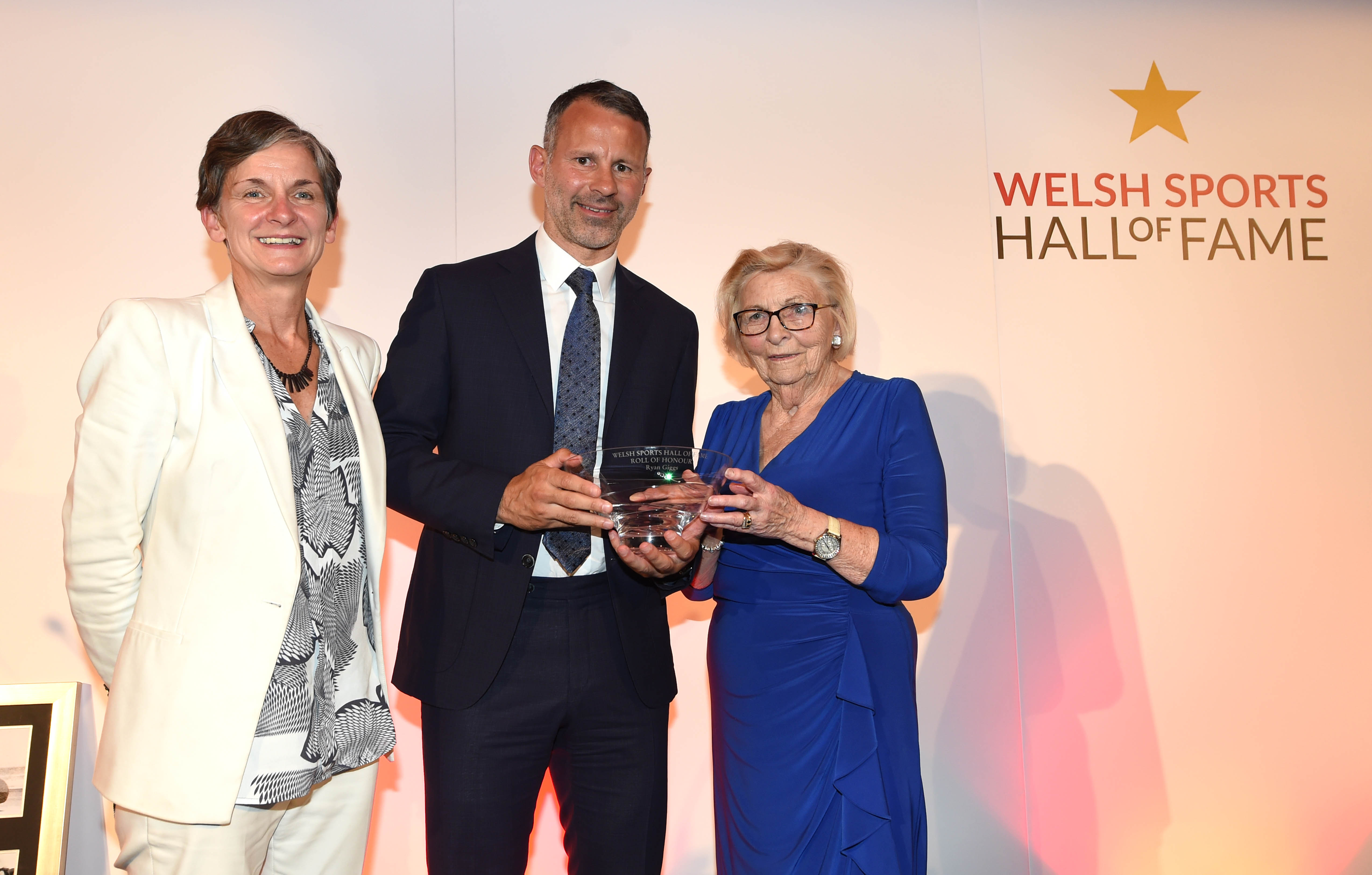 Ryan Giggs became the latest Welsh footballing star to be inducted onto the Welsh Sports Hall of Fame’s exclusive Roll of Honour on Wednesday night.

The Manchester United legend and current Wales manager, was one of five additions to the Roll of Honour at a ceremony held at Cardiff City Stadium.

In was also a great night for Whitchurch High School, who were presented with two special awards. The first, the ‘Rhodri’, in memory of the Welsh Sports Hall of Fame’s former chairman Rhodri Morgan, was presented to chair of governors Joyce Slack to mark the school’s huge contribution to sport.

And the former head of sport at the school, Steve Williams, was presented with the Lord Brooks Award for Outstanding Services to Welsh Sport for his work over nearly 50 years as pupil and teacher.

“We have added another famous five sporting greats to our roll of honour and it was fabulous to have Ryan, Michaela, Jazz and Steve joining an audience of nearly 400,” said Laura McAllister, chair of the Welsh Sports Hall of Fame.

“It was a special Welsh football moment when Esme Allchurch, the wife of the great Welsh winger Ivor, stepped up to present Ryan Giggs with his award. Wales is very fortunate to have produced so many great players and any nation would feel proud to have had an Ivor or Ryan in their side.

“The posthumous induction of Wendy White was a very special occasion for Welsh netball and we were delighted to welcome her brother Barrie White to the event. She was a towering figure in her sport as a player, coach and administrator.

“The Whitchurch High School contingent really helped to make the occasion as they brought along so many of their sporting heroes. They really have made a huge contribution to sport in Wales and we were delighted to honour Steve Williams, their former Head of PE, for the great work he has done over so many decades.”

Sponsored by Cardiff Metropolitan University, the event also honoured the memory of Peter Corrigan, in whose name the Welsh Sports Media Award is given. The 2019 winner was the chief sports photographer of the Press Association, David Davies, who broke new ground by being the first photographer to take the title on his own.

He had been due to cover the cricket World Cup match between New Zealand and Pakistan, but was switched to allegedly cover the induction of Ryan Giggs. He was ready to take the picture of the award winner when it suddenly dawned on him that it was going to be him. Howzat!

Giggs became the 23rd footballer to be inducted onto the Roll of Honour following in the footsteps of other former Wales managers Jimmy Murphy, John Toshack, Terry Yorath, Mark Hughes and Gary Speed.

Fenwick received his award from fellow 1970s Grand Slam team-mates JJ Williams and Graham Price, who have already been inducted.