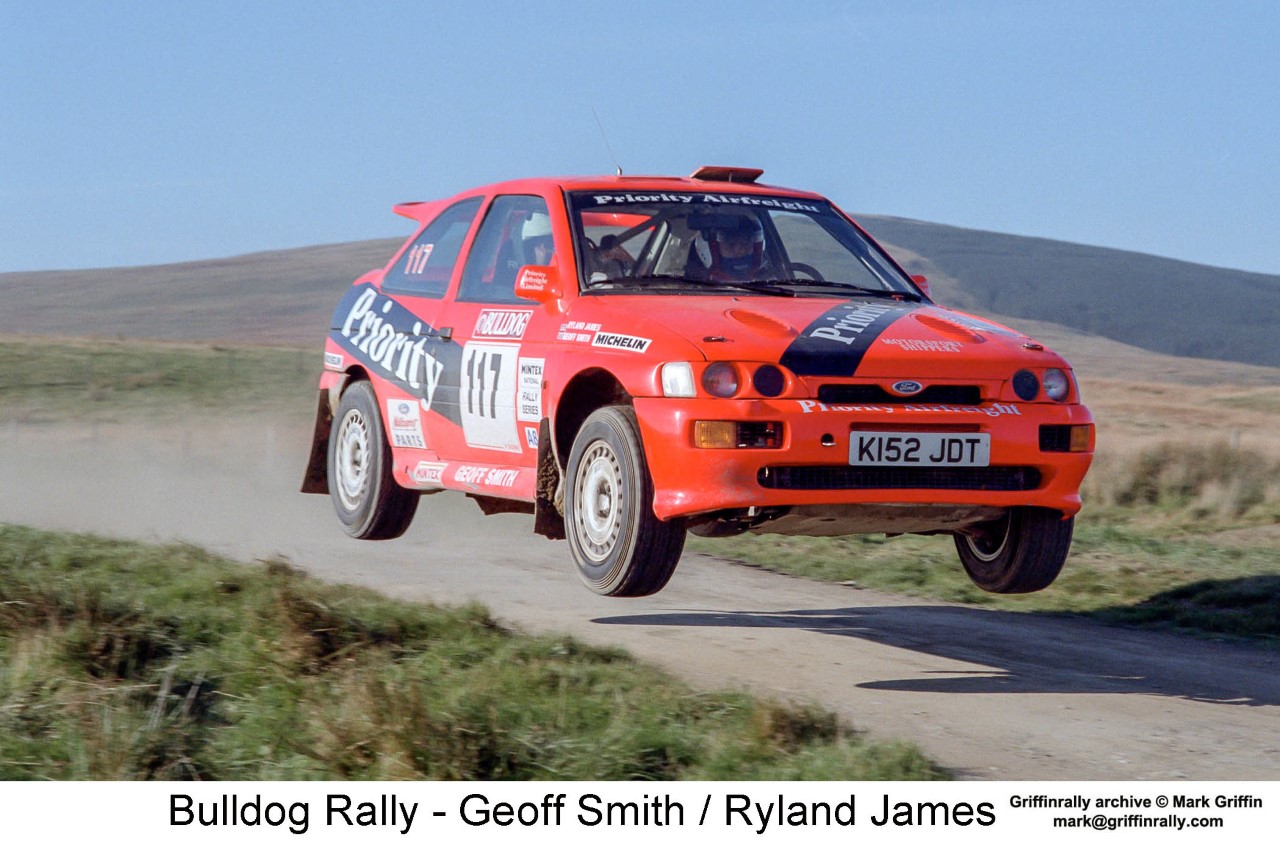 Ryland James is, like every other sports person in Wales, waiting patiently for his 2020 season to get back on track. But when it does, unlike everyone else, this year will mark the seventh decade in which he’s been competing as he tells Paul Evans.

To be still going strong in a sport he began in 1969, you might be thinking that it must be something gentle like croquet or fishing.

But Ryland James’ sport of choice for the last 50 years has been the full-on, high speed, adrenalin-filled and distinctively hazardous sport of rallying.

So, is rallying a passion, an obsession, or an addiction? The proud grandfather from St Clears in Carmarthenshire gives the question some serious thought, before returning with an answer that suggests it’s perhaps a mixture of all three.

“If I decide to do something in life, I go into it as deeply as I can,” he says. “I’ve always done it that way. I just need to know everything there is to know about it and do it as well as I possibly can. I can’t be on the fringe.

“Rallying just seemed to slot in well with the rest of my life. I’d travel to a rally on a Friday afternoon, do an event on a Saturday and be back home in time for Sunday lunch, so I had to take a minimal amount of time off work.

“Rallying also allows you to get away from everyday life. A very good driver called Tony Davies asked me to do the Trackrod Rally in Yorkshire. I met him for the first time over dinner of the Friday night and we’d done half of the rally on the Saturday before there was a bit of a delay and we started talking about other things apart from rallying.

“It was only then that I asked him what he did for a living, and he said he was a chartered surveyor, which is what I did!

“It took us that long to ask about normal life, and had we not been sat in a parked rally car killing a bit of time, we would not have even had that conversation.”

Davies was one heck of a driver – aggressive, talented and spectacular. With most of the car’s weight on the rear, and such a short wheelbase, if you got a Metro 6R4 sideways it was essential that your instincts and common sense didn’t kick in and instead you kept your foot pressed hard on the throttle, otherwise you’d be spinning like a top.

In total, he’s sat with over 80 drivers during his career – and that large number is a career choice.

“Around 1979/1980 I was doing a lot of road rallies with this one driver and the cam-belt kept snapping so we were retiring from pretty much every rally we started,” recalls Ryland.

“The driver eventually gave up for a while and I thought that whatever rally came my way next, with whatever driver, I would do, but I wouldn’t do another rally with that driver.

“People were wondering what was the matter with me, because I was getting some good results, but no driver would take me twice – although, at the time, it was of course my decision!

“If people think that you’re committed on a fairly permanent basis to one driver they don’t phone you and you don’t get the interesting and unexpected offers, so at that time in my career I was gaining a lot of experience in a short space of time.

“In fact, throughout my career I’ve been lucky to rally during several periods where there have been some great cars and great drivers.”

I first interviewed Ryland for a motorsports magazine back in April 1988 (32 years later, this is the follow up interview!) and he told me a great story about an early road rally event, where his sanity was brought into question.

“I remember you saying the story of my first rally with Brian Price,” says Ryland.

“As we went across Nant Y Moch, I thought I saw lights behind us and looked around thinking, ‘we’re going well, so who’s catching us?’

“Each time I did this, Brian upped the pace. After the third time, I realised that the light was in fact my navigators’ poti-light reflecting on the side window, and not a car behind.

“When someone asked Brian at petrol how he found me, he said ‘the bloke’s mad – I’m driving as hard as I can, but he keeps looking around to see if we’re being caught’.

After Ryland retired from full time work in 2007, he had the time to travel a lot further afield and has either competed or helped to organise events in North and South America, Africa, China, Australia, New Zealand, and all over Europe.

He’s 65 years young now, so the long haul flights no longer appeal, although rallying at home and in Ireland still very much does.

Ryland feared that his rallying career might be over in 2017. After an accident in Kielder forest, co-driving for Frank Cunningham in a Sierra Cosworth on the Roger Albert Clark Rally, Ryland had double vision.

Talking to Phil Mills, the 2003 world rally champion referred to his big accident with Petter Solberg on Rallye Deutschland in 2004 (when they hit a concrete Hinkelstein and destroyed a Subaru Impreza).

Phil told him that he had developed similar symptoms and had suffered double vision for six weeks after that.

Ryland’s double vision lasted for exactly the same length of time, convincing him that it was a direct consequence of the impact with a stout gate post.

“The trouble is that just over a year later the double vision suddenly returned,” said Ryland.

“Having not rallied at all in 2019, I saw a brilliant neurologist in that August who has a special interest in this condition and I was diagnosed with myasthenia gravis.

“It’s a condition that is not curable, but is relatively easily controlled. My neurologist got the medication balance right first time and I haven’t suffered any symptoms since. I thought my rally days were over, but my vision is as good now as it was 15 or 20 years ago.”

To celebrate, Ryland returned to the co-driver’s seat in September 2019 to partner his good friend Gareth Lloyd for the 86th time on the Escort Rally Special, finishing the Belgium event seventh overall in an Escort Mk2.

Less known, is that Ryland has also driven on about a dozen rallies – with much success.

His best result behind the wheel is when he finished an impressive fifth overall on the 1993 Virgo Rally on Epynt in an Escort RS2000 (with Gareth Lloyd co-driving).

It was an incredible result, given that the four drivers finishing ahead of him were Bob Fowden (Escort Cosworth), Dennis Moody (Sierra Cosworth), Pete Doughty (Sapphire Cosworth) and David Pattison (Escort RS).

He also finished second overall on the only road rally he has ever driven on, the 1992 Valley Services Rally (also co-driven by Gareth Lloyd) and he’s tackled several Builth Wells Showground Stages events, many co-driven by his daughter, Lowri.

His son, Owain, followed his mother Beti-Wyn (who’s sport of choice is Nordic Walking) and never showed much interest in rallying.

Ryland is a very proud father, and never more proud than he is today, as both his son and daughter are in the medical profession and hard at work amidst the coronavirus outbreak.

So what of the future? Plans to contest this month’s Tour of Epynt, which would have seen Ryland rally in seven different decades, have been put on hold by COVID-19.

But when the suspension on motorsport is eventually lifted and life returns to normal, Ryland will be the first out the door and back into action.

And that doesn’t necessarily mean co-driving, for he’s a prolific event organiser within his own Carmarthen Motor Club or assisting other motor clubs in a whole host of roles for which he has exceptional attitude and experience.

This October’s Fairfield Merlin Stages at the Welsh Motorsports Centre at Pembrey, for instance, will be his 50th event as an entries secretary, while he’s well known as a competition liasion officer, steward, marshal, a former clerk of the course of the Coracle Rally and an all-round sleeves up and get stuck in rally guy.

He also has the job of driving Michèle Mouton (as WRC safety delegate and WRC manager), around the route of Wales Rally GB.

Everyone else is too scared to do it, but typically Ryland – with his exceptional knowledge of the rally route and regulations, combined with his super smooth, calm and persuasive manner – and Michèle get on like a house on fire.

But it’s co-driving that Ryland loves most. Having started his career on 1 12-car event in Saundersfoot, co-driving for David Griffiths in an Austin 1100 borrowed from the driver’s mum (and no, she didn’t know!), he plans to be back in the navigator’s seat, and start his 583rd rally, as soon as possible.

“Long gone are the days of doing a road rally on a Saturday night and whizzing straight off to do a stage rally on the Sunday, but I want to keep ticking along,” admits Ryland.

“I’m still available for offers. If it’s a safely built car and a reasonably sensible driver, why not?”

After hospital stays resulting from accidents ranging from falling on a volcano in Chile to a DIY accident at home, Beti-Wyn advises him to, “cut out walking in the countryside and DIY – stick to sitting in rally cars. You’ve managed that for 50 years without injury!”