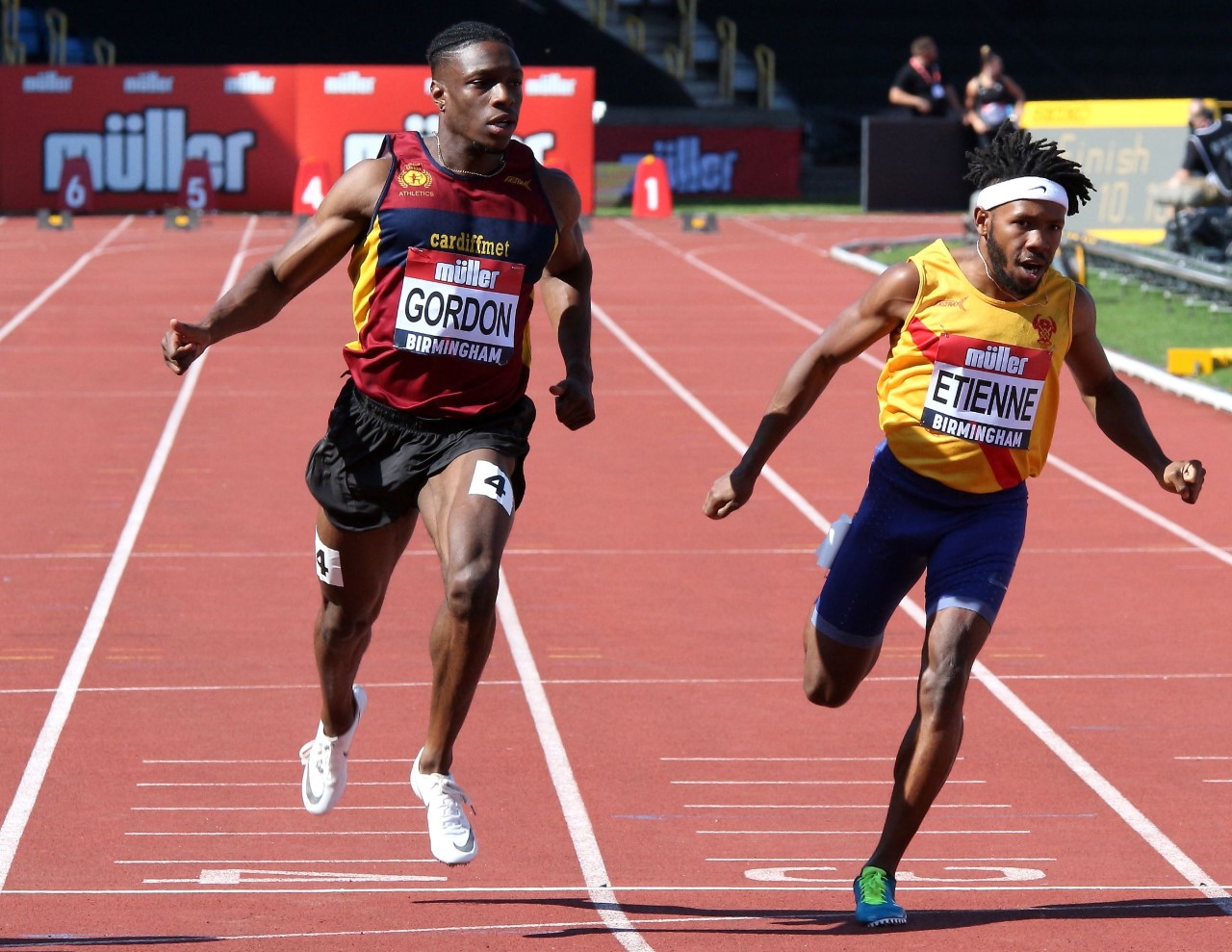 Sam Gordon is crossing his fingers that sixth place in the British Championships 100 metre final will be enough to earn him a relay place at next month’s World Athletics Championship in Doha.

On a mixed first day of the championships for Welsh athletes, Gordon fought his way through to the final, where he was up against the likes of Adam Gemili, Zarnel Hughes and surprise winner Ojie Edoburun.

In the first round Gordon cruised to victory and a place in the semi-finals where he was joined by 17-year-old Neath Harrier Owain Lloyd Hughes, who produced a brilliant run to finish second in his heat in 10.66.

The semis saw Lloyd Hughes bow out, but Gordon claimed a place in the final by equalling his personal best of 10.31 to finish third, despite a stumble early in the race.

A remarkable final at Birmingham’s Alexander Stadium, where medallists Edoburun, Gemili and Hughes were separated by thousandths of a second after clocking the same time, saw Gordon finish sixth in 10.43.

Afterwards, the Cardiff athlete said: “To be perfectly honest, I’m really disappointed in myself. I know I placed one place better than last year, I’ve come sixth and that’s potentially what I need for selection to the Worlds.

“But I still think I could have done a lot better. I’ll just see what the selectors say now and see what happens.

Commenting on his semi-final time, Gordon said: “It was an equal PB. I ran the same time as I did in Manchester, but that was in much worse conditions. I stumbled really badly, I thought my head was going to go through the floor.

“I tried to fight back and get back into the race, which I did, but I think that took it out of me for the final, so if my semi had been better executed, I probably would have had a better final.

“But fingers crossed now for the relay, hopefully they will take the top six.”

Former world champion Dai Greene claimed a place in Sunday’s 400m final as a fastest loser, but was far from pleased with his performance.

Greene, who had been restricted to just two competitive races this season due to injury, finished second to Birchfield Harrier Efe Okoro  in a time of 51.22.

The Swansea Harrier said afterwards: “It’s disappointing, I know I’m not at my best at the moment, I’ve been struggling for the last few months with my hip and hammy and if it’s not working then you see performances like that sadly.

“I raced a few weeks ago and my hip was really bad, but I raced last week and it was a lot better but I made a lot of technical errors.

“Today it didn’t seem to be playing ball and there were quite a few technical errors in there as well so I’m disappointed to be honest.”

Fellow Swansea Harrier Lauren Williams narrowly missed out on joining her clubmate in the 400m hurdles finals when she finished second in her heat in the women’s event. Unfortunately her time of 59.78 wasn’t enough to claim a fastest loser place.

The closest any Welsh athlete came to a medal on the first day of the championship was Welsh title holder Adele Nicoll in the shot put.

The Birchfield Harrier, who has enjoyed an excellent season claiming a number of medals  and a personal best of 16.34m, agonisingly finished fourth after landing a best distance of 16.17m with her penultimate effort. The title was won by Great Yarmouth’s Sophie McKinna with a throw of 17.97.

In the 3000m steeplechase final, Parc Bryn Bach’s Lauren Cooper finished fifth in a time of 10:55.80, behind champion Rosie Clarke.

But there will be more Welsh hopes for medals in Sunday’s finals, thanks to both Beth Kidger and Jade Williams producing excellent performances to qualify in the 1500 metres.

Brighton Phoenix athlete Kidger finished second in heat two in a time of 4:18.75, ahead of Amman Valley Harrier Williams, who was fourth in 4:19.76.

In the men’s event, Cardiff’s Rowan Axe narrowly missed out on a place in the men’s final after finishing fourth in his heat in 3:48.12.

Cardiff clubmate Owen Smith also missed out on a fastest loser place in the 400m after placing third in his heat in 46.95. Swansea Harrier Joe Brier was disqualified after a rare 400m false start.

Sunday’s schedule sees a full day of finals, including the men’s hammer where Liverpool Harrier and Welsh record holder Osian Jones will be hoping to challenge for medals, as will Bethan Rees in the javelin.

Full results from Saturday’s events, along Sunday’s schedule, can be found on the British Athletics website.

If you can’t make it to Birmingham, you can watch the action on BBC2 between 1pm and 5pm.