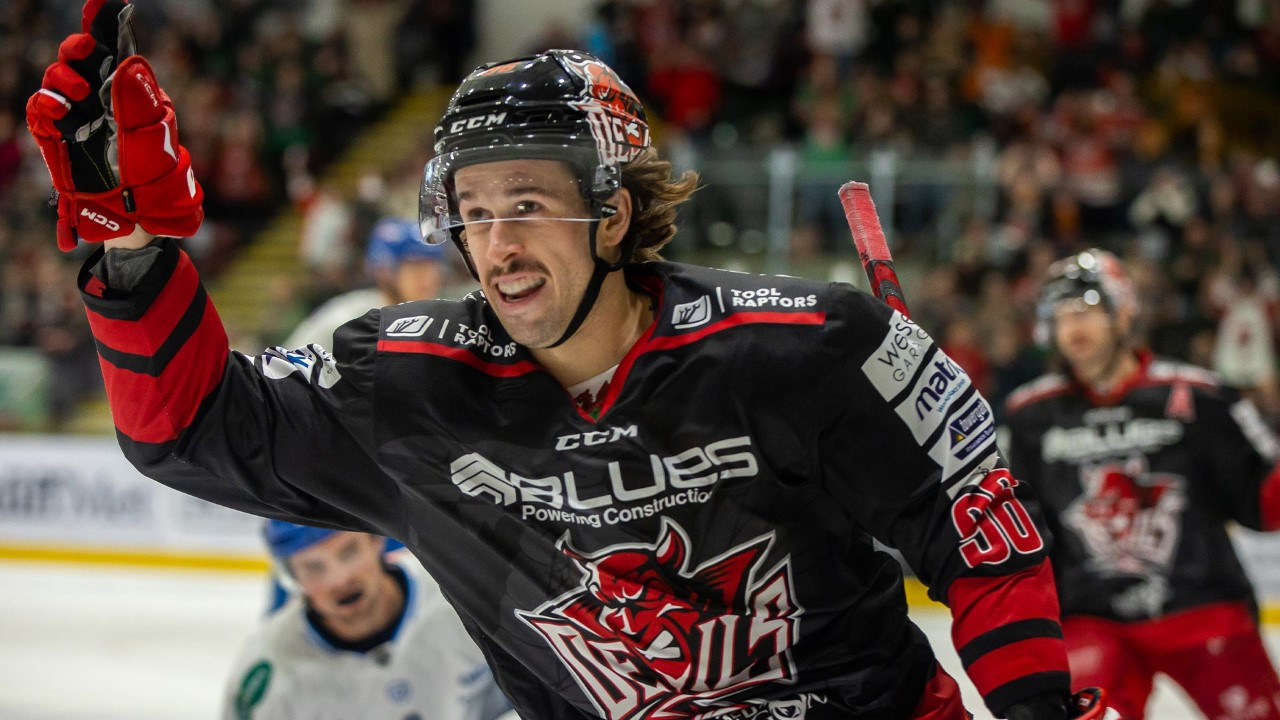 In a wild hockey game that threw up just about anything and everything, the Cole Sanford-inspired Cardiff Devils pulled through to claim a 7-4 win over the Fife Flyers. Somehow.

Power play goals, a short-handed goal, a hat-trick, a Joey Martin fight and even a Josh Batch goal, this potentially drab midweek game against tired Scottish opposition proved to be anything of the sort. And instead, a gripping game broke out that seemed akin to some sort of quirky Devils hockey bingo.

Fife have just three wins to their name this season and left Cardiff Bay empty handed, but boy, did they give it a go.

After seeing their early lead wiped out, the Flyers rallied from 2-1 down through their efficent power play to take a 4-2 lead, until Ryan Penny’s fine short-handed effort late in the second period revived the Devils.

“It feels like right now, a lot of the things that happen to us, we do it to ourselves but I’ll give Fife credit – they came down here ready to play, their power play was clicking,” said Brodie Dupont.

“I was really happy with how we pushed back in the third period and got the win, which is what matters but obviously, we don’t want to dig that hole if we don’t have to.”

The Devils tied the game up 92 seconds into the third period through Jake Coughler’s power play marker, before regaining their advantage through an unlikely source in Josh Batch, who fired a wrist shot from just inside the left face-off circle for his first goal of the season.

“Going into the third period, we felt if we could play our game, we could get a quick goal and get momentum, so it was a huge goal by Batch – it was just one of those games where we found a way,” explained Dupont.

Sanford continues to illuminate the Devils offence this season and completed his hat-trick as he made it 6-4, with his 11th goal of the season.

“It’s great to see him getting rewarded. He’s shooting the puck tremendously well, he’s got some good line-mates and it’s clicking for him,” Dupont said of Sanford, who now leads the EIHL in goals following his latest haul.

“Obviously, we want all our players to be playing with that time of confidence so when Cole’s not on, we need other guys to score.

“When Cole’s on we would like to have everybody scoring, but sometimes that’s just how a team goes.

“It’s like golf – sometimes your driver’s on and your putter’s off. I’m happy for him, he’s been playing extremely well and we want him to keep going at that pace.”

Coughler added his second of the night with an empty-netter to seal a hard-fought victory.

Fife had gotten off to a perfect start when Brayden Sherbinin fired a shot through traffic to beat Ben Bowns just 2:41 into the game on their first power play.

The Flyers special teams would prove to be a constant thorn in the side of the Devils, converting three of their seven attempts.

And after Sanford had scored twice to put the Devils 2-1 ahead, Dillon Lawrence struck twice himself on successive 5-on-3 penalties in the second period to restore the Flyers’ lead.

“The second period was where we really shot ourselves in the foot, it’s hard to get momentum when you’re just killing penalties but they say a win is a win.”

After Penny’s short-handed goal gave Devils a reprieve, Joey Martin uncharacteristically dropped the gloves with Fife’s Lucas Sandstrom after the buzzer had signalled the end of the second period, forcing both players to spend the start of the final period in the penalty box.

Ben Bowns made 27 saves for the win as the Devils improve their record to 8-3-1 in the Elite League, and remain on the coattails of leaders Guildford Flames, who have a six-point lead, but have played two more games.

“Overall for 40 minutes, I thought we were really good but we just have to stop hurting ourselves. The wins and losses will come and the wins should look after themselves, but we’ve got to stop doing it to ourselves,” surmised Dupont.

Thursday will be a rest and recovery day for the team as they begin preparations for Friday night’s home game against the Nottingham Panthers. They then travel to Belfast on Sunday for their first visit of the season to the defending league champions.

Ticket information for all forthcoming Devils games is available via the team’s official site.