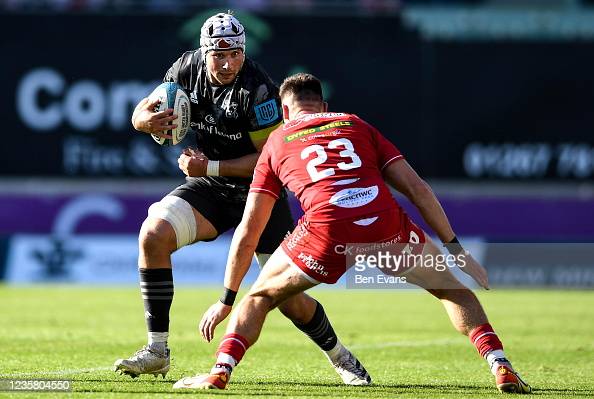 Scarlets head coach Dwayne Peel has told his players not to dwell on their six-try, 43-13 defeat to Munster, but focus on putting things right ahead of Friday night’s trip to face reigning champions Leinster in the United Rugby Championship.

A Munster side showing 11 changes to the team that had comprehensively beaten the Stormers 34-18 the previous weekend made it three bonus-point wins in a row with their big win at Parc Y Scarlets despite the home side welcoming back their British & Irish Lions.

“The truth is we were second to everything. That’s disappointing because it was something we had worked hard on,” admitted Peel.

“The result is one thing and the performance followed suit. We had an average start and we know we need to get better.

“There were a couple of defensive lapses for tries and we didn’t look after the ball well enough. We spoke in the changing room afterwards that it was not acceptable for us.

“We can’t dwell on it because we play in six days time. We have a chance to put things right and we need to get our minds and bodies right before coming back into work on Tuesday.

“Leinster is a tough place to go and we will look into the technical and mentality side. Our mentality wasn’t there against Munster.

“We have to review not just the game, but also the week, to see where we were at. It’s early season and we have to learn from it.”

Munster plundered seven turnovers, four of them from man of the match Chris Cloete, and the Scarlets missed 21 tackles on an afternoon they will want to forget. They now sit 10th in the 16 team tournament, the lowest-ranked of the four Welsh regions, while the three unbeaten Irish provinces are on top – Munster, Ulster and Leinster.

🎥 Rob Evans sums up the disappointment after today’s loss

“We have to accept it was not up to standard and that was across the board. We then have to come into work and put things right,” added Peel.

“We thought we had a decent preparation going into the game, so that was the disappointing factor. There were a few elements we were not happy with.

“First and foremost our breakdown work was not up to standard and did not allow our game to flow. They targeted us close to the rucks and we have to sort that out.

“There were a lot of areas in which we need to improve. Munster were better and hungrier in most areas, which was disappointing.”

To add to his problems, Peel is sweating on the fitness of two players ahead of the trip to Dublin at the end of the week. Wales centre Scott Williams has a cut around his eye, while No 8 Sione Kalamafoni took a knock to the head that means he will have to go through the HIA back to play process this week.