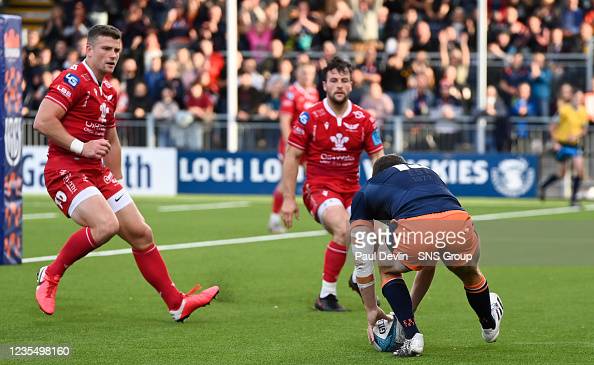 Scarlets head coach Dwayne Peel is looking forward to the challenge of taking on a new opponent when his team face the Emirates Lions on Friday night.

South African outfit Lions are the first of the four United Rugby Championship sides from the Rainbow Nation to arrive in Wales this season.

They take on the men from Llanelli (kick-off 7.35 pm, BBC Wales) with the Scarlets looking to bounce back from their round-one defeat at Edinburgh.

By contrast, the Lions will hope to make it two wins from two after beating Zebre 38-26 on Italian soil.

“We are very excited,” Peel said.

“We have scouted the Lions through the Currie Cup and we took a lot from last week’s game versus Zebre. They were very impressive in the first half and punished Zebre with every opportunity they got.

“The fact the four big South African franchises are in the URC is great for the league and we are looking forward to the challenge on Friday.”

HOME IS WHERE THE ❤️ IS!

New Scarlets signing WillGriff John will make his first URC start against the Lions with Peel making four changes from the Edinburgh game.

Tighthead prop John arrived in west Wales from Sale Sharks in the summer and swaps places with Wales international Samson Lee who is named among the replacements.

There are two changes behind the scrum with Tom Rogers coming in for Ryan Conbeer on the right-wing and Sam Costelow getting the nod over Dan Jones at fly-half.

Scott Williams and Jonathan Davies, who combined impressively in the Scottish capital, continue their midfield partnership with Davies again captaining the side.

Up front, John packs down alongside Rob Evans and Ryan Elias while there is a new second-row pairing of Jac and Tom Price. Aaron Shingler and Sam Lousi are both ruled out through injury.

The back-row of Blade Thomson, Dan Davis and Sione Kalamafoni is retained.

On the impressive showing of Williams and Davies in Scotland, Peel added: “It’s not unexpected. They’ve trained really well is the honest truth.

“It was good to see Scott and Jon back together and performing after they’ve excelled in pre-season.

“I’m pleased for them. It was Scott’s first 80 minutes in 11 or 12 months and I thought they both looked fit and well and full of running.

“It’s great to see them both back and they’re definitely going to improve. They’re both eager and in terms of our group, they’re two very important individuals.

“They obviously contribute on the field but off the field, they’re leaders and drive a lot of standards.

“They are very vocal players and love playing for the Scarlets.”

The Lions have named an unchanged match 23 to face Scarlets after impressing at Zebre.

Head coach Ivan van Rooyen believes his team have confidence going into the game after a winning start to their campaign last week.

“We appreciate that Scarlets will pose a different challenge for us, but we are confident the players selected will once more aim for a positive result,” he said.

“The team has prepared well in the lead-up with a few productive planning sessions on and off the training field.

“Last week we spoke about momentum and that’s what we would like to maintain from here onwards.”