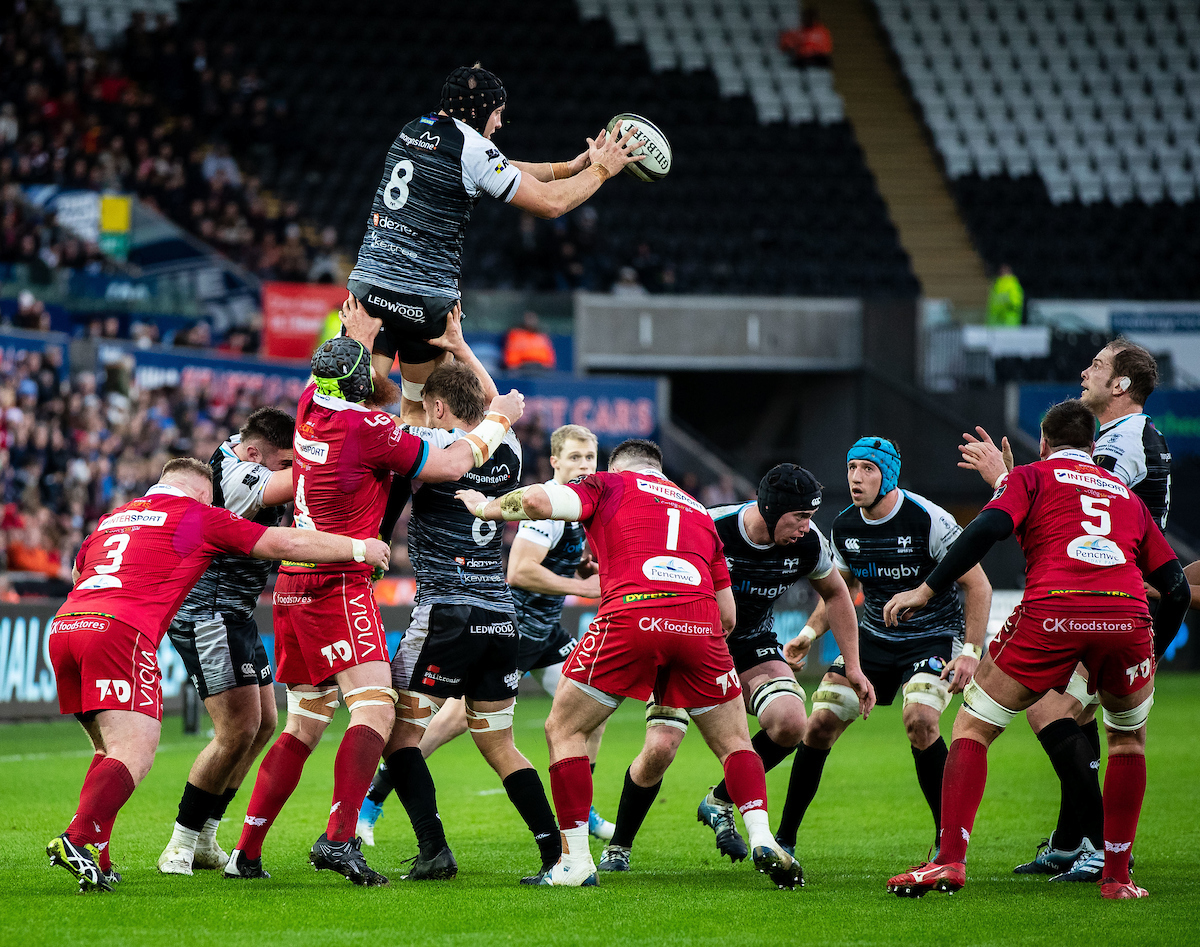 James King in action as the Ospreys take on the Scarlets. Pic: Simon King/Replay Images.

First it was on, then it was off. Then it was just another back-of-the-fag-packet plan tossed into the bin after 15 months of waiting for Welsh rugby’s leaders to show the way ahead. The shambles of Project Reset is picked over by David Williams who just wants to flush the chain and run away.

When is a merger not a merger? When it’s a takeover.

That seems to be at the heart of the ‘on-off’ relationship between the Scarlets and Ospreys and their proposed gathering of the west Wales clans for the betterment of Welsh rugby.

But who proposed such an unhappy and unlikely marriage in the first place? That seems to be the question exercising most people. Was it a WRU suggestion, or did it come from the supposedly cash-strapped Ospreys?

Whoever came up with this ugly one-sided idea, it already resembles an unsightly turd floating in the pan. Someone needs to flush it away quickly and purify the atmosphere.

Given the dramatic, all-guns-blazing resignation of Ospreys chairman Mike James at the start of the Professional Rugby Board meeting yesterday, it certainly won’t be him.

Step forward from stage left his business partner, Rob Davies, who now occupies one of the hottest seats in Welsh sport.

This was the parting shot from James to Welsh rugby and the PRB:

“None of us doubt that regional rugby requires restructuring in order to ensure the long-term sustainability of the game.  The way in which this has been handled, however, is nothing short of chaotic, resulting in a fatal combination of uncertainty, conjecture and insecurity now hanging over regional rugby’s future.

“To methodically, rationally and impartially map out the future of regional rugby is one thing, to fatally wound it with an ill-judged, cavalier process is another.  We now have the worst of all worlds – a lack of clarity, a lack of transparency and a total inability to plan ahead.

“We can no longer make sound rugby or business decisions and nor can our players or commercial partners.  Project Reset has become Project Inept.

“I cannot and will not be a party to this level of catastrophic mismanagement and today I’ve make the decision to stand down as both chairman and a director of the Ospreys, surrendering my position on the PRB.

“The only responsible way forward is to now accelerate the plans for a holistic and meaningful restructuring of the game, not delay them or force asymmetric outcomes to emerge.  Certainty has to be restored to the game and quickly.

“The restructuring process itself has to be revisited, with appropriate checks and balances, independent oversight and transparency.  We already have so many disadvantages in keeping pace with the professional game, we don’t need more.”

Davies knows a thing or two about making money, investing in professional sport and dealing with difficult situations.

He was around – and put his shoulder to the wheel – when Swansea City needed saving and has the stomach for a fight. Like James, he doesn’t deal in capitulation.

So, expect more fireworks as Davies gets to grips with internal dealings of the merger deal, starting with a full legal and financial forensic review of the WRU’s actions in administrating Project Reset.

Davies is promising to investigate the independence of the WRU’s role given its conflict of interest and the lack of appropriate transparency and adequate governance in the Project Reset process.

He will also poke his nose in the direction of inducements by officers of the WRU for the regional side to commit further private funds to the game, whilst those same officers were acting against the interests of those investors.

Hence the Mexican stand off that the PRB now finds itself facing. There is little doubt there is room for manoeuvre for a merger between the two west Wales regions to ensure a better future for the professional game in that area.

One viable playing and financial entity is better than two flagging businesses.

But if everyone is supposedly thinking the unthinkable, what about the two in the east? Are Cardiff Blues and the Dragons considering a merger – two regions that between them have not managed a single Welsh-Scottish/Celtic/Pro12/14 league title between them in 16 years whilst the Ospreys have managed four.

But even if a merger goes ahead, and that remains a big IF, it is the minutia that will make the difference between success and failure. When the Celtic Warriors became extinct in 2004, none of their fans crossed over to supporting Cardiff Blues.

When the Dragons were the Newport Gwent Dragons it was their very name that stopped many fans from supporting them. What’s in a name or an identity? Everything! The devil remains in the detail.

Two weeks ago it seemed as though the status quo would prevail for another season, four regions ploughing on regardless and probably delivering even more mediocrity. This week the Scarlets were happy to leak details of the deal and confidently predicted the deal was done.

Perhaps, they knew that a 70-30 split in their favour was less of a happy marriage than a shotgun wedding.

Martyn Phillips, CEO of the WRU, was called in by Warren Gatland to try to give the international players some assurances on where things were going on Monday. He appeared to smooth things over, the players felt calmer and more assured.

“There is no doubt it has been a challenge for the players in the last couple of days. That’s why we had Martyn Phillips down here yesterday addressing the players, just trying to put them at ease in terms of what is going on, ,” said Gatland.

“There has been a lot of criticism of the WRU in the last 24-48 hours, and I think some of it has been misinformation about actually what has happened. I think everyone needs to take a breath and see what the outcome of this meeting is.

“Hopefully, collectively, with the Union and the regions, we can work together to find a solution that is the best outcome for the players, for the fans, for the sponsors and development and progression of the game, and ultimately for the national team.”

But a day can be a long time in Welsh rugby politics. The team announcement for what is a pretty big game at the weekend in Scotland was brought forward by two days and no sooner had James’ resignation press release hit the airwaves than ‘three became one’ on the top table at the Wales press conference.

Gatland gave his pronouncement on proceedings and then Wales skipper Alun Wyn Jones, his Ospreys team mate Justin Tipuric and the chairman of the Welsh Rugby Players’ Association, Scarlets skipper Ken Owens, were due to give their take on the current machinations.

There was a quick change of plans and Owens was left to fly solo. He made a good job of it, too, and provided the one answer that every Welsh rugby fan wanted to hear when he said none of what is going on will affect the team this weekend.

Did the chat from Phillips settle a few nerves in the Welsh camp? “Yes it did,” insisted Owens, “although there were still certain questions to be answered.”

He was pretty honest and at the end of the day, in whatever guise, he and the PRB are committed to four regions.

“Whether we like it or not, or whether there are mergers and teams opening up in north Wales, at least there is work for 230 professionals in Wales, which at times there might not have been because everything has been on the table. I’d be a lot happier seeing four regions and 230 boys in work than going down to three and 40 or 50 players falling out of work.

“At this late stage markets are starting to close with boys out of work. It is hugely frustrating this has dragged out. We understand things in Welsh rugby need to change and an assurance was given that everyone is working as hard as they can and there will be four regions.

“There is a little bit of anger, of course. For someone like Alun Wyn or myself, who have been one club men and played for one region, there is a question of how is the new entity going to look? They obviously can’t answer.

“I know things happen quickly and are never straightforward in Welsh rugby, but there is anger because there is still the decision where some boys have got offers over the bridge. Do they take that offer to secure their livelihoods or do they wait to see what happens in Wales?

“There is still uncertainty, but I’ve got to play a little bit of devil’s advocate in my role as chairman of the players’ association and look at the bigger picture, which is. ‘will there be work for players in the future at four regions?”

Welsh rugby is used to bloody board room battles. David Moffett’s rapier cut a swathe through nine Welsh clubs in 2003 as he reduced them to five regions. A year later he had no hesitation in cutting the number to four when the Warriors’ fell into financial ruin.

Four appears to be the magic number from a playing perspective, according to Gatland. It also happens to be the number needed to continue to receive the same level of funding from the European and PRO14 competitions.

Whether it is right to consider combining the two strongest regions of the past 16 seasons and replace them with a new, lesser funded entity in the north of Wales is a different debate.

That seems to be the most desirable option to many around the PRB board at present.

But the exclusion of the most successful region of all, in Wales’ second biggest city, boasting the biggest and best venue – and the only region who went through the pain of a proper sustained merger before when Neath and Swansea joined – well, that seems more of a suicide note than a grand plan.

Will it happen? It could still do. Something has to happen. No longer can regional rugby continue to deliver such mediocre fare as it has done this season.

And as to a suck it and see new region in north Wales – well that truly is a stab in the dark.

One thought on “The Scarlets’ Takeover Of The Ospreys . . . An Ugly Turd Of An Idea That Needs To Be Flushed Away”