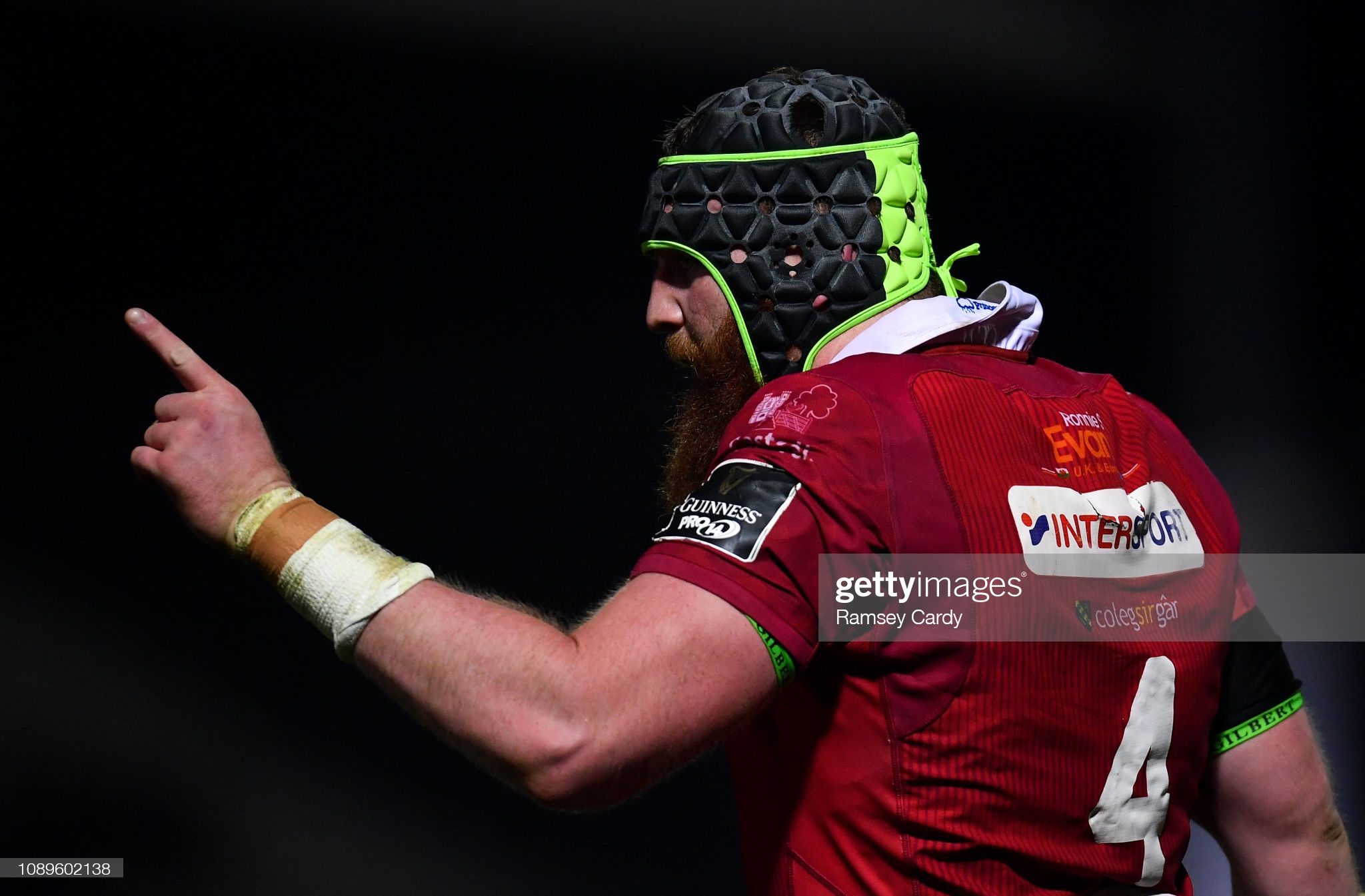 Jake Ball is leaving the Scarlets at the end of the season. Pic: Getty Images.

The Scarlets will begin 2021 where they started 2020 – as the Welsh region the others are chasing. It’s a status their famous son Phil Bennett believes they can maintain this year and he told Graham Thomas he expects early notice to be served on New Year’s Day at home to the Dragons.

Phil Bennett has backed the Scarlets to bounce back from the loss of Jake Ball and continue to set the standards in Welsh rugby.

The Wales and Llanelli legend – always a regular attender at Parc Y Scarlets up until the pandemic – admits the confirmed departure of Ball will be a significant blow to region and country at the end of this season.

But Bennett still believes Glenn Delaney’s Scarlets will remain the strongest of the four Welsh teams, a status he thinks they will confirm on New Year’s Day when they host the Dragons in a Guinness Pro14 derby that is live on S4C.

After much speculation, Ball and the Scarlets announced on Tuesday that the 29-year-old would be leaving at the end of the campaign to join his wife and four children in a new life in Australia.

“Jake Ball has been a really outstanding player for the Scarlets,” says Bennett about the second row who joined the region when he arrived from Perth in 2012.

“He’s provided excellent value and service for the region and for Wales.

“It will be a big blow to the Scarlets when he goes, but I think he no doubt feels the place he should be at the moment – with everything that is going on in the world at present – is with his wife and kids.

“It makes sense for Jake to go to Australia. It would be very hard for him to just concentrate on playing his best rugby if his wife and kids are on the other side of the world for the long term. It’s not very realistic.

“But Jake Ball has become a very good player for the Scarlets and is perhaps under-appreciated by some people.

“He has added a ball-carrying aspect to his game more recently. Before, teams would chop him down and he wouldn’t make much ground.

“But now, rather like Alun Wyn Jones, he has worked on his body position, and he’s much more useful now as a ball-carrier who can make valuable yards.

“He offloads well and he’s a big, strong man. He adds a lot of power at the scrum and he wins his share of line-out ball, too. So, when he added that ball-carrying weaponry then he became a pretty decent all-round second row. He’s been outstanding.”

Ball played a full 80-minute part in the Scarlets’ 16-14 victory over the Ospreys on Boxing Day and is likely to be in the side again on Friday as he starts his countdown to departure.

During his time at the region, they have won the Pro12 title in 2017, been Pro14 runners-up in 2018 and made two further semi-finals, as well as having reached the semi-finals of the Heineken Champions Cup in 2018.

In Wales, only the Ospreys have come close to that kind of record in the past eight years, although their success has dried up in recent seasons.

Bennett, who was captain of the star-studded Scarlets team of the Seventies that won four successive Welsh Cup finals and famously beat the All Blacks, believes the daylight between Delaney’s team and the three other Welsh regions will continue – Ball or no Ball.

“I think the Scarlets will continue to be the standard-bearers in Wales for a while because they have the strongest squad, with the best depth. They have some good young forwards coming through.

“The Ospreys are heading in the right direction again, which is good to see, the Cardiff Blues are also improving, but still need to find consistency, while the Dragons are getting better, although they’re coming from a long way back.

“But the Scarlets have continuity of success and a big amount of credit for that has to go to the coaches.

“Brad Mooar did very well in a short space of time and Glenn Delaney has built on that this season.

“Glenn very much wants players to feel as if their family comes first, which is why he supported Jake Ball’s decision. Rugby is important, but at the end of the day it is family that has to be No.1.

“I like the way Glenn praises the players after matches, rather than runs them down. But if they’re not playing well enough, he will refer to them having to improve the level of skills. That’s shrewd management.”

The last time the Scarlets met the Dragons was back in August, when the gap between them was comfortable in a 41-20 victory for the men in red.

But this time last year, the Dragons notched a famous 22-20 win thanks to a last-ditch drop goal from Sam Davies.

We also remember those we lost this year #ScarletsFamily

Bennett adds: ”The Dragons always give you a tough game in these derby matches, where there’s pride at stake. Dean Ryan is no mug. He’ll want to come and spoil the party.

“But on a drying pitch, then you have to fancy the Scarlets. They will want to win, but they’ll want to do it with a bit of style.

“The team like to have an attitude that if it’s on, then they will try and run it and score from anywhere. They scored some very good tries at Bath and also showed great fortitude in defence.

“It should be a fascinating game, but the Scarlets wings are in sensational form at present – guys like Steff Evans – and I think they’ll win.”

Join the Clwb Rygbi team for live coverage of the Guinness PRO14 rugby derby match between Scarlets and Dragons, which is being played at Parc y Scarlets. Kick off 5.15pm.

One thought on “Scarlets Will Have A Ball In 2021, Says Phil Bennett . . . Even Without Big Jake”