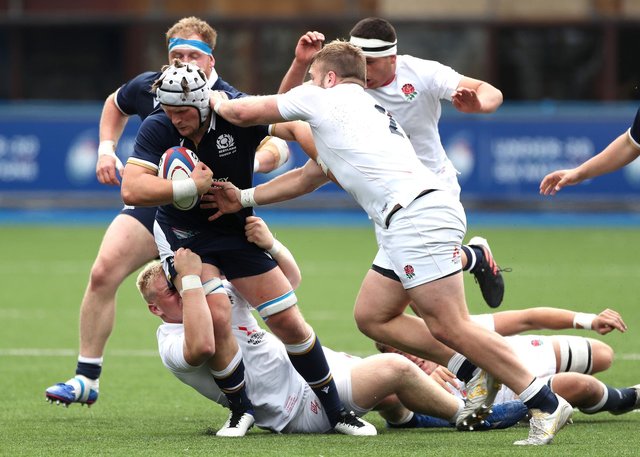 Ollie Leatherbarrow in action for Scotland U20 v England U20. Pic: Getty Images,

Ollie Leatherbarrow insists he and school pal Murray Redpath can lead a Scottish turnaround when they face Italy in the U20 Six Nations Championship on Thursday.

The Scots have begun the tournament with two defeats, even though they showed flashes of inspiration against two powerful sides in Ireland and England.

Now comes Scotland’s chance at getting off the mark at Cardiff Arms Park, where the entire tournament is being hosted, in an afternoon clash that is live on S4C Clic.

Openside flanker Leatherbarrow scored a try against England and made a number of crucial turnovers as the former Sale academy player proved why he is highly rated.

Like scrum-half Redpath – son of former Scotland half-back, Bryan – Leatherbarrow played all his early rugby in the North-West of England, where he was a teammate of Redpath junior.

“I went to school with Murray at King’s School in Macclesfield and we’ve played together since we were 11 years of age,” says Leatherbarrow.

“I’ve known him for ages and I know his game. He’s got great talent, as has Christian Townsend alongside him.

“We have Alex Samuel and Max Williamson in the second row, who have both already trained with the senior squad. We also have Ben Muncaster at No.8 who is a phenomenal player.

“So, we have talent all over the pitch. What we haven’t done is put it all together for an entire game yet.

🏴󠁧󠁢󠁳󠁣󠁴󠁿 Murray Redpath can be a leader for Scotland U20s, says Sean Lineenhttps://t.co/HkbKDhQnw7

“It’s something we have looked at this week. We have wanted to be able to execute better. That’s our main goal and what we’ve worked on in training.

“Hopefully, against Italy we will be able to convert our chances. We’ve had a couple of tough results, but we have managed to keep our heads up.

Leatherbarrow – who is now a student at Exeter University – owes his Scottish qualification to a grandmother from Perth, but has been shaped and moulded by the Scottish pathway at international level.

“I have been with Scotland since the U16s, through the Scotland-qualified programme. I did the U18s last year but that was cancelled due to Covid, unfortunately.

“This tournament has thankfully gone ahead but It’s quite tough being in this hotel environment, 24/7.

“But we know we are in a privileged position to be able to play rugby at a really good level.

“When it gets tough, then we remind ourselves of that. I had a couple of internals games at uni before the tournament and we also had a couple of warm-ups against England as well.

“Before that, the last time I played a rugby match was probably the U18s academy league in February 2020. So, it’s been a long time and I was itching to get out there when this tournament began.”

Your Scotland team to play Italy in tomorrow’s Under-20 Six Nations fixture in Cardiff. 🏴󠁧󠁢󠁳󠁣󠁴󠁿#AsOne | #SixNationsU20

Like Scotland, the Italians have also lost their opening two games, but the Azzurri’s single losing bonus point means it’s the Scots who currently prop up the table with three rounds to go.

Leatherbarrow is confident that position will not be theirs at the end of the tournament with Scotland having already had to face the two favourites in Ireland and England.

“We knew England were going to be tough and Ireland are always good at this level now. They had a Grand Slam two years ago and were on track for one last year.

“So, we knew they would present a big challenge and I thought we were a bit unfortunate on both occasions.

“We know Italy are a good side. They are a big, physical team and very passionate like ourselves. We’re expecting a tough battle.

“They have only conceded two tries in two games so it’s going to be a tough challenge, but it’s one we’re up for.”

With many of the U20 players under scrutiny from clubs seeking out fresh talent, Leatherbarrow is one of those currently unattached to a senior club who have been catching the eye.

But the back rower insists his focus is purely on Scotland getting off the mark and he is not viewing the tournament as a showcase.

“I really enjoyed the Sale academy. I captained the U18s side last year. I’ve not a bad word to say about Sale. A few of my mates are still there are they are enjoying it.

“I’d like to think the coaches there think highly of me, but I don’t have a connection with Sale any more.

“I’m at uni at present. I’d love to be involved with a club at some point, but I’m just focusing on the U20 Six Nations at present and we’ll see what happens from there.”

Match coverage on S4C Clic will have the option for Welsh or English commentary. Quick, free one-time registration required to use S4C Clic.