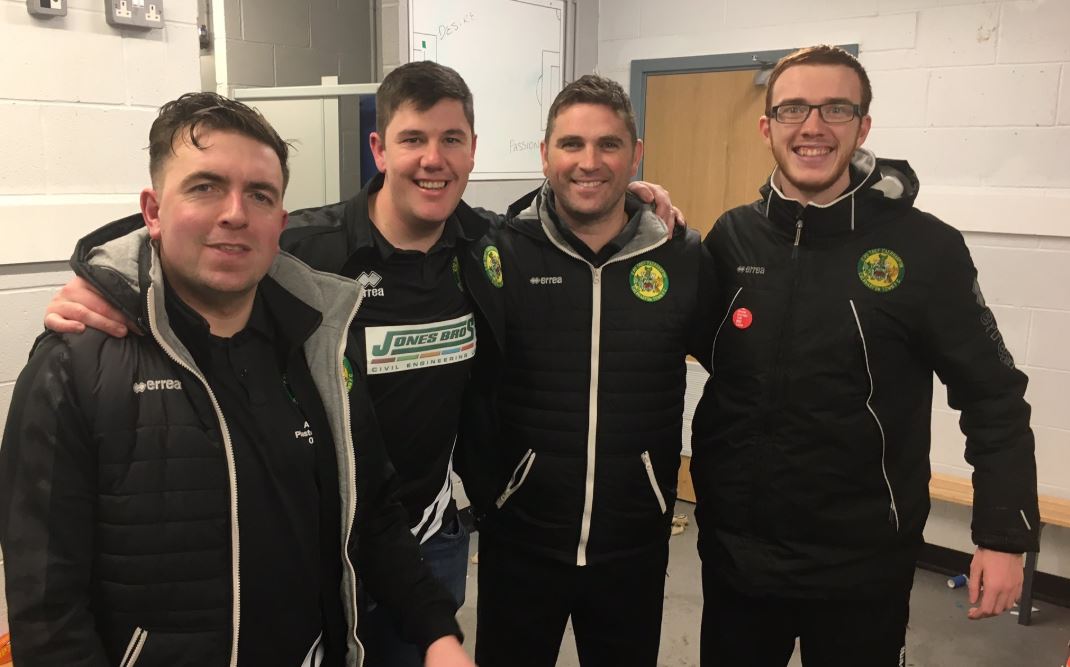 Sean Eardley believes Caernarfon Town are on a roll after they rumbled into the last eight of the JD Welsh Cup with a 2-1 victory at their big rivals Bangor City.

Gareth Edwards scored the winner which took his side into the quarter-finals in the first meeting between these noisy neighbours for a decade on Saturday night.

It means Caernarfon can now look forward to the prospect of a last eight Cup tie as well as more potential success in the Welsh Premier League, having secured their top six finish for the second stage of the campaign.

“This was a great result but we need to kick on and make the most of this momentum,” said Eardley, brother of Wales international Neal whose second season with the club threatens to be as eye-catching as his first.

“It was a massive occasion for both sides and a lot of the players hadn’t experienced pressure like that before. There was a lot of banter flying about, but it was all good natured.

“We now have the first match of the second stage in the league to look forward to, against Barry, and we’re keen to keep this going.”

Bangor recovered from falling a goal behind, scored by Jamie Breese, in front of a packed crowd of 2,500 at Nantporth and equalised just before the interval through Jake Phillips.

But Edwards deservedly settled the tie on the hour mark with a skillful flicked header from an accurate Jamie Crowther cross.

It was a goal good enough to decide any Cup tie and it brought the lively Cofi Army behind Bangor’s goal to full voice.

Eardley added: “The boys showed a lot of discipline, but this win was for the fans. Everyone could hear the noise they were making.

“It was a big blow to concede just before half-time. They had a succession of corners in the first 20 minutes and we dealt with them well. But with 30 seconds left, we conceded which was frustrating.

“But I said to the boys, we need to show a lot of character because that goal would have lifted Bangor. And then we had that bit of magic from Gareth Edwards.”

Elsewhere, all the fancied teams took their places in the last eight – including Holders Connah’s Quay Nomads who came from behind to beat Carmarthen Town 3-1 at Richmond Park.

Proud of the players,proud of the club and proud to lead my @CaernarfonTown team in front of our magnificent supporters,what an occasion to embrace!!
Best get back in my cage now 😉💛💚

A Liam Thomas penalty had put the Old Gold in front early on, but Michael Wilde equalised for the Nomads before the break.

Two quick goals after the restart sealed the win for the visitors, with first Andrew Owens and then Callum Morris from the penalty spot ensuring Andy Morrison’s side progressed.

Cambrian & Clydach Vale recoved from the disappointment of losing to Cardiff Met in the Nathaniel MG Cup last week to beat Rhyl 3-1 on penalties after the teams finished level at 2-2 at the M&P Group 3G.

The Met stayed on course for a Cup double with a 3-1 victory at Aberystwyth, the New Saints won 5-2 at Airbus, and Barry edged past Cefn Druids at home, 3-2.

While the Nomads earned that convincing win at Carmarthen, Bala Town were even more empahtic on their travels with a 4-0 thrashing of Haverfordwest, and Llandudno ended Llangefni’s run with a 3-1 win at the Welsh Alliance club.