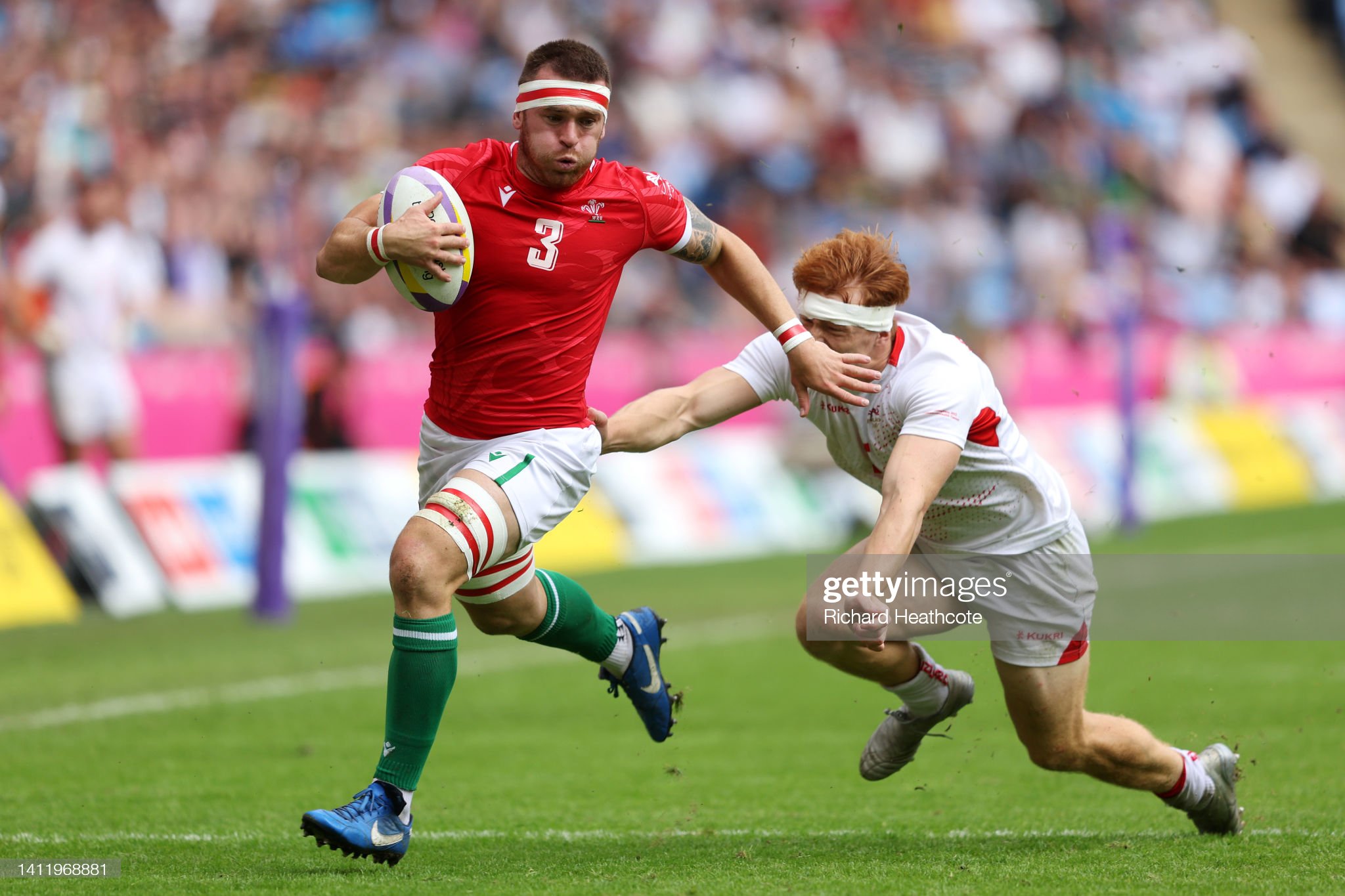 Wales Sevens is due to be replaced by a GB 7's. Pic: Getty Images.

“Whoever is in charge of our sevens operation, including player selection, is out of his depth and needs replacing ASAP. If we accept this mediocrity and the hammerings that go with it, we should forget it and use the money elsewhere,” raged a disgruntled rugby fan on social media as Wales crashed out of the Commonwealth Games sevens tournament.

“Either take it seriously, become a professional outfit, appoint top coaches with access to the best available players, or forget it. It’s embarrassing to read about who we are losing to and how many,” added Mr Angry.

Pugh’s team defeated Malaysia 33-14 in the 9th-16th quarter-final match before narrowly losing 14-10 to England in the ninth-placed playoff match.

It seems that our angry Wales fan was unaware that Wales will no longer participate in the HSBC World Rugby Sevens Series next season.

World Rugby has decided to reduce the number of teams participating in the competition, which has led the home unions to agree for Wales, Scotland and England to compete as Great Britain in the men’s and women’s series.

Many casual rugby supporters failed to realise that Canada is ranked one place above Wales in this season’s series rankings in 14th, while England finished 8th  and Fiji 4th.

The likes of Kenya and Spain, not rugby powerhouses in 15-a-side, are emerging nations on the sevens circuit and ranked above Wales this season.

These results are a far cry from when Wales lifted the trophy to become World Cup Sevens champions in 2009.

The Welsh Rugby Union, RFU and Scottish Rugby have confirmed the three Unions will be joining together to form men’s and women’s Great Britain Sevens (GB) teams ahead of the 2023 HSBC World Rugby Sevens Series.

Many still believe that Wales were not given the credit they deserved for being crowned world champions in 2009. However, Pugh and his young charges will try to replicate the feat when they participate in this year’s World Cup next month in South Africa amid an uncertain backdrop.

“Obviously, it’s come out in the press that it’s going to GB now for next season, which is a bit disappointing as a lot of the boys will miss out,” said  Wales wing Lloyd Lewis who scored twice in the defeat against Fiji.

“We don’t really know what’s happening. It’s up in the air, but as a squad, we’re just focusing on this, finishing the World Series in LA in August and then the World Cup in September.”

“We’re just trying to enjoy our time in the jersey while we can. We’re a really close group, we really enjoy playing together, and it’s obviously a great privilege, so we’re just enjoying the opportunity to play together while we still can,” he added.

The Welsh Rugby Union decided to suspend the men’s Wales Sevens team in 2020 due to the implications of the worldwide Covid pandemic. Pugh was named head coach last autumn as Wales resumed playing duties on the sevens circuit.

However, it has now been confirmed that from next season Great Britain will take the one spot afforded to the home unions in the HSBC World Rugby Sevens Series.

Is this the last time we shall see the Scottish, Welsh and English Rugby Sevens sides in action? Will be Team GB 7s only in the HSBC World Series? #CommonwealthGames2022 #RugbySevens #rugby

It seems that World Rugby has decided to cut the number of teams participating in both the men’s and women’s World Rugby Sevens Series because of a lack of global appeal.

So, in short, World Rugby is looking to reduce costs and safeguard the status of Sevens as an Olympic Sport by having Team GB compete in the yearly series.

“Our view is we have a better chance of being competitive in the World Series as Team GB while still having a developmental Sevens programme and competing as Wales in the Commonwealth Games and World Cup. So that would seem to be the way forward, “confirmed Walker.

While it is understandable that a global business such as World Rugby will always look to become more cost-efficient, it comes at a time when rugby is at something of a crossroads.

In light of the legal cases brought against World Rugby, the RFU and WRU by former rugby players who have been after being diagnosed with early onset dementia, it may be that Sevens rugby has a massive role to play in the future of the game.

Brain injury campaign group Progressive Rugby has urged World Rugby to reduce the number of games each season to a maximum of 25 and only replace players due to injury during matches.

Other changes suggested by Progressive Rugby include a minimum 21-day ban after a head clash and a minimum eight-week protected annual rest.

The campaign group would also like to see no pads contact training be limited to 15-minutes per week. Failure to implement any of the new regulations would result in heavy fines for clubs and unions.

Starting from 10:30 BST, it's all about the men's semi-finals

All these suggested new regulations seem reasonably straightforward. However, they would need to be heavily policed, especially regarding the substation of players, to ensure players weren’t faking an injury to gain a tactical advantage.

It is paramount that World Rugby acts accordingly to safeguard the health of players in the short and long term.

However, it may come to a point where seven-a-side rugby has greater appeal to fans and players in terms of entertainment value and player safety.

Reports suggest that parents are becoming increasingly reluctant to let their children participate in rugby due to their genuine fears about the long-term damage it can do to their health.

You can hardly blame parents for not wanting their children to participate in a sport where concussion levels are high. However, with player participation down, it is a situation that World Rugby cannot afford to ignore.

Children play tag-rugby, a form of touch rugby that introduces them to the fun aspects of rugby like passing, running, and avoiding contact, which all require high energy levels, speed and agility.

It is no surprise that countries like America, for example, excel in the World Rugby Sevens Series due to its fast-paced nature and less complex rules.

Argentina is currently above New Zealand in the series rankings this season, while Kenya and Spain are embracing sevens rugby.

You can’t help but feel that Wales dropping out of the elite tournament series comes at a time when sevens could soon take centre stage.

Morgan Williams scores two tries for @TeamWales but England hold on to win 14-10 in Coventry in a highly entertaining encounter 👏#CommonwealthGames22 pic.twitter.com/aRGdvpT0xM

The WRU’s Walker says they are trying to find a suitable sevens series completion in which Wales can compete next season to help their development programme for players and coaches.

Some argue that a decade of underfunding in the sevens game has led us to this situation.

The real fear is that Team GB will mostly be made up of English players with a sprinkling of Welsh and Scots players, which offers fewer chances for players to regularly play on the big stage.

Sevens has been an excellent stepping-stone for 15-a-side  Wales and British Lions internationals such as Lee Byrne, James Hook, Andy Powell, Justin Tipuric, and  Alex Cuthbert to develop their skills on the international stage.

There is a sense that this opportunity won’t be presented similarly to up-and-coming Wales rugby players.

The fear is that the switch to Team GB instead of competing as individual nations in the World Rugby Sevens Series will lead to Wales losing its identity as a rugby stronghold at a time when the rugby landscape is changing.

When asked if there was remotely any chance of a switch to Team GB status in the 15-a-side format of the game, WRU PD Walker emphatically said: “Absolutely not, and I can say that without fear of contradiction.”

That’s a pretty bold prediction from Walker when you consider many envisage that the game of rugby will never be the same again as it has to face the implications legal actions will no doubt force upon it.

And as rank outsiders Wales proved in Dubai in 2009, anything can happen, and it’s never wise to bet on rugby.