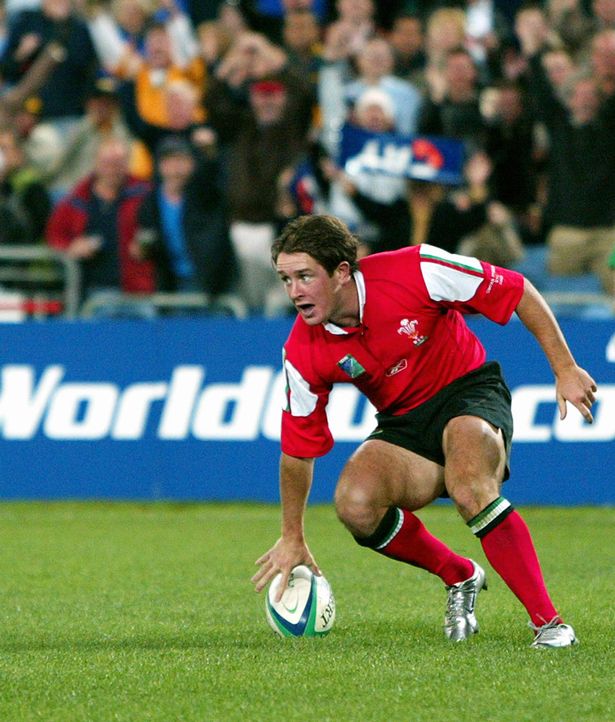 Shane Williams scores against the All Blacks. Pic: Getty Images.

It was the game that rescued the career of Shane Williams – Wales v New Zealand in the pool stages of the 2003 World Cup. Before the tournament, it looked as if the player who would go on to become Wales’ greatest try-scorer might not even make the plane. He did – just – as a utility third scrum-half and back-up wing.

Tonight, 17 years on, the game is being replayed and re-assessed on S4C where Williams watches the 53-37 defeat for the first time since that day in Sydney . . .

Before the 2003 RWC, I was out of the Wales squad. Steve Hansen wanted boys who were a bit bigger than me in the squad. So I was out of the squad for about a year, but then I started playing well again for Neath, so Steve decided to take me to the World Cup as a scrum-half.

I’d been waiting for a chance to play in a game like this, I’d been selected, and then I fell ill. So all week, I hadn’t trained, hadn’t seen anyone, I was in quarantine.

Dan King would come and slide a pizza under the door for me, and that was the only time I’d speak to anyone. I lost around a stone that week, but I wanted to play in that game so much.

I really thought that unless I played against New Zealand, and played well, that I would never play for Wales again.

At the time, I thought this game was the most important in my life. It was a make or break game for a lot of the boys, as they hadn’t played much in the first three games.

Jonathan Thomas was one of them, and fair play he was immense in this game, and he was picked for the quarter final against England after this game.

I’ve seen highlights, but I’ve never watched this game back.

I don’t think the haka is scary, but it lets you know that you’re in for a big game. I really enjoy it. To be stood there, watching it, I couldn’t wait for the game to start. New Zealand were the favourites to win the World Cup.

New Zealand scored the first try after two minutes, and there wasn’t much we could do about it. They recycled the ball so quickly.

They have the skills and they would switch the ball from one wing to the other, and suck the defenders in. Muliaina’s pass in that first try to Joe Rokocoko on the wing, easy – no one touched him.

Joe Rokocoko was a class apart. Definitely one of the best wingers I’ve played against. He was so quick, strong and he could step off both feet. And he was unbelievable in this match.

For the second try, he just ran outside Colin Charvis and he was no slouch.

Watching this game now, after seeing New Zealand score a fourth on 29 minutes, and I haven’t seen a team play with these skills and tempo in a long time.

They don’t make mistakes either and that’s such a hard thing to do. I remember, I couldn’t wait till half time because I was knackered.

There wasn’t much structure to my game, I just wanted the ball in my hands, but that’s not something you get much of against the All Blacks.

So, I started standing at fly-half position to wait for the ball, and thankfully it came to me. Tom Shanklin played a big role, too, and he was everywhere in this game.

If New Zealand go two tries up you’re in trouble. It forces you to try and play at that same tempo and move their big boys around the pitch.

But if you had the fitness, you knew that you could do that, and after training in the sun in Lanzarote, I knew I was fit. And we had fun out there too.

There were plenty of Aussies in the crowd and they didn’t want New Zealand to win the game, so there was lot of support for Wales on the day.

At half time, I was in the toilet for around 10 minutes I think, I was still ill. I was knackered.

Steve was happy with the way we’d kept ourselves in the game. With the ball in hand, we were playing great.

That pass from Gareth Thomas (for Wales’ fourth try, scored by Shane) was perfect. If Carlos Spencer caught that, he was scoring at the other end of the pitch.

Alfie still talks about it now. That put Wales in the lead for the first time and we were quite nervous after that, because you knew that New Zealand would come back.

I felt very proud. No-one gave us much of a chance against New Zealand. We played very well and put in a huge effort, but I can see why New Zealand won the game, because they were class.

They had everything. It was a special game to be a part of.

I still believe if I hadn’t played in that game, I would never have played for Wales again.

That game changed everything for me. And it gave us so much confidence for the England game in the quarter finals.

We believed that we were good enough to win that game – we should have won that game. We weren’t disappointed at all against New Zealand, but we were after the final whistle against England.

English subtitles available. The programme will also be available to watch on demand on S4C Clic and iPlayer.