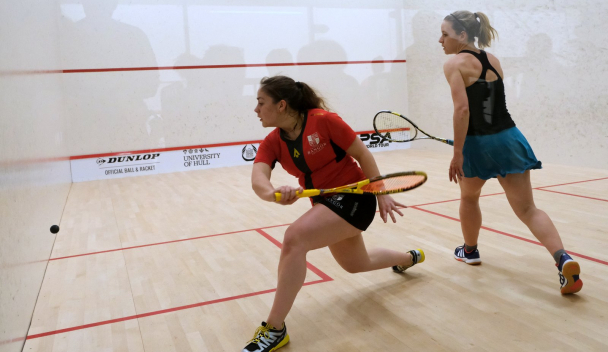 Tesni Evans was pushed all the way before booking third round spot in Hull.

Tesni Evans had to stage a fightback to book her place in the third round of the British Open after a gruelling five game battle in Hull.

The No 9 seed took the first game 11-6 against England’s Julianne Courtice who she had beaten on her way to defending her British National title in February.

But any thought this would be a comfortable passage against her unseeded rival were ended as Courtice – ranked 27 places below Evans at 36 in the world rankings – took the next two 11-7, 11-7.

But Evans responded to win the next 11-7 and then claimed the decider 12-10 to finally progress after a 64 minute battle.

“I started off quite well, I wished I had kept playing as well throughout the match, but then she got into it,” said 26-year-old Evans.

“She has been playing very well for a couple of weeks, and we have had same pretty tough matches in the past.

“I was happy with the way I dug it out in the fifth game, it’s anybody’s match at that point. I think the game plan was good, I just didn’t execute it well enough.

“You know you need to be accurate when you play Jules, it needs to be glued to the side wall, and that adds pressure on you before you go on. And I guess I could have made it easy for myself, but then again, I never do!

“I am also happy with the way I left everything out on court.”

Evans, who had a first round bye, will face France’s Camille Serme for a place in the quarter-finals.

The duo last met at the El Gouda International in Egypt when the world No 4 – also seeded four for the $162,000 tournament in Hull – won in straight games.

“I need to have a good recovery as it’s going to be very physical, she gets to the ball early, but I know what I need to do, and I’m looking forward to be back on the glass court,” added Evans, whose game against Courtice was on a side court.

But there will be no third round spot for Haverfordwest-born Makin after he bowed out to world No 6 Paul Coll after an 87-minute marathon on the glass courts.

The first game alone took 32 minutes but Coll hit back to take the next two 11-8, 11-9 before stepping it up in the fourth to win 11-4 and finally see off the challenge of Makin who has risen up the world rankings to a career high 12.

“I have massive respect for Joel,” said Coll.

“He is such a hard trainer, when he chewed me up four years ago at the Aussie Open I knew he was going to keep rising. The work he has put in is credit to where he is this season and I have massive respect for him.”