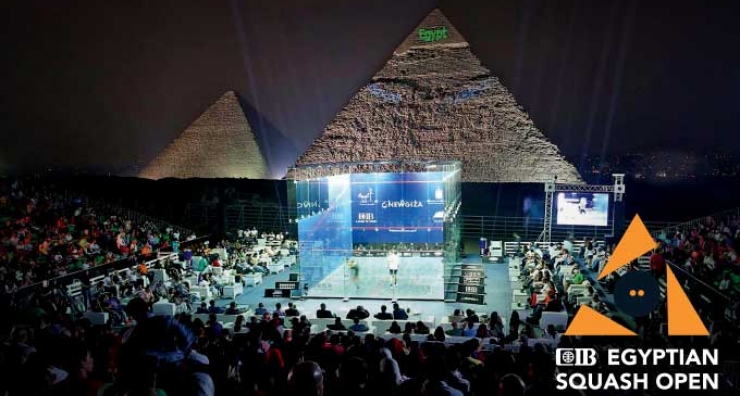 The scene at the VCIB Egyptian Open.

Makin, who was born in Haverfordwest and grew up in Aberdare, dumped World number three Tarek Momen out of the CIB Egyptian Squash Open.

While Makin was making his mark in Egypt, fellow Welshman Devred, a 21-year-old who learned his early squash at Cardiff SRC, won the $6,000 Men’s Internazionali D’Italia tournament in Italy.

It was a magnificent squash double for Wales in countries 2,500 kilometres apart.

Devred, who plays for Welsh Wizards in the Premier Squash League, lifted the trophy by beating Austria’s Aqeel Rehman 12-10 in the fifth to complete a cull of three of the top four seeds.

Fellow Welshman Makin, the 25-year-old World number 12, caused a major upset when he defeated Momen in the second round of the Egyptian Open.

The man from Pembrokeshire rallied consistently and his accurate shots frustrated his Egyptian opponent. Makin emerged the winner 11-8, 9-11, 12-10, 11-9 victory in 68 minutes.

“That was massive for me,” said the Welsh number one. “I have had two tight losses to him recently.

“He played well, is tricky and moves the ball quickly around the court. He is in really consistent form hasn’t really lost to anybody lower down for a while, so that was really big for me.

“The last few times we have played, maybe I was a bit too passive. I was aware of his attacking options and I just had to go for it a little bit more and attack a bit earlier and not be so afraid of his counters. That paid off.

“I don’t want to come in and lose what is my first match in this tournament. I didn’t feel I was too far off going into it and had a bit of belief. I just had to change a few smaller things and that made a difference, so I was really happy.”

Makin went on to qualify for his first PSA World Tour Platinum semi-final after beating France’s World number 59 Baptiste Masotti in front of the Great Pyramid of Giza in Egypt.

The Welshman then lost in the semi-final against Egypt’s former World number one Karim Abdel Gawad.

Makin and Masotti had never played each other before, but Masotti had beaten World number nine Miguel Rodriguez at his first Platinum event. It was Makin won won 11-3, 12-14, 11-8, 11-2 in just under an hour.

“Baptiste was attacking freely, going in short and the ball was quite dead,” said Makin.

“The third was crucial. I had to get the length across his backhand and once I did that it took the middle away and I had a few more chances.

“It was about lengthening the rallies out at times, but it was also about setting a pace and getting across the middle to force him back. I was really pleased to pull away in the end.

“It’s my first semi-final in a Platinum tournament and I had only played one quarter-final before, so it was massive for me.”

“Joel is one of the players who has come up really quick,” said Gawad. “I remember watching him in Qatar three or four years ago and suddenly he is in the top 15 in the world and beating all the top players.

“Last time we played he had to retire through injury and I was 2-0 down. I knew it was going to be a tough match.”

“Playing Ali is always tough for me – he is World number one,” said Gawad.

“He’s always been my competitor since we were seven years old.”

Welsh Wizards are at home to Coolshurst in tyhe Premier Squash League on Tuesday (7.20pm). The match is at the Sport Wales National Centre.

Wizards have nine male players, including three Egyptians, plus players from Spain, Wales and England.

The six women players signed by Wizards include players from India, the Netherlands, Czech Republic, England and Wales.

The format is three men and two women. Tickets for Welsh Wizards next two home fixtures: