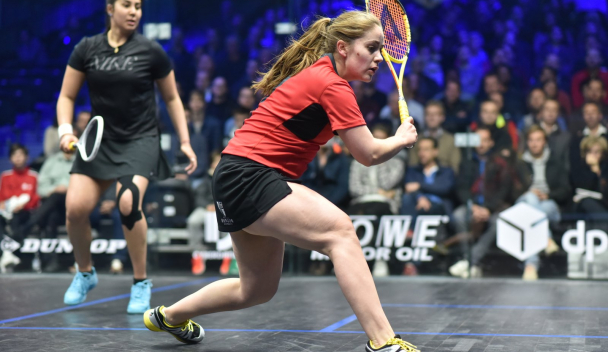 Tesni Evans was taken to five sets in Holland.

Tesni Evans will face reigning World Champion Nour El Sherbini as she bids for a place in the semi-finals of the DPD Open in Holland.

The 26-year-old admitted she had to dig deep to see off Mariam Metwally to set up the quarter-final clash in Eindhoven.

The Rhyl-based World No 9 has also been taken to a decider when she last faced Metwally at the BlackBall Open in Cairo last month.

“That was a really big match for me in many ways,” said Evans after her second round victory in the $106,000 tournament.

“I’m really happy that I dug in and showed some grit and determination, which I think in the end that is what it came down to.

“The last few weeks I haven’t felt myself on court and my main strength is my grit and I didn’t have it.

“That’s really hard to take when you come off court and you haven’t given it everything, so it was a really big match in so many ways.”

Evans, seeded eight for the event at the DPD Hub, will face the second seed on Friday night.

Joel Makin’s Dutch adventure came to an end but only after he put up a five game battle against No 8 seed Marwan Elshorbagy, who plays for Welsh Wizards.

“Joel has been playing at a top ten level,” said 25-year-old Marwan, who faces his brother and No 2 seed Mohamed in the quarter-finals.

“He has beaten the World No.1, he has beaten a few players inside the top ten so I knew that this match was probably going to be the toughest match I could have got.