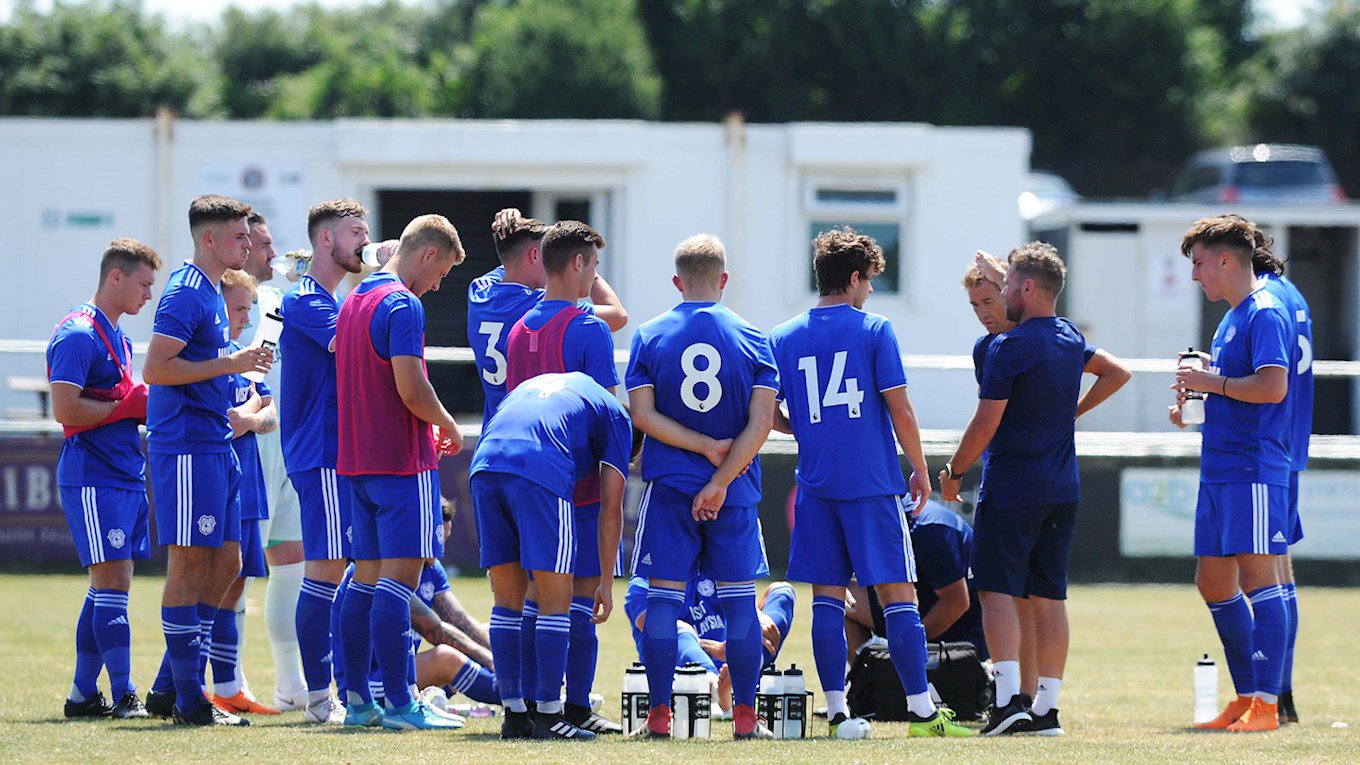 Coaches Jarred Harvey and Andy Legg chat to Bluebirds' under-23 players during their week-long tour to the South West. Pic: Cardiff City.

Dai Sport are spending the week in Cornwall and Devon with Neil Warnock’s Cardiff City. Here is the fourth part of our Devon and Cornwall pre-season diary. Watch out for part five tomorrow.

Cardiff City agreed to play Porthleven during their pre-season trip after the Cornish club sent an invitation to manager Neil Warnock.

The fixture is being played at Gala Parc this evening (Thursday) when the development squad play the third match of their trip to the South West.

“I know Neil from my Bodmin days and I felt we might just get him to visit our neck of the woods.

“His clubs play a lot in Cornwall and we are delighted he has accepted.

“It’s a fantastic occasion for us, bringing a Premier League team to Gala Parc. Cardiff City are playing Porthleven FC and that sounds great.”

The Bluebirds under-23 team are in Porthleven, the fishing town originally designated a harbour of refuge because the seas nearby were a black spot for wrecks.

The population is around 3,000 and their football club is nicknamed the Fishermen.

Senior players Lee Tomlin, Anthony Pilkington and goalkeeper Lee Camp are all set to play for Cardiff against Porthleven tonight.

All the players were at Liskeard FC’s Lux Park stadium for an hour-long session. The players who had been in action at Bodmin had a gentle outing, while there was plenty of running for the rest.

Aron Gunnarsson and Kenneth Zohore were among those who were tested by Neil Warnock’s coaching staff.

Manager Neil Warnock and a number of players then took part in a media day for television, radio, websites and newspapers.

Warnock was in demand, while Joe Ralls, Sean Morrison, Josh Murphy and Jazz Richards were among others who chatted to the press.

The noise from seagulls circling overhead and aircraft flying out of Newquay disrupted television interviews once or twice, but Warnock spent an hour talking to various media outlets.

Cardiff are staying at the St Mellion International Resort on their trip to Cornwall and Devon. The Jack Nicklaus Signature Course is a big draw at the prestigious golf venue and a number of players were out playing this afternoon.

Bluebirds manager Neil Warnock insists he has one of the best teams at Premier League level – and says he could not wish for better.

Warnock has heaped plenty of praise on his players, but this time he was talking about his football backroom staff.

“I couldn’t wish for better,” says Warnock. “Cardiff City fans have a team to be proud of, while I have the most amazing group supporting me off the pitch.”

Carl Serrant led training at Liskeard on Thursday morning. He joined the Bluebirds a year ago, having worked with Warnock at previous clubs.

Striker Omar Bogle and midfield player Stuart O’Keefe are both still with Cardiff City, but they haven’t been involved during the pre-season trip to Cornwall and Devon.

Lee Tomlin, Anthony Pilkington and goalkeeper Lee Camp have been working with the under-23 team and scouts from other clubs have been to Cardiff matches checking on their form.

All three are likely to play for City again at Porthleven this evening, but Bogle and O’Keefe appear to be out of the picture.

Former Peterborough player Bogle, 25, still has two years left on his contract, while 27-year-old O’Keefe’s deal runs until next summer.

Neil Warnock has revealed he will include first team players in Cardiff’s under-23 team playing Liskeard at Lux Park on Saturday.

Who plays at Liskeard depends on the line-up Warnock selects against Torquay United at Plainmoor on Friday, but goalkeeper Brian Murphy, Kadeem Harris and defender Matt Connolly may all be given some extra playing time.