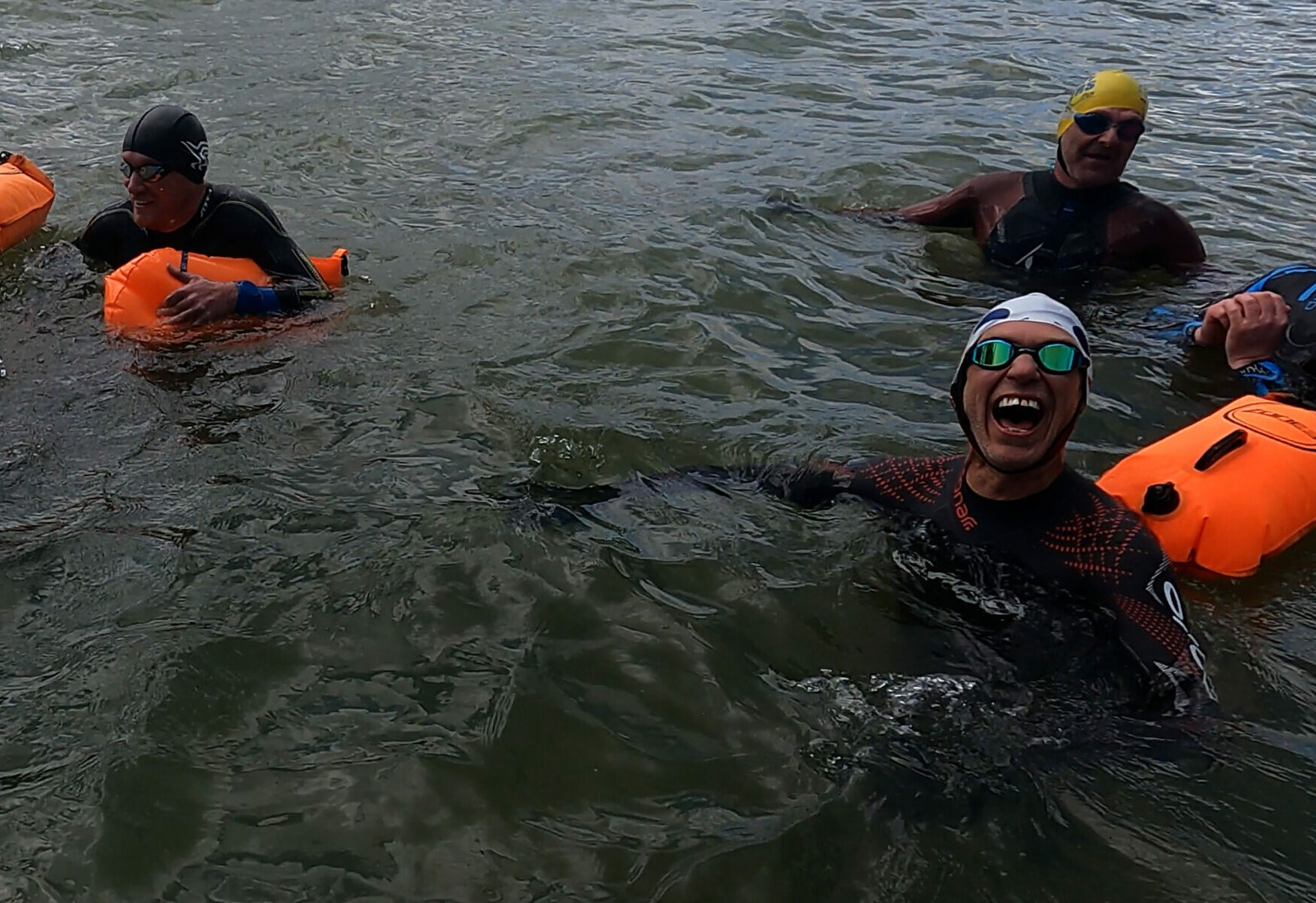 The benefits – both physical and mental – of open water swimming have been known to enthusiasts for years. But now a niche activity is becoming more mainstream there are new issues to overcome. Where can we all swim and how safe will it be? Alex Bywater hears how Swim Wales and Welsh Triathlon have joined forces to meet that challenge.

Until recently, open water swimmers – including triathletes – had to give places like Llandegfedd Reservoir a wide berth.

The water may have looked welcoming, the scenery maybe more so, but officialdom was not.

Swimming was prohibited and perhaps with good reason since reservoirs with their deep waters, steep sides, narrow banks and hidden underwater machinery were often not safe places to take a dip, far less to race in.

But the rapid growth in the numbers of open water swimmers throughout the UK forced the water companies into a re-think. Attempts to allow a regulated amount of swimming have been undertaken and in Wales that has led to the SAFE Cymru programme – an accreditation plan worked out by Swim Wales and Welsh Triathlon, in partnership with Welsh Water.

It’s May but there was still a collective sharp intake of breath as swimmers of Caerphilly Triathlon Club, plunged into the freezing cold waters this week.

The men and women brave enough to jump into the reservoir near Cwmbran admit starting is the worst part of open water swimming.

But with a wetsuit to help keep you warm – an essential item for any swimmer in such conditions – the physical and mental benefits of doing so can be nothing short of extraordinary.

After more than a year of lockdown – a time in which public swimming pools and gyms have been closed for long periods – there has been a 45 per cent increase across the United Kingdom in those taking part in open water swimming.

Welsh Swimming’s governing body, Swim Wales, report a large majority of the UK-wide increase has come from Wales with its gorgeous coastline and lakes perfect for those new to the sport.

Details from Swim Wales reveal female participation in open water swimming has risen from 50 per cent in 2017 to 65 per cent in 2020.

Overall, 30.9 per cent of women and 32.8 per cent of men take part in open water swimming for their health and wellbeing. These are remarkable numbers which only look like increasing.

During the Covid-19 pandemic, cold-water swimming has become an increasingly popular way to ‘wake up’ the body not only in Wales and the UK, but worldwide. Indeed, such is its popularity that popular wetsuit manufacturers in the USA have been struggling supply the demand for products.

As we come to the end of mental health awareness week, it is worth a reminder that scientific evidence has proved open water swimming can benefit the mind.

Such evidence can be dated back to a 2018 case study of a woman (aged 24 at the time) who had suffered with severe depression from the age of 17.

When the woman tried open water swimming, the study found the cold water “led to an immediate improvement in mood following each swim and a sustained and gradual reduction in symptoms of depression, and consequently a reduction in, and then cessation of, medication.”

The study also found that regular cold-water swimming results in a ‘post-swim ‘high’ triggered by the release of beta-endorphins in the body.

No wonder then that so many people have taken the plunge.

Anna Markall from Caerphilly Triathlon Club was one of those brave enough to test the water at Llandegfedd on Monday. “I do sea swimming as part of my triathlon training. I’ve never swam in a reservoir before, but it was nice to get in there,” she said. “It was freezing!

“I’ve swum in open water for three or four years. It’s been something different and a challenge because swimming hasn’t come easily to me. I’ve had to work at it and still struggle sometimes.

“But I’m 50 this year so it’s been nice to do something new which gives you a good sense of wellbeing. I’ve met lots of new people and there is a sense of community which is great.”

Alex Burridge, 33, from Cardiff, added: “I have been open water swimming for a year now on and off. It’s not been long. Covid-19 has had its impact on people getting out and going swimming.

“It’s a great way to enjoy the water. I prefer salt water personally, but there is nothing like open water to reinvigorate the soul. It’s been great for me to get out in the open water.

“The physical and mental health benefits are huge.”

Open water swimming is a must for triathletes, but it is not something limited to just elite athletes. The beauty of being at one with nature in either the sea, a lake, a reservoir or a river is there is no pool fee. There is also a real sense of community and togetherness among wild swimmers.

Groups have sprung up all over Wales and include the Chicken Dippers and the Bluetits to name just two who both swim in the bays of Langland and Caswell near Swansea.

Hope Filby of Swim Wales said: “What’s lovely is we are starting to see people who might not have accessed aquatic sports in the past now coming together as groups and communities and going for a swim.

“Some might only go up to their ankles or knees and some might swim, but it’s the feel of the water and the environment they are in that’s very attractive.

“We are seeing a huge benefit in terms of both health and mental well-being. That’s really important as we celebrate mental health awareness week. The environment is different every time you go in the water. It’s never the same.

“In Wales you can be swimming in a lake one day and the next you can choose to be swimming in coastal water. The element of surprise and difference is what makes it so exciting.”

Many of the men and women attracted to open water swimming are daredevils at heart, but the huge surge in its popularity has meant Swim Wales and Welsh Triathlon have joined forces to form the accreditation process – SAFE Cymru – to ensure participants are looked after at all times.

Filby explained: “Swim Wales and Welsh Triathlon got together and looked at the increase in people taking part in open water swimming across Wales.

“What we noticed was that people were accessing facilities, but they didn’t necessarily have the appropriate measures in place to make sure swimmers were safe.

“So, we have created an accreditation called SAFE Cymru and worked with a variety of different facilities across Wales to put those measures in place.

“That includes risk assessments, emergency action plans, and so on. There is also a facility inspection and an accreditation to outline they are safe to allow people to come for open water swimming.

“Llandegfedd is the first facility in Wales to get that accreditation. What we are hoping to do is roll this programme out to the other lakes and reservoirs operated by Welsh Water and other manned facilities as well.

“Once we have accredited the manned facilities, we will then start exploring the unmanned facilities and start with partners and landowners to see if they have measures in place.

“We just want to make sure people know how to be safe.”

Alun Shurmer of Welsh Water added: “We have seen a huge increase in the number of people in this sport over the last few years.

“Historically, we haven’t been able to allow open access to our reservoirs because there are dangers involved.

“But if it’s done in a controlled fashion, with the right safety, we can now offer sessions for people to come to places like Llandegfedd and make the most of these fantastic expanses of water.

“We did a pilot last year and had about 700 people participate in the course of a few months. We could test and see whether or not it was going to work with an accreditation process.

“The interest has been phenomenal. People have been staying at home and not going abroad for their holidays.

“They have been looking for other things to do, but if you’re going to do open water swimming then you should do it safely and the best way is through an accredited facility. Then you’ll have the safe knowledge you’ve got life guards around you and everything is in place.”

Swimming, whether wild, in the sea, or in a pool, can, of course have its dangers which is why the open water accreditation process – Safe Aquatic Facility Endorsement (SAFE) – has been created.

It is a smart, savvy ploy which should see a sport which is already booming improve still further in terms of popularity.

Official statistics show one in four people have suffered or are suffering with mental health problems and treatment for those problems costs the Welsh Government an estimated £7.2 billion each year.

Increasingly, those who take to the open water are finding their issues can often be simply, and quite literally, washed away by a quick dip.

Welsh Triathlon chief executive Beverley Lewis said: “Open water swimming is very sociable. That’s why groups like the Bluetits are out there and thriving.

“They enjoy the social side and there is a community feel. This could be a parkrun-style moment where people try activities and sports they might not have thought of before. That would be a lovely aspiration.

“We hope it could lead to more people coming into triathlon as well.

“Swimming in a lake is something very different and very wonderful.”

We’d love to know what you think about outdoor swimming: how does it make you feel, why do you do it, how does it impact your life? Your answers will be anonymised & used to help Swim Wales & the team at @outdoor_swimmer

As we head into the height of summer and coastal and inland waters heat up, it is expected even more people will opt for a swim.

As Covid-19 continues to limit foreign travel, staycations in Wales are set to boom with bookings in places like Pembrokeshire already incredibly popular.

“I started in the open water because I enjoyed swimming when I went to west Wales,” said Mr Burridge.

“For me, getting outdoors is a big thing and it helps me encourage my kids to come down to the beach!

“I can sneak in half an hour of swimming when they’re having fun at the beach and that benefits everyone. I definitely think the accreditation process is a good idea.

“Any sort of certification in terms of safety is key. There is no chance I’d do it on my own. I always swim with others who are capable or if there are lifeguards.