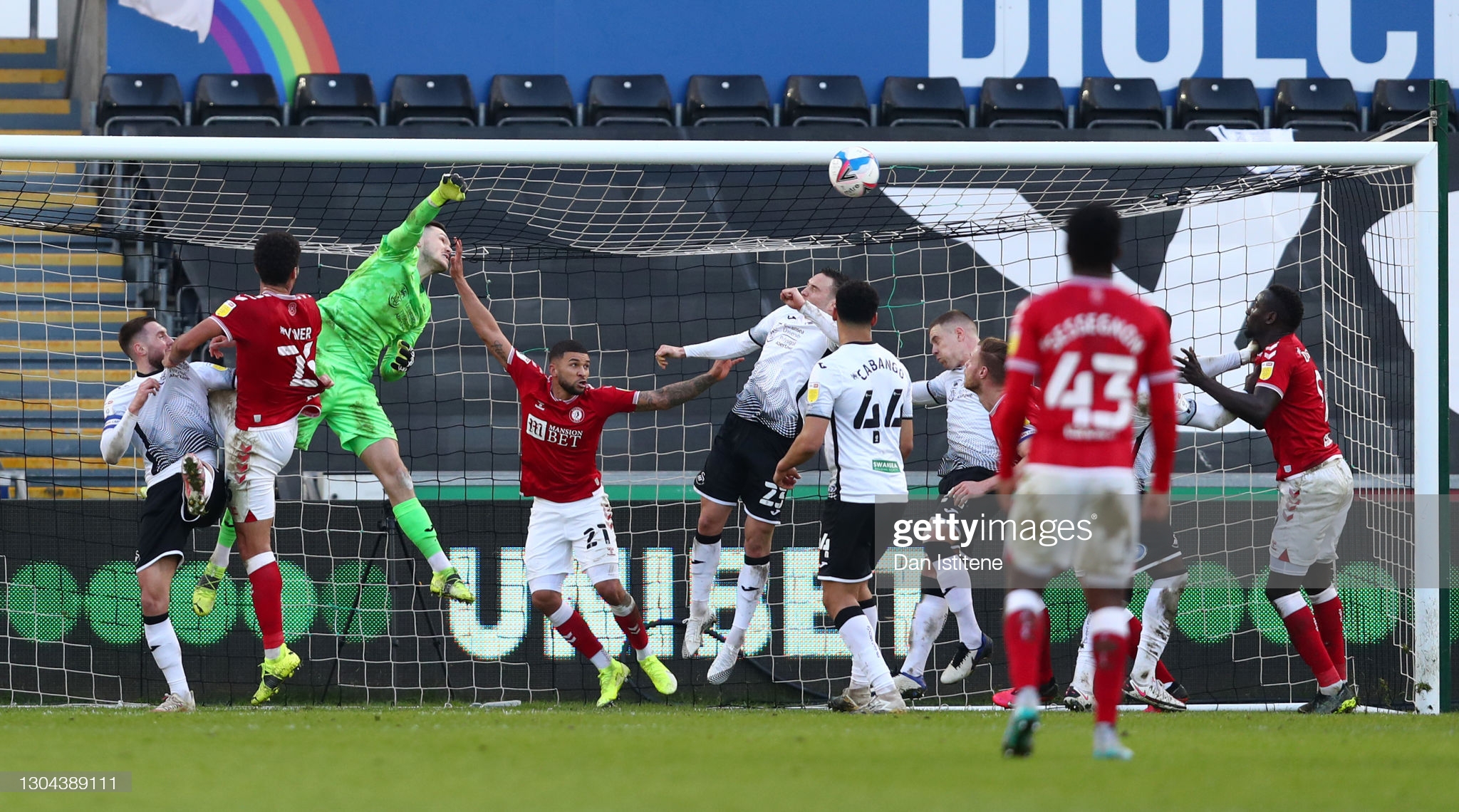 Steve Cooper admitted Freddie Woodman had made two mistakes in Swansea City’s 3-1 home defeat to Bristol City – but reckoned the points should have been in his team’s grasp by half-time.

Goalkeeper Woodman was at fault when a corner kick from former Swansea loan player Kasey Palmer flew over his head and directly onto the far corner of the net to give the Robins a 2-1 lead.

The keeper then saw his clearance charged down in stoppage time for Antoine Semenyo to clinch a first win in the first game in charge for new Bristol City manager Nigel Pearson.

It was the Swans’ second defeat in two matches and puts pressure on them to win their two games in hand if they are to keep pace with Norwich City and Brentford in the automatic promotion places.

“Freddie’s made a couple of mistakes for the second and third goals, we know that, but he’s been brilliant for us since he’s come through the door,” said Cooper.

“Certainly, the first half, I thought the game should have been done and dusted, two or three goals at least. We didn’t take our chances but still managed to start the second half just as well.

“We had complete dominance of the game; it was a completely one-sided affair. We went 1-0 up and we didn’t manage going 1-0 up very well, something we’ve done really well this year so that was unlike us,

Pearson hailed Bristol City’s fighting spirit after they came from after Palmer came back to haunt his old side after handling in the box to gift the dominant hosts a second-half penalty.

Andre Ayew found the bottom corner for his 10th of the season, but it all unravelled thereafter for  Cooper’s side.

Palmer then put the Robins ahead when his corner looped over the head of Woodman and found the top corner.

Woodman was at fault again for the third when he was closed down by Semenyo, who blocked his clearance and tapped the ball in, as  Swansea slipped to their first home league defeat since October.

“Swansea were by far the better side,” said Pearson. “They dominated possession and our quality on the ball was poor. We had to work so hard out of possession, and it was a relentless task just to stay in the game.

“But I have to give the players an unbelievable amount of credit. They stuck to their task and put their bodies on their line.

“Let’s not kid ourselves, we were second best. I couldn’t have had any complaints if we had come in 2-0 or 3-0 down. But that just shows what football is like.

“We felt it was important to change the shape to a 4-5-1 and it allowed us to press them higher up the pitch.

“I’ve inherited a talented group of young players, but with a team ethic that shines through. My mission is to bring positivity and make sure we’re in a positive place at the end of the season.”