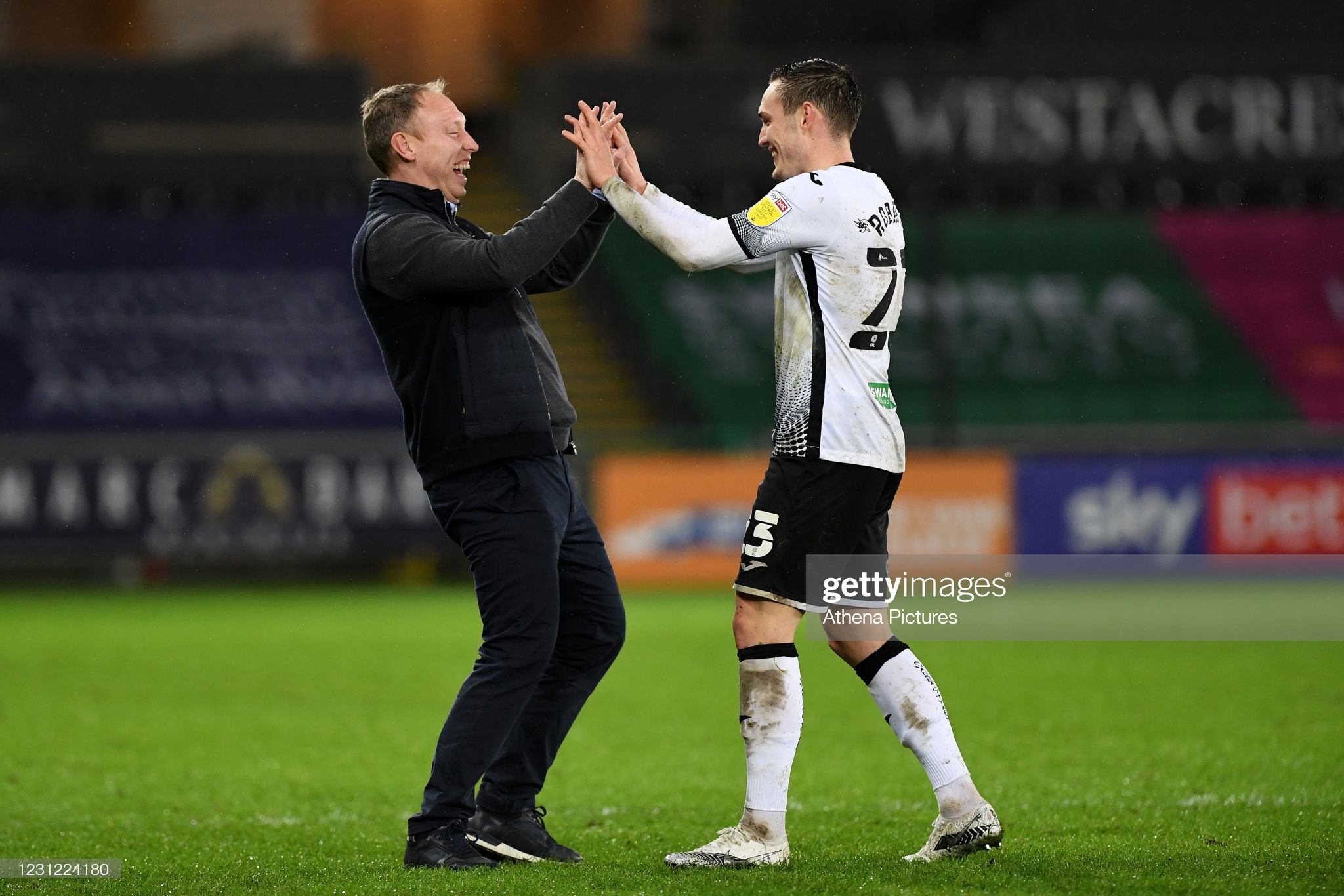 Steve Cooper paid tribute to his Swansea City side’s staying power – and the desire and athleticism of Connor Roberts – after they snatched a dramatic victory over Nottingham Forest.

The Swans coach admitted his promotion chasers had stolen the points after a match that looked destined to end as a fortunate draw for the hosts.

But Roberts struck with a magnificent header in the 87th minute to snatch a 1-0 victory that lifted the hosts to third in the table. They are a point behind Brentford and five behind Norwich City, but they have two games in hand.

It was Swansea’s eighth win in their last 10 Championship matches, an unbeaten run that now stretches back to mid-December.

It was also their 16th clean sheet of the campaign, although Forest will wonder how they failed to score, such was their dominance.

“It was not a great game, and there was not much in between the teams in terms of chances,” said Cooper.

“I can’t think of Freddie (Woodman) making too many really difficult saves.

“I’m not going to sit here and say we were brilliant in the game, because in parts of the performance we weren’t, especially with the ball. At times we struggled to get our positioning right on the pitch and play with enough rhythm and intensity, especially in the first half.

“I just thought the game was heading towards a 0-0 draw. Forest are a really good team in good form. They’ve got loads of experienced and talented players.

“But we just felt, in the second half, we had to make some tactical changes, get some more attacking players on and get some width and hope things would turn a little bit, and it didn’t really.

“But in the end, we managed to create a good moment to go and win the game. I’m delighted with the win and knowing that we will need to play better in the next game.”

Roberts’ goal was his third of the season and reminiscent of his header in the victory away to Forest earlier in the season.

It displayed all the energy, determination and athleticism the Wales defender possesses and earned him the approval of Cooper.

“It was a great cross and a great header, but just look at the desire from both of them to get there,” added Cooper.

“That just sums up the athleticism and desire of Connor, but also of Jake to make things happen.

“The dressing room afterwards was buzzing. It’s as loud as it’s been because they probably agree with everything I’m saying. Let them enjoy it.”

“The performance shows as a team we are getting closer, but if you look at the last two games, we’ve had one draw and lost the other. That’s the difference between us and Swansea.

“I’m sure they would admit we were the better side and they did not play as well as they could, but they came away with the three points. We need to be more clinical.

“It’s about us working as hard as we can. Even though I thought we were the better side we still had to protect our position and we can’t allow that lapse of concentration. The players all know it’s a game we should have not only not lost, but won.”

Forest were the dominant force in the opening half, but rarely sustained their attacking threats sufficiently to test Freddie Woodman in the Swansea goal.

Connor Roberts has been a revelation for Swansea this season 🙌

From right wing back:

Filip Krovinovic looked as if he had prised open Swansea’s defence early on, but when an accurate pass would have played in Lewis Grabban, the Croatian over-hit his service.

For a side that had enjoyed an unexpected break when their weekend fixture at Sheffield Wednesday was postponed due to the weather, Swansea appeared lethargic and were frequently beaten to the punch by their more energized opponents.

In fact, Jake Bidwell was late enough with his sliding challenge on James Garner that the Forest management agitated for a red card. Referee Geoff Eltringham, however, opted for only a stern word and did not even brandish a yellow.

For all their control, the closest Forest came to scoring was with the last move of the half when a short corner move ended with Anthony Knockaert curling a shot from the right that clipped the bar with Woodman beaten.

It was Knockaert who then almost scored again straight after the interval, but his header from Krovinovic’s cross flew just wide.

Swansea’s threat hardly registered, apart from a couple of surging runs down the right from Connor Roberts , but the strike pairing of Andre Ayew and Jamal Lowe were almost anonymous.

Grabban flashed a shot across Swansea’s goalmouth just before the hour mark and when the striker made way for the veteran Glenn Murray with 15 minutes to go, the former Brighton man forced a superb point-blank save from Woodman.

Garner then curled a shot just wide before Swansea finally snapped into action with devastating effect late on.

Ayew and Conor Hourihane worked hard to drag Forest’s defence towards the touchline before Bidwell struck a magnificent cross from the left.

The onrushing Roberts timed his run and leap to perfection to plant an unstoppable header past Brice Samba in the Forest goal.