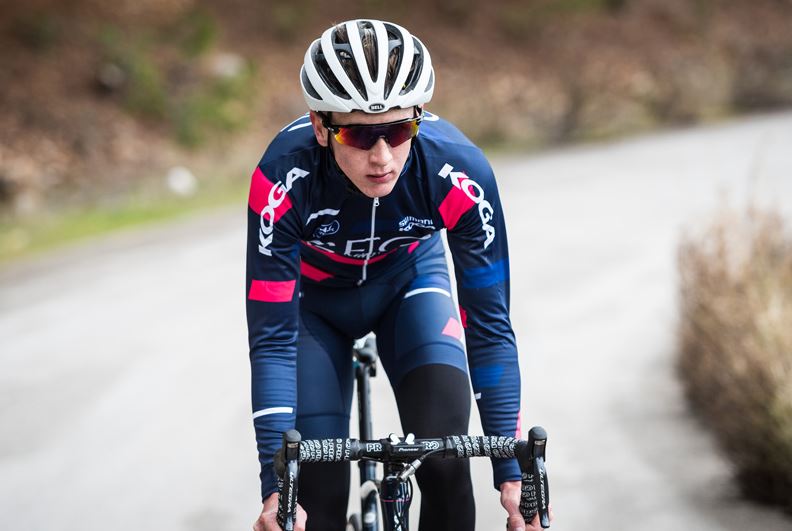 Stevie Williams may be one of the hottest young properties in British road racing, but the Aberystwyth rider will just be glad to be back in the saddle when he lines up for his new team in the Tour of the Basque Country this week.

The six-day, 784km ‘Itzulia 2019’ will be Williams’ debut ride for the world tour series Team Bahrain-Merida, but it hasn’t been an easy run to getting to the start line of a race that was won by Slovenian star Primoz Roglic in 2018, with former Team Sky rider Mikel Landa second.

A nagging knee injury forced Williams to spend five months fighting back to fitness and now he is ready to test himself in the top tier of cycling.

“Finally, the time has come to pin a number on again when I begin at Itzulia Basque Country,” said Williams.

“It’s been a long and frustrating five months of rehab and I couldn’t have done it without the help of Bahrain-Merida, Sport Wales, Physiohaüs and the staff at Manchester City.”

The 23-year-old Welshman will join forces with Grega Bole, Rohan Dennis, Dylan Teuns, Mark Padun, Luka Pibernik and Meiyin Wang in the Bahrain-Merida team when the race opens on Monday in Zumarraga.

Having missed his new team’s training camp on the Costa Daurada, near Barcelona, while he was having treatment back in Aberystwyth it will be a special moment for him to join forces in a race.

“When you’re new to a professional team the first thing you want to do is get out on your bike and work as hard as you can to make the first season as good as possible. I couldn’t do that for quite a while,” said Williams.

➡️ #MarkPadun and @stevierhys_96 return to race after long absence due to injuries. #BAHRAINMERIDA🇧🇭 SD #Štangelj: “We all believe that they will show their uprising shape. They will use this stage race to have an optimal and smooth plug-in back into the competition” pic.twitter.com/XumRZfvlZz

“The hardest part was keeping my head in a good place, trusting in the right people and having faith that it was going to get better.”

It all started for Williams when he joined Ystwyth Cycling Club seven years ago having turned his back on running and football.

Since then he has made a pretty rapid rise up the rankings. He progressed to the domestic pro ranks with JLT Condor and then the Dutch Continental team, SEG Racing Academy.

“I was on the Welsh cycling talent programme for four years and that was really beneficial for me. But joining JLT and then SEG was definitely a game changer for me,” added Williams.

“Once I’d raced in the UK for a couple of years I knew I wanted to get abroad and do some under 23 stage races in the mountains. That suited my riding style and I was luckily given that opportunity and made it count.”

He managed second place at the hilly 2017 Flèche Ardennaise and last year he won two mountainous stages on his way to victory at the Ronde de I’Isard. He also won a stage, and finished fifth, at the Baby Giro.

His reward for last year’s excellent form was a place on one of the world’s best teams. Now he hopes to continue his upward trajectory and follow in the footsteps of fellow countrymen Geraint Thomas, Luke Rowe and Owain Doull.

“I just want to get as much experience as possible from these riders I have looked up to for a number of years, to understand the different level and put in my mind what is my best attribute in cycling,” said Williams.

“I wouldn’t be cycling if I didn’t want to win races so, if there any opportunities to go for, then I will be trying to grab them with both hands.

“I’ve never been more motivated to be back on the bike and I’m just looking forward to getting out there and making the most out of 2019.”