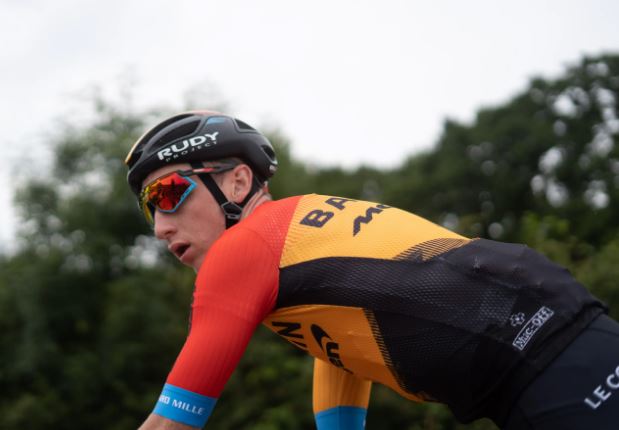 Two Welshmen will be on the start line when the Vuelta a Espana begins on Tuesday in Irun near Bibao. Stevie Williams and Scott Davies will both be riding for Team Bahrain McLaren, but for Williams just competing in a three-week Grand Tour has already been a major accomplishment and testament to teamwork, as he tells Owen Morgan.

World Tour team cyclist Stevie Williams benefitted from a career-saving collaboration between Sport Wales and his Team Bahrain McLaren outfit which has helped him return from a long-term injury.

One of Britain’s most promising young riders, Williams’ career had been put on hold for 18-months by a mystery knee problem shortly after signing for Team Bahrain McLaren – one of the sport’s top teams.

Surgeons had told the Aberystwyth-born rider that the extremely rare condition could put an end to his burgeoning career.

But Bahrain McLaren and staff at the Sport Wales Institute joined forces in a textbook example of sporting teamwork to put the cyclist’s welfare first and get him back on the road.

The Ceredigion cyclist – who will ride the Vuelta a Espana along with fellow Welshman Scott Davies – has paid tribute to the patience, care and support he had received.

Williams, who admits to experiencing some “dark days” during his road to recovery, said: “I’m glad I stuck at it.

“As I’ve said a number of times, Bahrain McLaren and Sport Wales . . . that collaboration was fantastic. Without that support I would be nowhere near where I am now.

“For a young lad it was really important to have that support. I’m just really grateful to everyone.”

Williams’ knee problems came to light in the winter of 2018, shortly after he made the dream move to Bahrain McLaren as a new professional.

Boasting a roster featuring the likes of multiple Tour De France stage winner Mark Cavendish, Bahrain McLaren had tracked Williams as he produced a number of impressive performances for SEG Racing Academy, including a fifth place finish at the Under-23 version of the Giro D’Italia.

But no sooner had he joined the team, Williams started suffering a sharp pain in the outside of his knee with every pedal rotation.

What followed were months of visits to doctors and physiotherapists in a bid to get to the bottom of the problem.

Williams admits there were times when his dreams of a career as a professional bike rider seemed to have been shattered.

Williams told Dai Sport: “It took a year to actually work out what it was and that was the most difficult thing. It started in November 2018 and then the final diagnosis wasn’t made until around September 2019, which was a month before the surgery.

“It was a long 12 months going backwards and forwards trying a lot of different techniques.

Nice visit from @BahrainMcLaren‘s @stevierhys_96 to our HQ before he heads off to Czech Tour, his first race after recovering from an injury for one and a half years.

He looks really fit and healthy, so watch out! 🙌#YourTalentOurProfession pic.twitter.com/TJllwvsE2k

“It was a tough little road. There were a lot of dark moments. You are thrown out of your routine, aren’t you?

“I am so used to going from country to country, from race to race, training camps and being around my team, being around the staff.

“It’s quite depressing, to be honest. It was not a nice place to be, there were a lot of times when I thought this is just not going my way.

“I remember maybe mid-2019 and I was sat in a room with the surgeon having a discussion about the next steps we were going to take.

“I remember him mentioning that if this doesn’t work then it could be a possibility that my career would end.”

Despite that gloomy prognosis, Bahrain McLaren were determined not to give up on a young rider they rated so highly.

In a short film detailing Williams’ road back to fitness, team principle Rod Ellingworth explained why he was so determined to be patient and do everything possible to get their young rider back in action.

Ellingworth says: “Most young lads’ dream is to turn pro for a World Tour team and Stevie had done this.

“They get this two year window to prove themselves whether they are good enough or not. There is massive pressure on them.

“For myself and all the staff it’s our job to support them through that period. Some guys take it on really well and some guys struggle with it. But obviously for Stevie he’s just not had the chance to show.

“When I was looking at what was happening with Stevie, we weren’t getting anywhere. There was just no real momentum, there was no movement at all so I wanted to dig deeper.

“I just kept pushing and pushing until we found the right people who investigated and found the issue that Stevie had.”

The problem was eventually discovered to be a rare condition known as fabella syndrome, which had been further complicated by hamstring tendonitis.

Williams would need surgical intervention, but Sport Wales and its lead physiotherapist Dan Grimstead would play a key role in getting Williams back on track.

Ellingworth said: “Once he’d had the operation, we could put a plan together.

“The key thing there was trying to get the two groups – our professional team and the institute – to work together and obviously with Stevie living in Wales, it was better that the institute took the lead on a day to day basis and Dan did a really good job.”

Williams says being treated in his native Wales, under the wing of Grimstead and his team in Cardiff played a huge part in his recovery, both physically and mentally.

“When you are going through a tough injury, the key thing is to find a place where you are happy to be, so around friends, family and basically Newport was my centre of contact to everyone,” said Williams.

“I’d spent the last four or five years down there with Welsh Cycling from when I stepped up from junior to under-23.

“So I’ve always had that relationship with Sport Wales, being in and out of the gym and doing stuff with the nutritionists, psychologists, the gym instructors, the physios and doctors.

“So when I needed work with my knee, we decided that the best place to be would be at Sport Wales, daily. Basically full hands-on and being looked after.

“That’s how it all began. I spent maybe a good five or six months fully at Sport Wales in one chunk, just working on it.

“Dan has been like my second father for the last six months, well, the last year, to be honest. I have been in touch with him for the last-year-and-a-half in total.

“He’s certainly looked after me well down there, as have all the guys in terms of point of contact and being looked after, speaking to them daily, all my exercise and all my sessions, have been based around him.

“We have been joined at the hip for a while, so I am forever grateful.”

Grimstead is equally complimentary of the partnership between Bahrain McLaren, Sport Wales and the commitment shown by Williams himself.

“We got him back here and he was in here pretty much every day, so we had a really intensive regime going, multi-practitioner input, so real teamwork,” says Grimstead.

“Stevie was really great, he was really dedicated, very committed, which was fantastic, a very easy guy to work with.

“We are absolutely delighted, fingers crossed Stevie can now crack on and serve his team well.”

Having been returned to the care of his team for a training camp in Germany, Williams made his return to competitive cycling in August when he lined up at the Czech Tour.

But once again, his team were keen to put Williams’ welfare first and not put any pressure on him by expecting too much too soon.

Meet our team for @lavuelta:

Although Williams didn’t finish the Czech Tour he was just delighted to be back amongst the peleton.

“Obviously I wasn’t going there with any targets or intentions, it was more about getting a number on my back again and trying to settle into racing again,” he said.

“I took a bit of a kicking to be honest! I’d been training okay for a couple of months, but you can’t train as well as you race. You can’t replicate the different styles. It was tricky.

“A year and a half is a long time to be away from anything so it will take a bit of time. I’m just happy to be back with the team and racing again.

“It’s always disappointing not to finish but it was never really a target to even finish. It was just to get around it, get amongst it and get the feel for racing again.”

Williams is grateful for the way his return to racing has been handled, with the minimum of pressure and expectation.

“It’s been like that from the first day of my injury. No pressure, no dates to come back it’s always been what’s the right thing for me and the best way of coping and dealing with the injury.

“You put enough pressure on yourself, but to get that support from the team as well, it makes the whole process of rehab a lot easier.

“I just couldn’t imagine if it had been the other way around and how difficult that would be. I was very lucky in that regard, how good everybody was with me.

“That was always their intention, it was always me first and how I felt. The main and nicest thing was always what’s best to get me back on the bike again.

“There was never a date, or a timescale to be back racing or to be back doing this training, or that training.

“Things have been going well, it’s been a slow process, but it has been a perfectly timed run with everything. It wasn’t an easy injury to come back from.

“A little niggle in my knee has taken a year and a half to come back from. I always think back to Luke (Rowe). He broke his leg in 25 places and came back quicker than me. But that’s just how things go.”

Now Williams – who has tuned up for the Vuelta with a couple of major one-day races in Belgium – is keen to put the injury behind him and make up for lost time.

“Short term it’s finish the season off well, to find myself racing consistently and competitively by the end of the year with no hiccups with the injury, that is the perfect short term goal for me.

“Long term, it’s to find my feet again. It’s been a weird couple of years, so to just wipe the slate clean, hopefully learn, progress and just race.

“Just become a solid rider, whether that’s in general classification or stage races, or domestique, whatever.

“I just need to find what’s best for me – winning races and racing the biggest races in the world and hopefully continuing this journey with Bahrain McLaren.

“I think for a rider like myself it’s always the Grand Tours that are going to be apetising to do. Obviously the Tour De France is the biggest race in the world so to go there one day would be fantastic and also the Giro, Italy is always beautiful.

“I’m confident I can find my feet again and get to a good level and start up again.”

My Fight Back to the Peleton: The Story of Stevie Williams can be watched here: https://lecol.cc/blogs/content/racing-the-story-of-stevie-williams

One thought on “Stevie Williams . . . From Darkness And Pain To The Start Line In Spain”