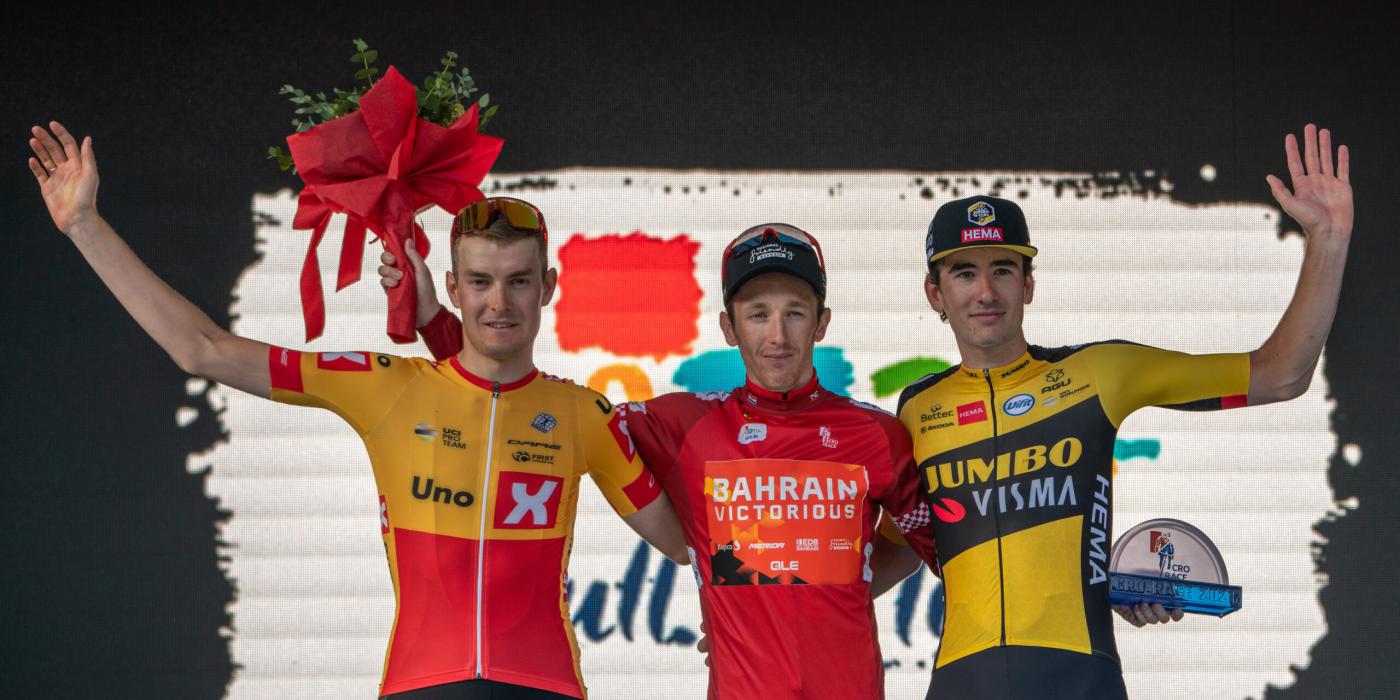 Stevie Williams on the winner's podium.

Stevie Williams followed up his first professional stage win on Saturday by completing his first pro race win in Croatia on Sunday.

Winning the Cro Race 2021, formerly the Tour of Croatia, completes a remarkable comeback for the Aberystwyth cyclist who two years ago feared his career was over.

During 2019, was told a mystery knee injury could end his budding career just months after having graduated to the professional ranks.

But on Sunday, the Bahrain Victorious rider was standing on top of the podium in Zagreb celebrating the biggest success of his career so far.

Williams had put himself into the leader’s red jersey when he won the fifth stage of the race on Saturday.

Starting Sunday’s 157.5k final stage from Samboor to Zagreb, the Welshman boasted a 17-second lead over his nearest rival.

And despite a number of attacks from his nearest rivals, the former SEG Racing Academy rider retained his lead to secure overall victory.

The Ceredigion rider also finished second in both the points category and the battle for the King of the Mountains jersey.

A delighted Williams said afterwards: “You never start a day expecting for sure, but I was confident in myself and in my team who did an excellent ride, and as a team, we were fantastic all day.

“It was a lot harder stage than I predicted. In the end, it was pretty tactical the way it all happened, but all stage, it was pretty demanding, windy, quite technical, lots of changes of directions.

“My teammates brought me perfectly to the circuit and gave me the best chance to stay safe and go for myself.

“As a team, we did a great job the whole week, and I am proud to be a part of it. This win is a team victory.”

Williams had been able to spend most of the final day protecting his lead in the peloton.

But during the last six kilometres Norwegian Markus Hoelgaard (Uno-X Pro Cycling Team) and Mick van Dijke (Jumbo-Visma), who started the day in second and third place, started to attack.

Williams skilfully covered their attacks and although he was pipped to the stage win in a thrilling final sprint by Van Dijke’s twin brother Tim, Williams took the overall win by 17 seconds over Hoelgaard and Mick van Dijke in third.

The race win is seen as a potential breakthrough moment for the 25-year-old who has battled back from a serious knee injury which first came to light in the winter of 2018 shortly after he made his dream move to the profession ranks.

However a collaboration between Sport Wales and the Bahrain team, combined with Williams’ hard work and dedication has seen him return to action and start to realise the potential which saw him gain a fifth place finish at the Under-23 version of the Giro D’Italia earlier in his career.

Bahrain Victorious Sports director Franco Pellizotti said he was delighted with Williams’ win after the team had stuck by their rider:

“This success is important for the team at the finish of the season,” he said.

“And especially for Stevie, who showed his great effort and physical strength after a tough and extended period of injuries.”