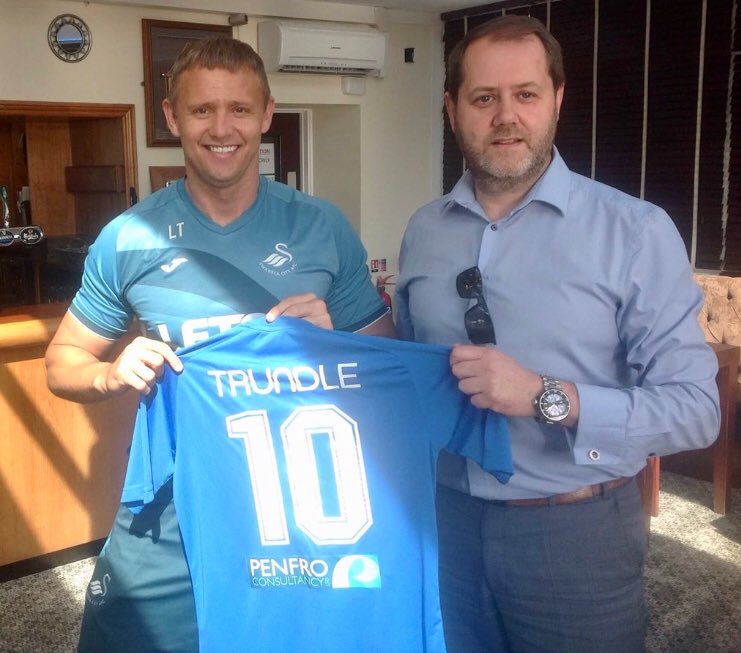 Lee Trundle is a Bluebird! He has signed for Haverfordwest County, whose club nickname is the Bluebirds.

Lee Trundle has signed for the Bluebirds!

No, the talented striker has not joined manager Neil Warnock’s Cardiff City, but he has linked up with the West Wales’ Bluebirds.

Haverfordwest have the same club nickname as Cardiff – and Trundle is out to win a third successive Welsh League title in 2018-19 after signing for the Pembrokeshire club.

County are intent on returning to the top tier in Wales and sources in West Wales suggest they are paying Trundle up to £400 a week to lead the charge.

Trundle, 41, fired 79 goals 54 matches for Llanelli and played a huge role in Llanelli’s rise back to the JD Sports Welsh Premier League.

While the Reds prepare for their top tier challenge, Trundle is focused on scoring more goals in Welsh League Division One.

“Happy to be on board,” said Trundle, who has a passion for playing football and an ability which means he remains a prolific goalscorer in a career which has lasted almost a quarter of a century.

The arrival of Trundle will make Haverfordwest firm favourites to earn promotion next season, but they will face a strong challenge from manager Rhys Griffiths and his Penybont FC team, while Cambrian and Clydach, Afan Lido and more will be keen to maintain a challenge.

Newly-promoted clubs Llantwit Major, who included experienced players like Anthony Rawlings and Mike Hartley plus the raw talent of teenager Sam Snaith,  Pontypridd Town and Ammanford will all be aiming to make an impact in Division One.

The addition of Trundle to the Haverfordwest squad, though, certainly puts them among the favourites to go up. They were awarded a tier one licence in the season just ended, but finished runners-up to Llanelli Town.

Steff Williams scored 20 goals for County’s Bluebirds last season and could link up with Trundle in attack.

A statement by Haverfordwest saidL: “We are delighted to announce that former Swansea City striker Lee Trundle will play his football at the Conygar Bridge Meadow next season.

“Lee needs no introduction and his illustrious professional career with Wrexham, Swansea City, Bristol City, Leeds United and more recently Llanelli Town in the Welsh League demonstrates our commitment as a football club that we wish to play at the highest level within the Welsh Football Pyramid.

“As well as the attraction of signing a player of exceptional goal scoring ability, Lee will bring experience from which many of our talented local youngsters will greatly benefit.”