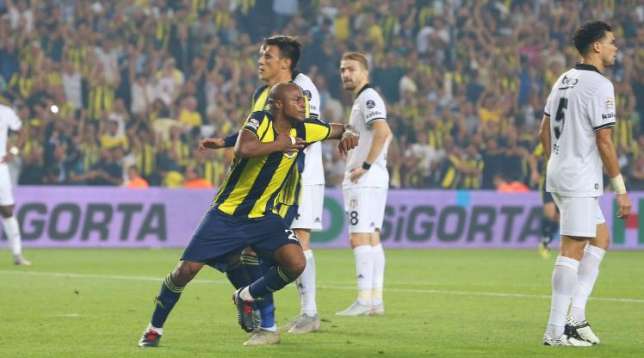 Andre Ayew has re-discovered his goal touch in Turkey after leaving Swansea City on loan.

While the Swans struggle to find the net back home in the Championship, where they have gone three matches without scoring, Ayew has scored twice in three matches for Fenerbahce.

The latest of those strikes came in the Instanbul derby on Tuesday night, when the Ghanaian striker grabbed the equaliser against Besiktas in a 1-1 draw.

Ayew failed to score for the Swans last season after his  £18m move from West Ham in January and was sent out on loan in the summer as the club’s American owners looked to cut costs.

The 29-year-old has played six matches in the Turkish league and after an unproductive start has since scored twice, with his first coming against Kayserispor at the start of the month.

“I scored my second goal here and I’m happy, but today we wanted three points very much, so I’m a little disappointed,” said Ayew.

The Swans have scored just twice in their last six matches and aside from Oli McBurnie’s four goals so far this season, they have managed just three others – from Yan Dhanda, Jay Fulton and Kyle Naughton.

Manager Graham Potter acknowledged the concern following last weekend’s 0-0 draw at Middlesbrough, and will be hoping his side can put things right when they face QPR on Saturday, who have already conceded 15 league goals so far this season.