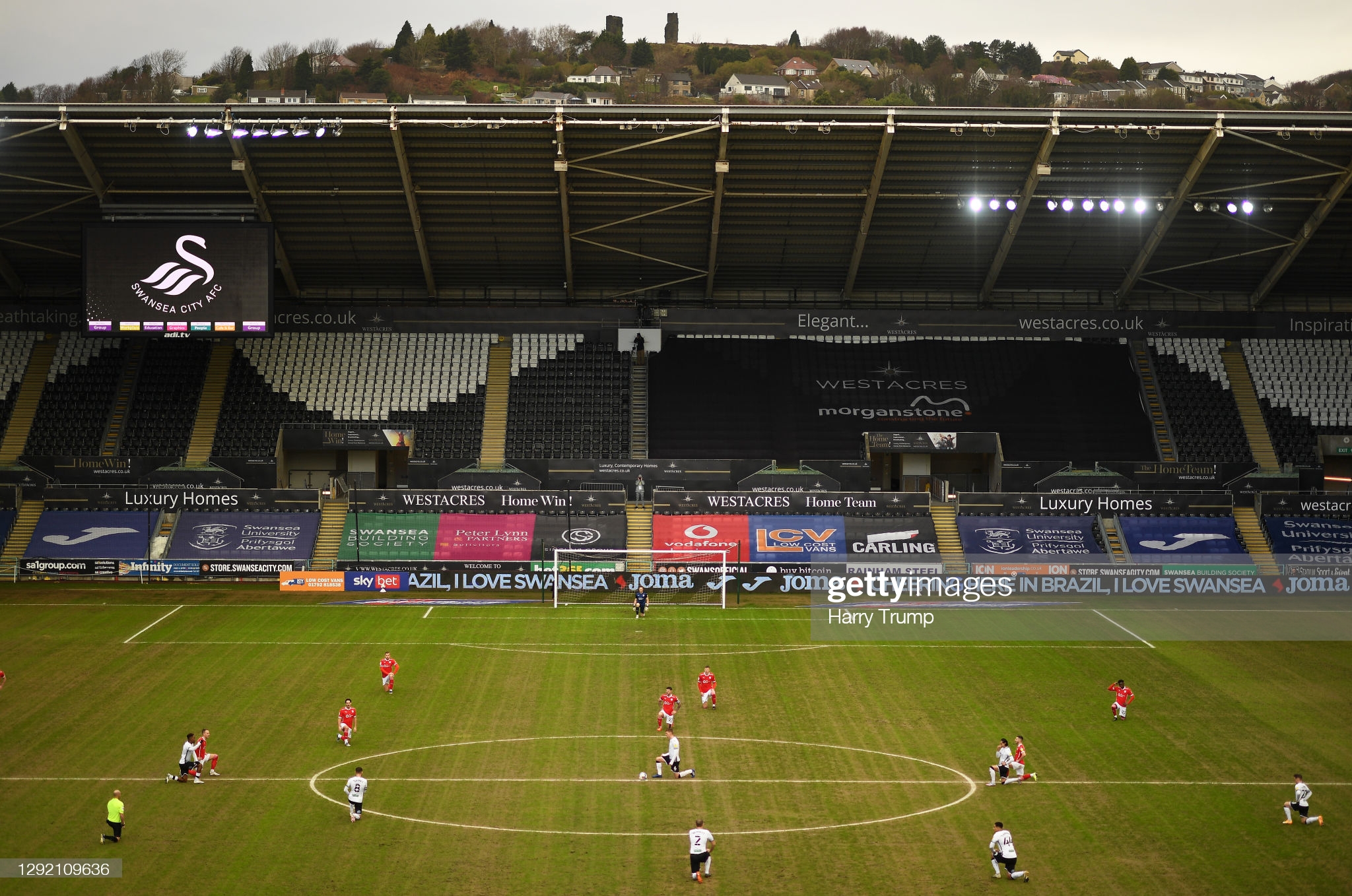 Swansea City are making plans to prevent any more protests against their players taking the knee this weekend, following midweek disruption of the gesture before their match against Reading.

The club are aware they have been targeted by opponents of the Black Lives Matter (BLM) movement and have taken steps to try and prevent a repeat when they host Watford on Saturday.

Demonstrators are understood to have gathered in the area under the South Stand near the entrance road to the Liberty Stadium.

The group – who have staged demonstrations at Swansea’s last two home games – have been warned by police they are breaching Covid-19 rules by gathering outside the Liberty Stadium.

Before Swansea’s goalless Championship draw with Reading on Wednesday a loud series of boos, jeers and horns were heard from outside the stadium. It was timed by protestors to coincide with players from both teams taking the knee in support of BLM.

A similar demonstration had taken place before Swansea’s win over Barnsley before Christmas, albeit on a smaller scale. Swansea immediately launched an investigation into the demonstrations after the Reading game but did not comment further.

The club are, though, readying themselves for a repeat protest when Watford arrive this weekend. South Wales Police were present at the demonstration before the Reading game.

They will do likewise again this weekend for Watford and have reiterated the message that large gatherings of people are currently prohibited in Wales under Welsh Government guidance.

“We have designated football liaison officers who work with clubs throughout the force area, including Swansea City, to help prevent and deter crime and anti-social behaviour.

“Officers engaged with protest organisers and attendees in order to remind them of their obligations under the current Covid-19 legislation, including the prohibition on gatherings and the overarching goal for everyone to take personal responsibility to keep Wales safe.

“We will continue to work with the club and review any footage from the protest.”

The demonstrators who have been at Swansea’s last two home games have described the Watford match as “our big one” in a video posted online.

In the video, one unnamed protestor said: “I’ve supported the Swans all my life and I will never, ever cheer for them again. Get BLM out of the UK.”

Another added: “Bringing politics into sport is not on. Black Lives Matter is a Marxist organisation which preaches anti-white hatred.”

The small group carried placards before the Reading game which read “Boo Like Millwall.” It referenced the BLM acronym but also showed their support for Millwall fans who booed their players taking the knee when they faced Derby County on December 5.

me getting ready to protest with the swansea city clique this morning! good turn out from the boys @guccigeorg @jxckbastard @midc3ntre @Rossi16_ @RiskyRouts expecting more next time! pic.twitter.com/F0LSvlWjX0

There have also been similar incidents to the Millwall and Derby game at Colchester and Cambridge.

The protests outside the Liberty Stadium are an unwanted distraction for Steve Cooper’s Swansea side who are flying high in the Championship and are pushing hard for automatic promotion.

The Swansea City Supports’ Trust have yet to comment.