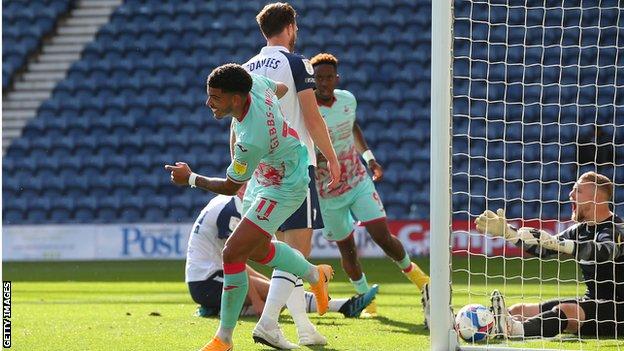 Steve Cooper says there are plenty more goals to come from Morgan Gibbs-White after he marked his league debut with Swansea City’s winner over Preston.

The loan signing from Wolves’ 53-rd minute strike gave the Swans the perfect start to their Championship campaign with the away win at Deepdale.

Cooper was pleased with how his defence coped with Preston’s push for an equaliser but is relishing the impact Gibbs-White could have this season.

“Morgan has got goals in his game, there is no doubt about that, he is a very positive player and willing runner. You could see that with his goal today,” said Cooper of the England u21 international.

“I thought all the attacking players did well. Andre (Ayew) and Jamal (Lowe) ran so hard and put their backline under a lot of pressure. They did not let them play with any real composure or quality.

“I liked us, I thought we were threatening. Maybe not so much after we scored, but that’s understandable.

“If you think about it, we are only three weeks in from the start of pre-season.

“We are not going to be 100 per cent up to speed, so the fact we have picked up a win here in the condition we are in at the moment is a big plus.”

The win gave the Swans their first win at Preston since 2008 as they look to produce a promotion push this season.

“It is definitely a great start, any result you get here is a good one,” added Cooper.

“It is a really tough place to come as you could see from the record they had here last season. They have pretty much the same squad and the same team and it was tough.

“We had to show the other side of our game after that with lots of balls coming into our box to see out the result.

“Yet Freddie (Woodman) has not really had a save to make and that tells you everything about our heart and soul in those latter stages.