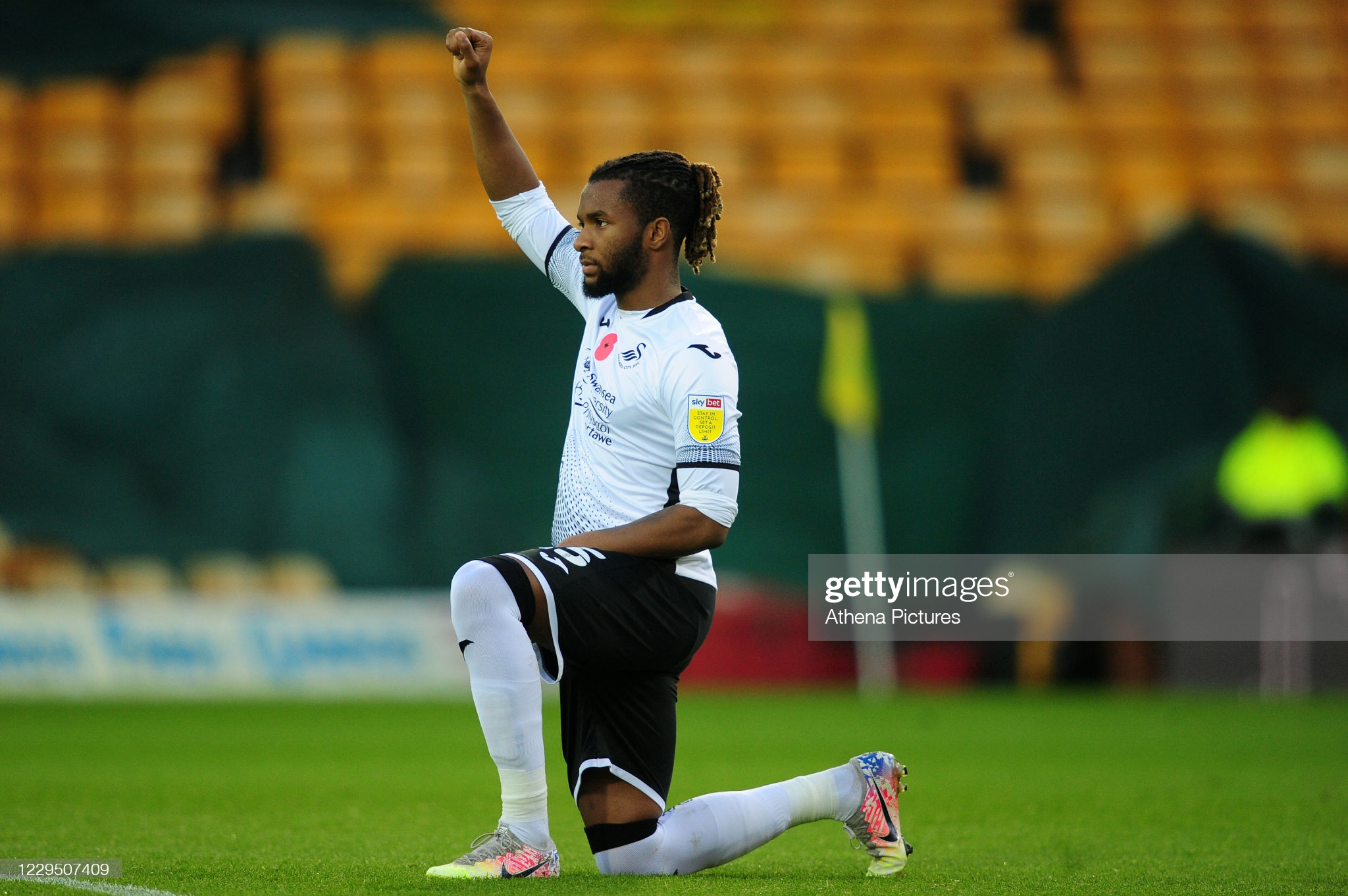 Swansea City are set to investigate the blaring horns and booing from outside the Liberty Stadium which occurred while players were taking the knee before their goalless draw with Reading.

The club said they will look into the incident which appears to show a shift from protests inside a handful of grounds that recently were allowed crowds, to outside.

The noise appeared to be an organised attempt directed from people behind the South Stand and lasted for the duration of the gesture that has been supporting the Black Lives Matter campaign since the summer.

It follows similar protests, most notably at Millwall, where a section of fans inside the ground booed the players for the gesture.

Swansea City head coach Steve Cooper said he did not hear the protests clearly enough to make much comment, but added: “I heard some noises but I couldn’t tell what it was.

“Let’s find out and the reasons behind it. In terms of taking the knee, we are a club which has continued to commit to it.”

Cooper’s opposite number Reading manager Veljko Paunovic, said: “I was aware of the noise, but I didn’t understand what was going on so I’ve got no comment.”

Reading goalkeeper Rafael Cabral produced a string of superb saves to deny Swansea City a third straight victory – pulling the club back down into the Championship play-off places.

With Brentford beating Bournemouth earlier in the evening, the Swans needed to continue their recent strong home form, which had brought five victories in their last seven games at the Liberty Stadium.

But they found Raphael in inspired form, underlined when he reacted sharply to deny Andre Ayew’s 71st minute header which appeared to have gone past the former Napoli keeper.

Paunovic was fulsome in his praise of Cabral after the Brazilian helped deny Swansea.

Rafael came in for criticism from some Reading fans after he conceded 12 goals in five games in November, but his Serbian manager claimed he never lost faith.

“Raphael was the man of the match and I’m very happy,” said Paunovic.”He showed that he is the pillar of our defence and was very important in us getting this result.

“I always had huge belief and trust in Rafael. I never had any doubts. I was never upset with his performances in the past.

“From the whole team, it was a great performance. In defence, we showed great spirit and identity, we never gave up and fought to the end. We are slowly recovering the identity we had at the start of the season.”

Swansea dominated from first whistle to last, but although they can boast the best defensive record in the Championship they can often find scoring a more difficult task.

On a newly laid playing surface, they were left frustrated after Cabral made outstanding saves to deny Andre Ayew, Jake Bidwell and substitute Joel Latibeaudiere, while Marc Guehi wasted their best opportunity by blasting over the bar from five yards.

Combined with Brentford’s win against Bournemouth, the result dropped Swansea out of the top two places and into third, but their manager Steve Cooper claimed to be satisfied with the performance level if not the result.

“It’s frustrating, but I don’t think we can be disappointed,” said Cooper. “We played well, the effort was good. Reading have been a dangerous team so far this season.

“For large parts, I don’t think it was poor finishing. Their goalkeeper had an excellent night, he made a load of good saves, one in particular off Andre’s head in the second half was top drawer.”

In the first of a succession of excellent second-half saves, Rafael denied Latibeaudiere, whose header appeared goal-bound.

Swansea were finding no difficulty in supplying a variety of crosses from all angles, but Bidwell’s nod down was scooped away by Rafael, before the Brazilian did magnificently to get his fingertips to Ayew’s glancing effort.