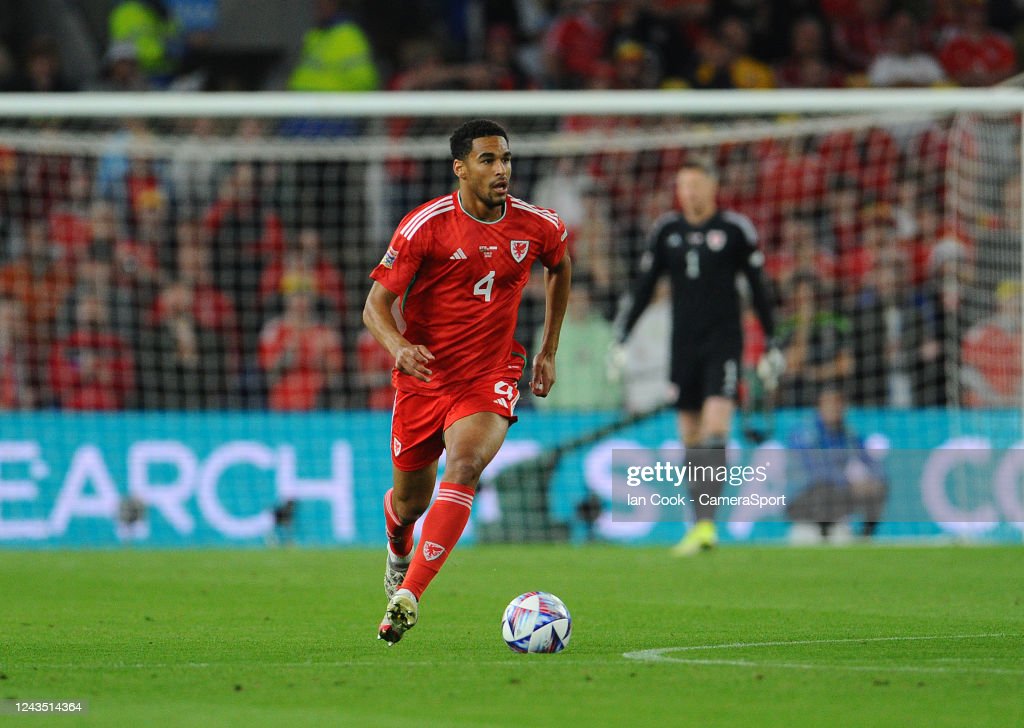 From Graham Thomas in Doha

Ben Cabango thought back to playing with his brother Theo in their garden.

“Me and him just always used to get at it,” he said. “Looking back now, it’s just good times.”

The stakes are vastly larger these days. Ben Cabango is the 22-year-old Swansea City defender preparing for Wales’ first World Cup game in 64 years, against the United States on Monday.

Theo is the 20-year-old winger getting ready to head to South Africa for Cardiff’s match against the Sharks in the United Rugby Championship.

“I think both of us have just pushed each other,” says Ben. “Because obviously you have a competitive nature when you’re both kids wanting to do better than one another.”

Think the smile says it all how Ben Cabango feels about being part of the 🏴󠁧󠁢󠁷󠁬󠁳󠁿🏴󠁧󠁢󠁷󠁬󠁳󠁿 WC squad pic.twitter.com/cvY9w6vepl

Ben played rugby and football until he was about 13, then chose to stick with the round ball. His brother played football for a while but now hopes his breakthrough year at the Arms Park will propel him towards the national team in the manner of the Dragons’ Rio Dyer.

Ben played in Swansea’s academy and started his professional career far from the limelight, with The New Saints in the Cymru Premier  in 2018-19.

He broke through with the Swans with his impressive form in the Championship and made the first of five international appearances for Wales against Finland in September 2020 as a substitute in stoppage time.

The likes of Gareth Bale, Joe Allen and Aaron Ramsey may be able to call on their tournament experiences from the glories of Euro 2016 – when Wales reached the semi-finals – but Cabango has a very different recall.

“I was in that Cardiff fan zone just celebrating with all my mates,” he says. “We all just want that feeling again. It’s surreal to think about beating big teams like that, and we know we can do it.”

Find it very impressive at only 22, this man already has over 100 appearances for Swansea City.

I’d love to see another 100 in a Swansea shirt from Ben Cabango, here’s to wishing! A very talented defender for both club and country. pic.twitter.com/jdTutjnTjK

His parents and girlfriend are traveling on Sunday to Qatar.

“If we win the first game, then confidence grows and, hopefully, it can take us a long way,” Cabango said.

Wales play Iran on Friday, then close the group stage against England on November 29.

“We can’t wait for that game. I know we’re looking at America first, obviously,” Cabango said. “There’s always a grudge between us and England whenever we play.”

While Cabango has been part of Wales’ defensive planning for Monday’s opener, Wales striker Kieffer Moore says he has been studying Zlatan Ibrahimovic in the hope of knocking England out.

The 6ft 5in forward has the same physical build as Swedish great Ibrahimovic and would love to end England’s World Cup interest in Qatar.

Moore was born in Torquay and won one cap for England C – the country’s non-league team – but qualified for Wales through his Llanrug-born grandfather and has become a firm favourite with Dragons’ fans since making his debut in 2019.

Feed Me Till I’m Kieffer Moore . . . Cymru’s Target Man Aims To Complete A Remarkable Journey Which Started At Truro City

“I can’t wait to knock them out, it would be amazing,” says Moore, looking ahead to Wales’ final group game against England on November 29.

“There will be no mixed loyalties. I can’t remember much (about being capped by England C). It was Estonia maybe and I think I came on towards the end of the game.”

The Bournemouth striker, now 30, has taken his time to reach the top after starting out at Truro and Dorchester, and trawling the lower leagues at Yeovil, Forest Green and Torquay with a spell in Norway thrown in for good measure.

But Moore has mirrored his impressive international form with a successful start to Premier League life on the south coast.

Moore’s fifth goal of the season came in the Cherries’ 3-0 victory over Everton and past England goalkeeper Jordan Pickford, with the striker admitting “it is nice to get one up already”.

Classed as a throwback by some observers because of his aggressive style of play, Moore adds: “In general people don’t like it.

“Along with the physical side not many people you come up against like that side of the game. It is a bit of rarity now and something you can pull on.

“You can dominate the person you are up against in a physical and aggressive way. I like to lean against stuff where I think I can have an advantage.

“One player that springs to mind (like that) is Zlatan. You can see his physical prowess, the way he holds himself, his character and the way he plays football.

“I have watched countless videos of virtually every striker worth watching. I like to analyse a lot of other people to see if that can help me and I feel I have learned a whole lot of stuff from those videos.”

Against Italy at Euro 2020 when another booking would have ruled him out of a potential last-16 tie, Wales manager Robert Page told him to ‘jump with no arms’.

Moore says: “I have made a real conscious effort of working around it for the last year or so.

“As dumb as it sounds, it’s not so much jumping without your arms but trying to lever yourself in that kind of way and doing different stuff to still have the same impact.”