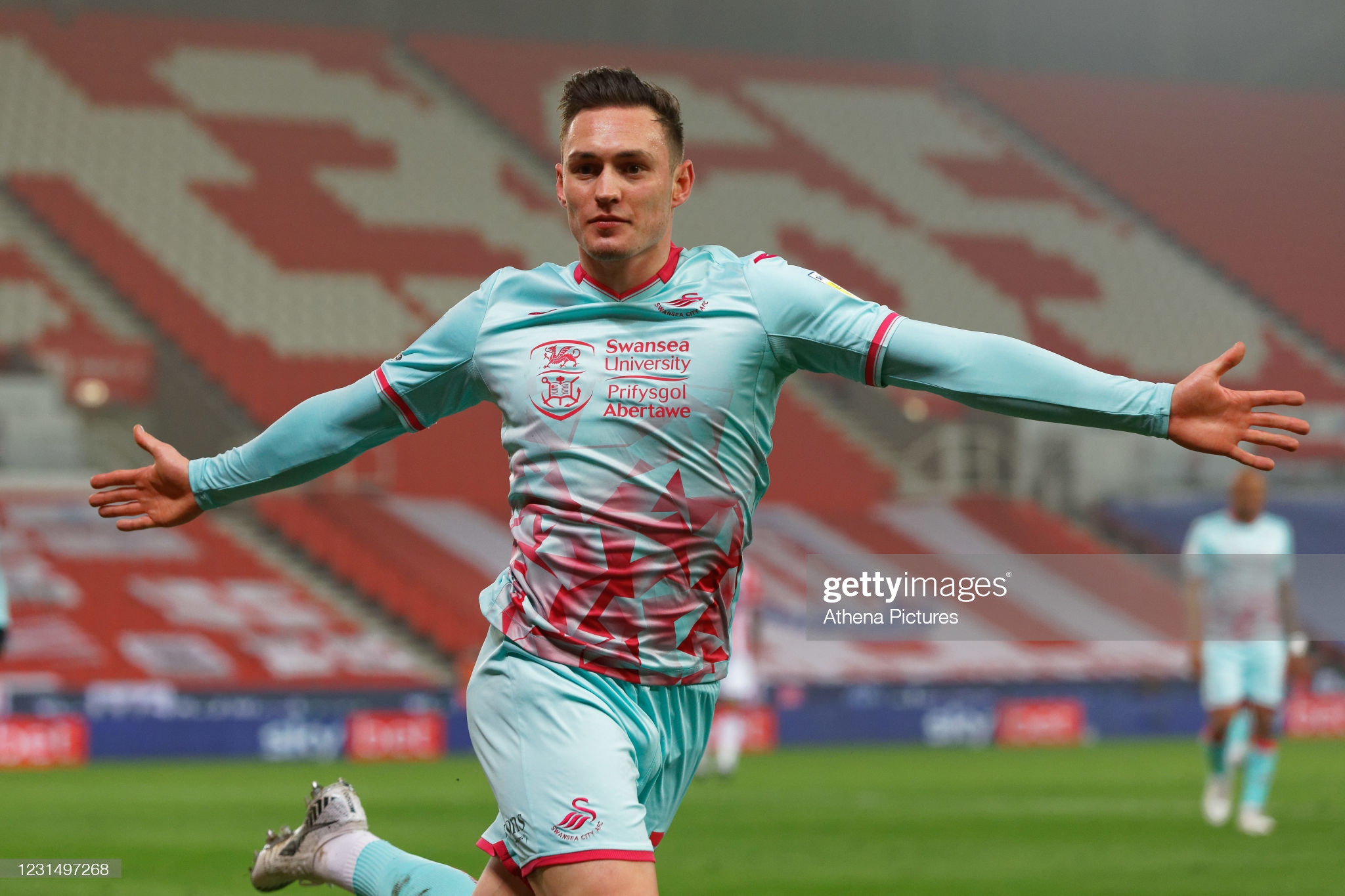 Swansea City’s promotion push is being driven along the hard yards by Connor Roberts, the man the fans have nicknamed the Crynant Cafu.

Roberts may not yet have hit the heights of the most capped Brazillian player of all time, but his energy levels seem to be sourced from the same type of internal battery pack.

The Swans and Wales wing-back is proving the dynamo driving his team’s promotion surge, but it is anything but a stroll in the park.

It was Roberts’ fourth goal of the season that got his side back on level terms at Stoke City in midweek before Andre Ayew applied the killer touch with a 96th minute penalty to bag three more points.

But it has been the 25-year-old Roberts  – labelled the Crynant Cafu by adoring, but absent, fans on social media – who has laid the groundwork for his side’s push to within one point of the automatic promotion places by starting and finishing every one of the 32 Championship games to date, an amazing 3085 minutes.

As well as averaging 96 minutes per game, the indefatigable Roberts is averaging 11.7 kilometres every time he pulls on his beloved Swans shirt.

That is more than seven miles per game and 232 so far this season in pursuit of promotion.

“We’re just hoping the win at Stoke will be the start of us putting together another little run,” said Roberts, who will be lining up against Middlesbrough at the Liberty Stadium today.

“We had been in a little bit of a sticky patch compared to the months before and it was a massive response to the defeat to Bristol City.

“It is always in our mind if we lose or don’t play well that we want to bounce back. We were flying up until we lost a couple recently.

“It isn’t a case of shouting and screaming, it’s all about keeping to the plan and doing what we know we are good at and the results will come back. We had been brilliant defensively up until recent games and we conceded another silly goal at Stoke.”

Neil Warnock’s gritty ‘Boro side will surely provide another tough day at the office for Roberts and co, but Swansea boss Steve Cooper knows he can rely on his home reared thoroughbred to run until he drops for the promotion cause.

“It has been a standing joke in our dressing room that Connor has been due the man of the match award, especially when the games have been live on Sky, and finally he got it at Stoke,” said Cooper.

Just when you thought the GIFs couldn’t get any better… #CrynantCafu pic.twitter.com/2tRiIvXzJK

“He could have scored another one and his crossing was good as well. He’s doing great and we are so happy with him.”

Roberts says his running comes naturally and if motoring up and down the flank is what it takes to secure points at this vital stage of the season, then he’s more than happy to rev up.

“We are doing whatever it takes to win, grinding out results even when we’ve not played as well as we like.

“But the ability to run and everything else has always been there. I don’t think I was able to show it so much last season, but I feel it is there this season and part of that is the understanding with the team as a whole.

“To be honest, the running up and down part of the game is the easy bit. I have always been able to run and keep repeating that.

“But running around is not what wins football games on its own. There’s no point making all those runs if you can’t pick the right pass, if you can’t show the necessary quality when the chance is there, or if you can’t take the right position or option defensively.

Me, Bruno and big Kev De Bruyne like. #mukkas https://t.co/jpOuzamweW

“To me, those are the hard parts of the game. We are professional sportspeople at the end of the day, running up and down is the least of the job really, that’s non-negotiable.

“If I was not able to do that then people would be right to wonder whether there was any point in me being here, you’ve got to be ready to put the effort in.

“I did some athletics, I played rugby, I liked swimming, cricket. I was always on the go, I was always doing something.

“I think that has always been inside of me, to go out there and leave everything out there.

“I can always have bad games, but there is never an excuse to stop running and not put that effort in. I’ll always have that as long as my legs allow me to do it.”