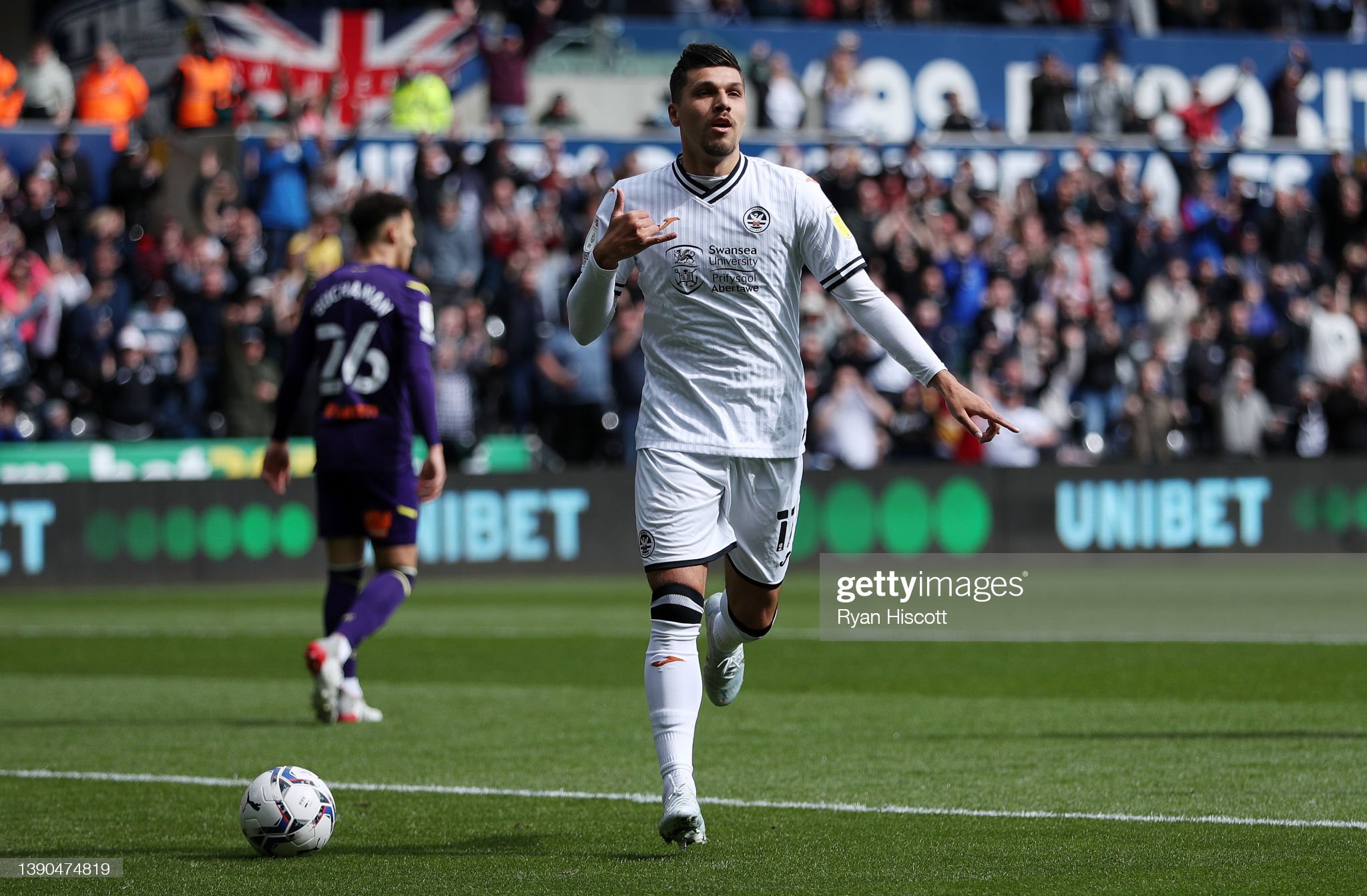 Joel Piroe is determined to keep scoring and provide Swansea City with the goals that might spark a late charge for promotion to the Premier League.

The Dutch striker scored his 20th goal of the season in his club’s 2-1 victory over Derby County at the weekend, which earned the Swans their third win in eight days.

Piroe had only scored five senior goals in a handful of appearances in the Netherlands for his club PSV Eindhoven, and on loan at Sparta Rotterdam, before he made a £1m move to the Championship last summer.

Since then, the 22-year-old has struck 18 league goals and two in the cup competitions to underline his potential and alert a number of admiring clubs to his talent.

I can’t get over how cool infront of goal Joel Piroe is.

We are so lucky to have a player like him down here, 20 goals for the season with six games left to play.

But Piroe insists there will be no let up now that he has reached the 20-goal figure – last achieved at Swansea by Oli McBurnie three years ago – as the Swans bid to maintain their current momentum with six games to go.

They are currently back in 14th place, but have a game in hand on six of the seven clubs between themselves and sixth place.

With a game in hand on sixth place Sheffield United, the gap is currently eight points and Piroe says: “I just want to finish as well as possible.

“Now I have reached 20, I don’t want to stop scoring. I want to win as many games as possible.”

“I have really enjoyed my time here. We hope to finish as strong as possible to show the fans that the trust they had in us, we are really fighting for them.

Joel Piroe becomes the seventh different Swansea player to reach 20 goals in a season since the stadium move in 2005. All from open play! Remarkable.

“I knew in the previous seasons they (Swansea) had played the play-offs. I was hoping to score as many goals as possible.

“I didn’t really know how many games I would play, I was hoping to play at least 20 to 25 games and to develop, get into the English style of football.”

Piroe has already been compared to two of the Netherlands’ greatest striker, Robin van Persie and Ruud van Nistelrooy.

It was van Nistelrooy who guided Piroe with individual coaching sessions at PSV and the Swans striker admits the former Manchester United star was one of his heroes as a child.

“They are great strikers,” he adds. “To be compared with them is very nice.”

“Sometimes, especially at the start of the season, it was a bit frustrating because we had a lot of possession but I didn’t really get to touch the ball that often. I like to get more involved.

“As a striker you always want to score goals as many as possible. I think I have adapted well to it.”

Piroe’s double against Derby were both struck first time when the ball was rolling towards him, a technique, he says, that comes naturally.

“I try to recognise how much space I have before I get the ball. If you know that you have a lot of space, you can just pick a corner.

“If you see the goalkeeper is moving to the short corner, you can try to hit it in the long one and vice versa.

“I think it always came easily to me. A ball like this, rolled really slow to me, as a striker you have to be able to hit that clean.”