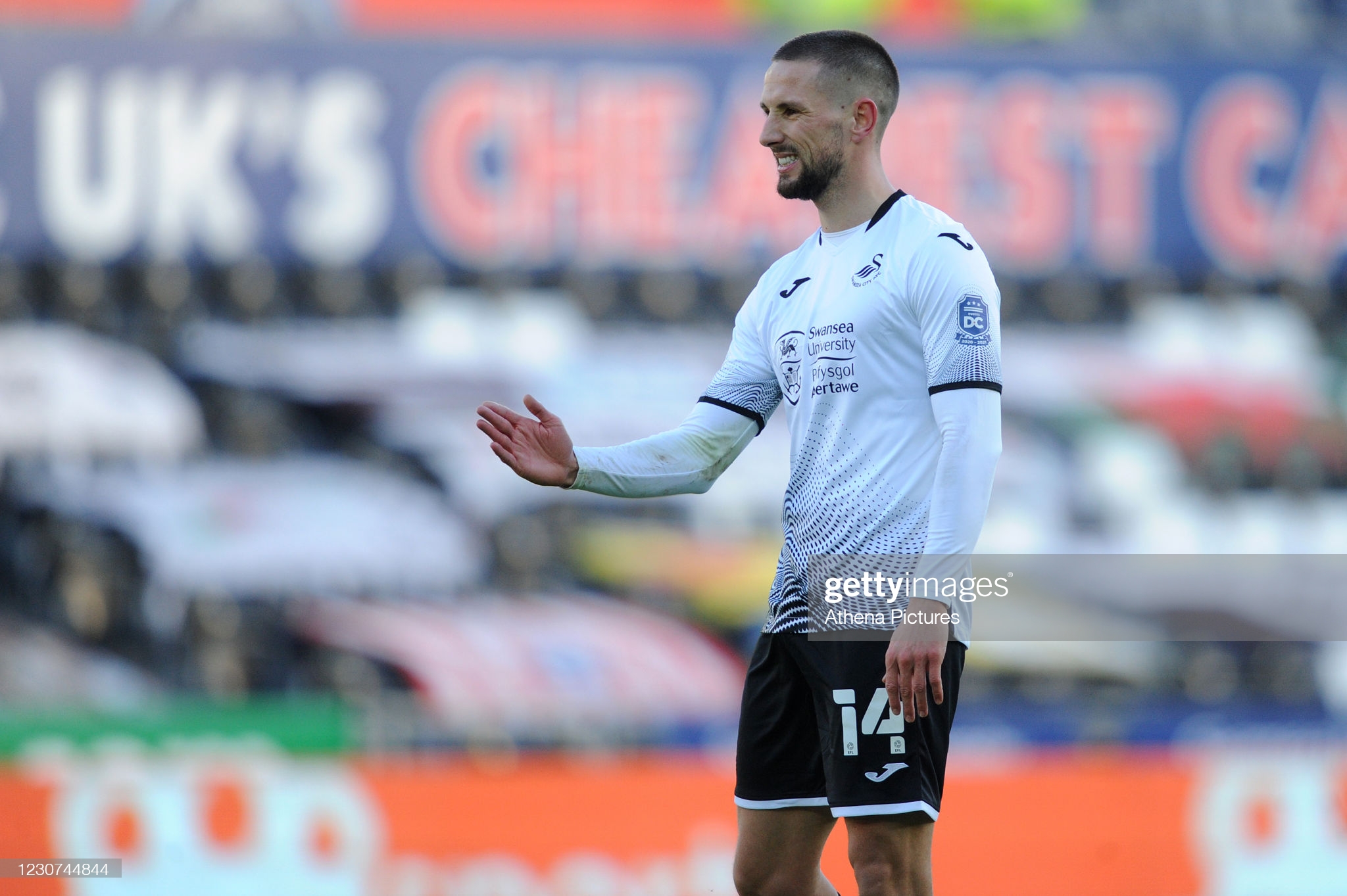 Conor Hourihane believes Swansea City can reach Wembley if they keep a collective cool head when the play-off temperatures start to rise.

There may be an unseasonal chill for mid-May at present but when the Swans take the field at Oakwell on Monday night to face Barnsley, then the thermometer on the field will start to head upwards with so much at stake.

Republic of Ireland midfielder Hourihane – who uses his own psychologist to make sure he remains tranquil in stormy waters – will retrace familiar footsteps in the Championship play-offs first leg.

Not only is Hourihane going back to Barnsley, where he played over 100 games as a young pup, but he is a veteran of three Wembley play-off finals, two of which were rewarded with promotion.

The last of those was two years ago with his parent club, Aston Villa, who reached the Premier League after beating Derby County, but only after edging past West Bromwich Albion over two super-charged semi-finals.

Dwight Gayle and Chris Brunt were sent off for the Baggies – one in each leg – and for Hourihane the lessons are clear.

“The one valuable thing I can pass on is the need for calm,” says Hourihane who kept his head to score the first penalty that sent Villa on their way in the shoot-out at the end of the second tie at The Hawthorns.

“You have to stay calm. Everyone builds up the play-offs – and yes, they’re big occasions – but it’s about playing with a calm head and playing smart.

“The team who stays organised is normally the one who comes out on top.

“Whether you score first or concede first, there is always a long way to go and you need to stay in control of your emotions.

“But this Swansea team reacts well under pressure. The team was top of the league at keeping clean sheets over the course of the season, so that shows an ability to stay calm and composed.

“There is a good mix in this team and we’ll go into this ready to back ourselves.”

Hourihane has scored five goals for the Swans since his January loan move from Villa and his ability from free-kicks could be critical to the hopes of Steve Cooper’s stuttering side.

But if the tie cannot be settled after 180 minutes – just as the semi-final wasn’t for Villa two years ago- then the 30-year-old will take responsibility and grab the ball to take the opening penalty.

He did it against West Brom and scored, just as he did for the Irish this season even though they went on to lose their play-off shoot-out against Slovakia for a place at the Euro finals.

“I’ve always been someone who wants to stand up and be counted,” he says.

“I want to be a character people can rely on. That’s why I was happy to step up and take the first penalty for Villa that night.

“It was the same in the play-offs to reach the Euros with Ireland against Slovakia this season. I wanted to step up to take the first penalty and to score and I did that – even though we ended up losing.

“It’s something I like to do – to back myself and get the team off to a good start. It’s nice when they go in.

“Whether it would be the first one or the last one this time, if it goes to penalties then I’ll definitely be standing up to take one.”

Even though the Swans were in the Premier League only three years ago and finished two points above Barnsley in fourth spot, they go into this tie as underdogs.

Under their inspirational French manager Valerien Ismael, the Tykes won an incredible 13 games in the second half of the season – second only to Watford.

The Swans beat Barnsley – 2-0, both home and away – in the regular campaign but Hourihane admits it’s his former club who have climbed confidently into the play-offs, rather than fallen into them as Swansea have done.

“Barnsley have done fantastically well. Not many people would have backed them to make the play-offs at the start of the season, but they have just gone from strength to strength.

“They’ve carried momentum with them and sometimes that’s what it’s all about. They’ve been on a fantastic run and never looked back.

Three starts in the Championship and three goals since signing on loan for Swansea in January. Conor Hourihane on fire atm!
pic.twitter.com/1F4prdygLN

“I’m delighted for them because they are a club I’ve always looked out for and wanted them to do well.

“But now my priority is Swansea and I want us to be successful.”

If the Swans go up, then Hourihane could yet extend his stay in Wales.

“I’ve really enjoyed my time here. It’s a good club with good people and a lovely place to live.

“I’m just fully focused on the play-offs and not thinking about my own future. We’ll take care of this first and then think about things afterwards.

“But I’d love to play in the Premier League again. It’s something I’m keen to do. Hopefully, if I can get promoted here then that may be the case.”