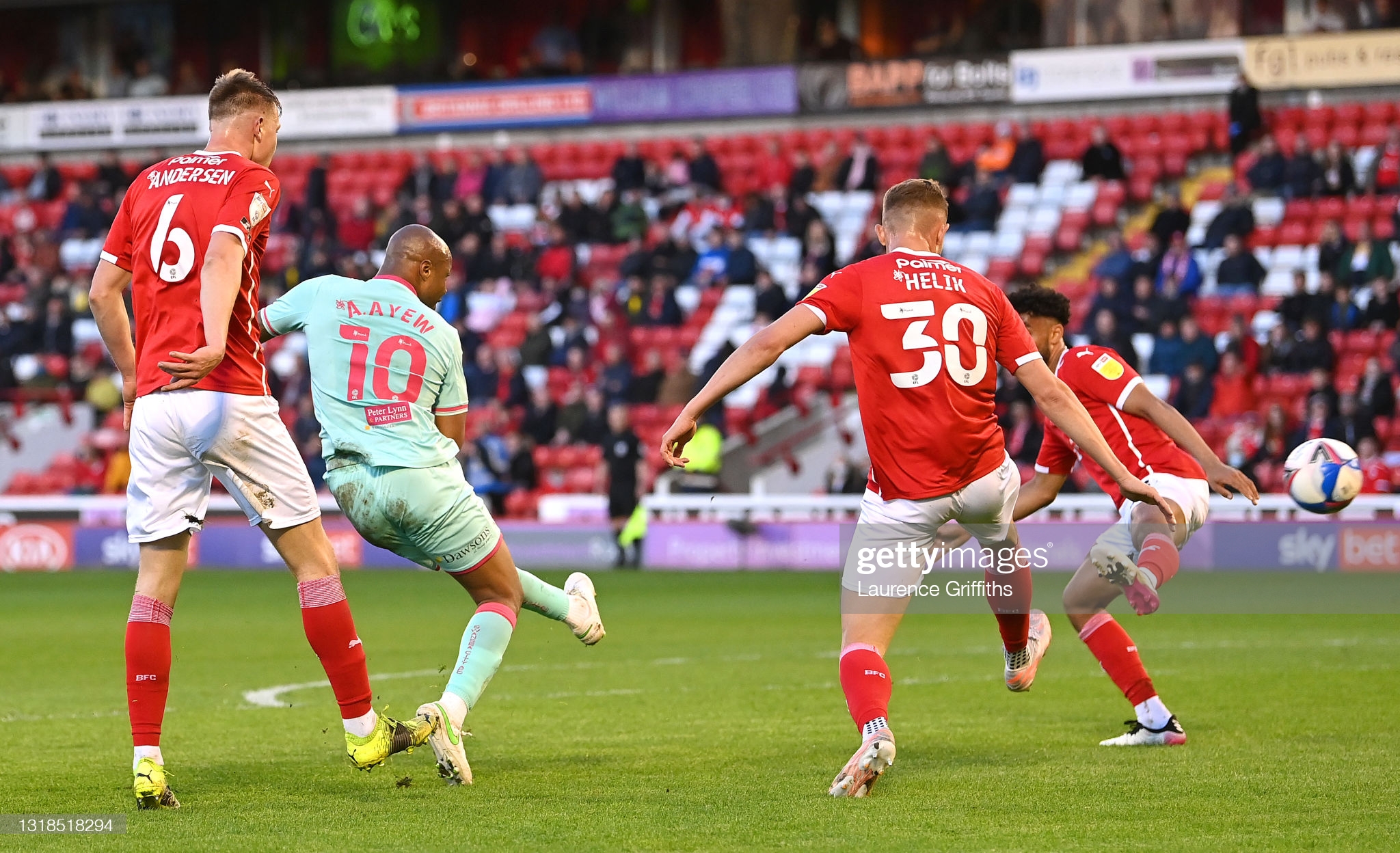 Steve Cooper praised the character of his Swansea City team after they earned a gutsy 1-0 lead at the halfway stage of their Championship play-off semi-final against Barnsley.

A classic Andre Ayew goal – curled into the far corner with skill and precision just before half-time – has given the Swans a vital advantage for the home leg on Saturday night.

If Ayew provided the individual class then he was part of a collective effort hallmarked with courage and resilience that ran right through the side.

Barnsley’s direct and physical approach put the visitors under huge pressure at times, but when the defence yielded, Barnsley found goalkeeper Freddie Woodman inspired form, although they did hit the bar late on.

One superb double save at the start of the second half protected the Swans’ lead while the relish for the battle shown by centre-backs Ben Cabango and Marc Guehi meant it was a night of frustration for Barnsley manager Valerien Ismael and his team.

The Swans have now won three times in three games against Barnsley this season, while the Tykes have made a total of 34 attempts on goal without scoring.

“It was a good effort from the boys as we knew the game would be a certain type,” said Cooper.

“If you don’t match them, then you can come unstuck but we didn’t.

“We managed to show some bits of quality with the goal being the obvious one, but we also looked a threat.

“It was an emotional game, and great to have the supporters back. I can’t wait until they are back at our place on Saturday. Knowing what our place is like, it will be something to savour.

“It was down to fine margins but I’m really pleased with the resilience and the effort of all the lads.

“We have two 20-year-olds in Cabango and Guehi but I just really believe in them. I think they can do the job really well.

“They are growing each week, which is brilliant to see, and they have Ryan Bennett telling them every day what it takes to play at the highest level. But we have it all to do again.”

That last reference was a nod to this time last year, when Cooper’s men also won the first leg of their place off semi-final by the same scoreline against Brentford, before 3-1 in the away leg.

“We have been here before 12 months ago. This means nothing unless we take the good things from this game and build on it.

“The final whistle in the next game is the crucial one in terms of what we want to achieve.

“Andre has come up with a bit of magic and given us a slight advantage, but we are only halfway.”

An uplifting sense of expectation filled the stadium before kick-off, with around 4,500 Reds fans allowed back in to watch their side for the first time since March 2020.

The match-day announcer had perfectly captured the mood. “It gives me great pleasure to be able to say this for the first time in 436 days,” he said. “Welcome to Oakwell!”

It was the first time Barnsley head coach Valerien Ismael, appointed in October last year, had walked to his dugout in front of a crowd and he received a rapturous reception.

The 45-year-old has transformed Barnsley from relegation candidates to Premier League hopefuls in seven months, while Swansea have reached the play-offs for the second-consecutive season.

The home side were first to threaten when fit-again skipper Alex Mowatt’s effort curled off target.

It was fast and furious, but low on finesse and the first moment of quality provided Swansea with the breakthrough in the 39th minute.

Ayew received Kyle Naughton’s pass down the right channel and his sharp turn inside gave him space to curl a sweet left-footed finish inside the far post for his 18th goal of the season.

Reds forward Carlton Morris replaced Dominik Frieser at half-time and had an instant impact as his shot was saved by Woodman, who then superbly denied Callum Brittain on the rebound.

Mowatt’s free-kick was saved by Woodman as Swansea were swept on to the back foot, but the visitors weathered the storm.

The visitors did all they could to slow the game down and their time-wasting tactics became more pronounced. With 10 minutes left it was all going to the Welsh side’s plan.

That was almost undone in the closing moments when Carlton Morris turned the ball goalwards from Mowatt’s corner, only to see his curling effort hit the crossbar.

Swansea survived and extended their unbeaten run against Barnsley to 17 matches.

The Reds beat the Welsh club on penalties in the League One play-off final in 2006, but their last victory against them over 90 minutes was back in 1983.