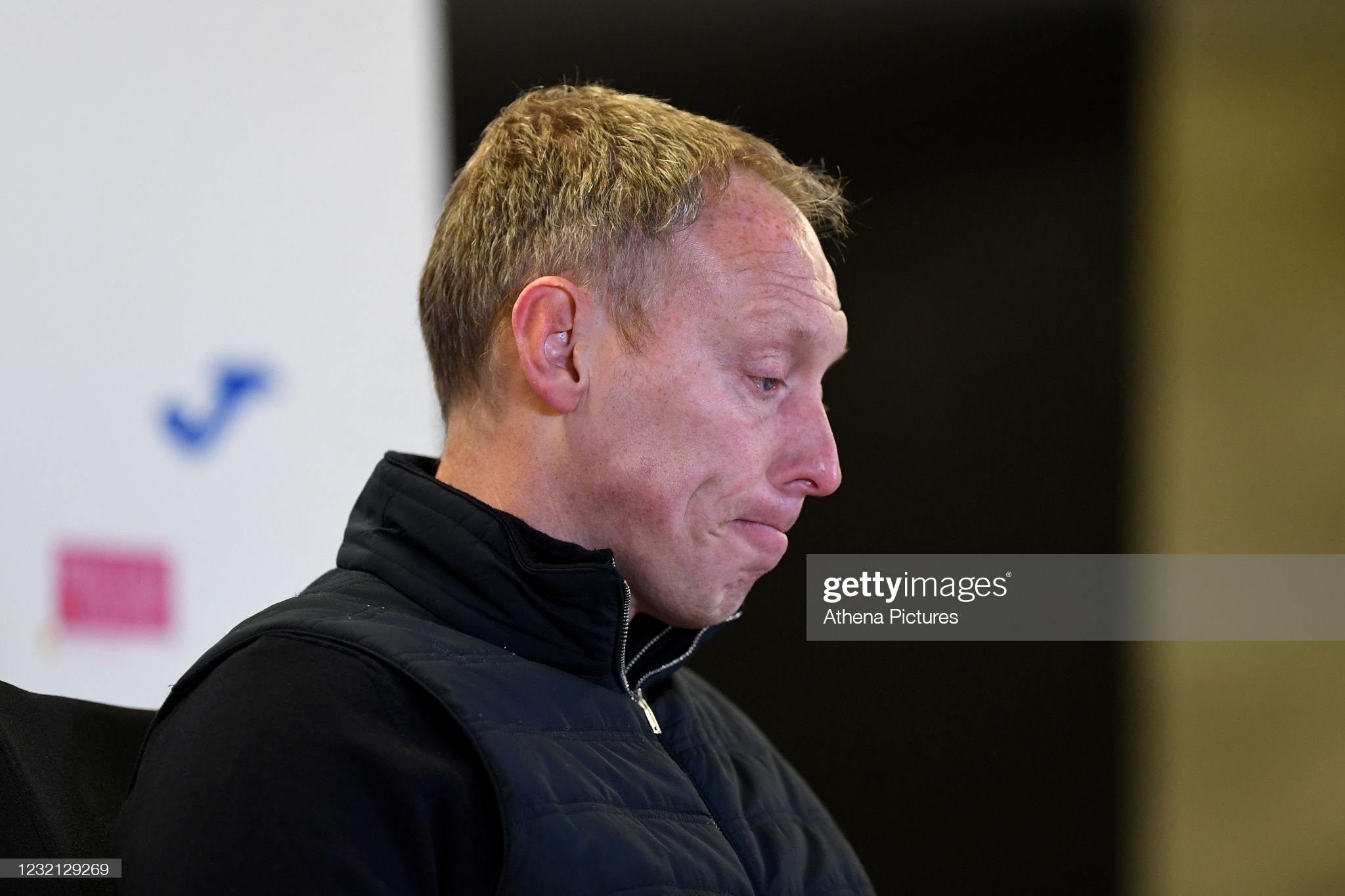 But after the latest last gasp setback at home to Preston North End – a 1-0 defeat that always felt like an accident waiting to happen – head coach Steve Cooper insisted he’s not about to hide away from the realities of the situation.

Cooper has not given up on automatic promotion, but a 10 point gap to Watford look unbridgeable, even with a game in hand.

More realistically, the battle for the Swans is now to hold onto a play-off place, which will be far from easy in this form and with Bournemouth resurgent.

Cooper’s side at least appeared about to end the run of the losses when in the first minute of injury time, former club hero Scott Sinclair’s close range effort cannoned off Freddie Woodman into Matt Grimes – and subsequently into the net.

“I’m not going to hide away from any of this,” said Cooper.

“We are not keeping cleaning sheets, not scoring, and not winning, and we can’t blame anything else outside of our circle. And that starts with me.

“We know the last four games have not been good enough and there have been disappointing stats to run alongside that which we’re not happy about.”

Indeed, for much of this game, it was Preston who dictated much of the narrative.

In the first half Emil Riis volleyed just over, Brad Potts had an effort tipped over by Woodman, while Swansea defender Marc Guehi was lucky to only see yellow after hauling down Ched Evans as the striker bore down on the penalty area.

In the second half, sub Sinclair – who scored the Wembley hat-trick that lifted the Swans into the Premier League 10 years ago – headed a golden chance over while Ben Cabango’s last ditch block denied Jayson Molumby just moments before the winning goal.

Swansea meanwhile, failed to muster an effort on target, despite a rare change of shape which saw Andre Ayew, Jamal Lowe, and Morgan Whittaker all start in attack.

“We’re not looking as much of a threat as we should we don’t look like scoring a goal,” admitted Cooper.

“Today we changed shape and there were little glimpses in the second half of what we wanted but it certainly wasn’t enough. I’m not dressing it up or making excuses. We are falling short.”

Cooper denied he was seeing any evidence of a lack of confidence in his players, but all but conceded that, despite having been automatic promotion contenders for so  long, Swansea’s main aim was now a top six finish.

“We won’t give up on the teams above us but obviously they are picking up more points than us. We’ve just got to get back to winning games.

“Still, if at the start of the season someone said we’d be fourth with seven games to go we’d have taken it. We are going through a difficult period and other results haven’t gone for us today but that’s our own fault – but a lot of things are still in our hands and we have to take confidence from that and fight hard.

“It’s time to stand up and be counted and I’ll be the first in line.”

Swansea City under Steve Cooper in a nutshell. https://t.co/uc8ZmZMFGd

For Preston’s interim manager Frank McAvoy however, the post-match outlook was very different.

“I’m delighted for the players and the supporters back home.

“That’s (the performance) what we’ve asked them. There’s great camaraderie, mutual trust and effort in the group. That’s always been there.”

It was Preston’s first win in Swansea since 1961, and McAvoy’s first in temporary charge, but he was in no mood to make the moment about him.

“It’s not about Frank McAvoy today. It’s the players who win games. We went to try and beat Norwich on Saturday, we wanted to win today, and it’ll be the same for Brentford on Saturday.”

And Cooper and co will know, that if their promotion hopes suddenly look dicey now, a further setback in London and by Saturday evening, those same hopes could well be hanging by a thread.