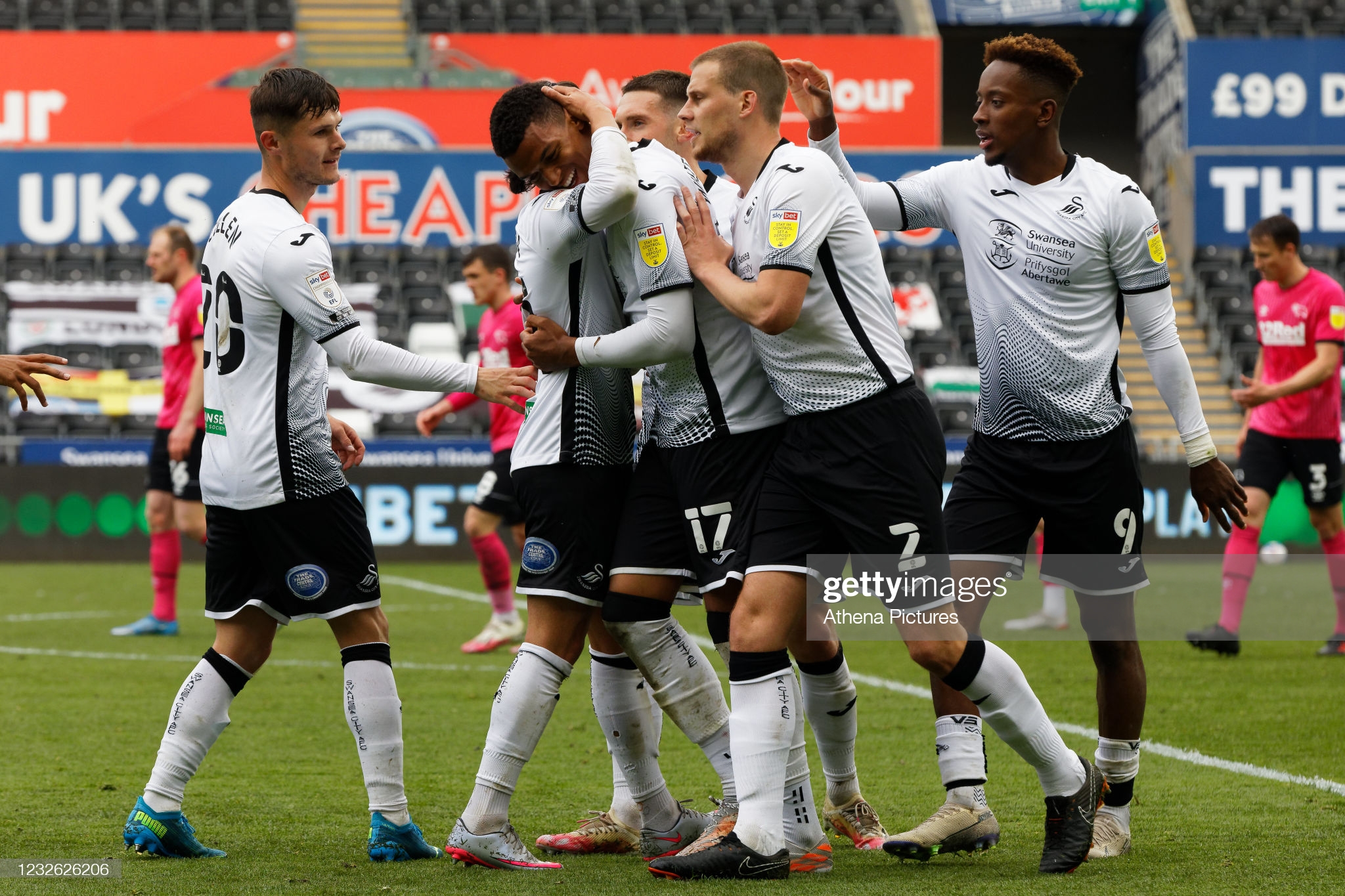 Steve Cooper insists has no preference over who or where Swansea City play in the promotion play-offs.

His team will meet either Bournemouth or Barnsley over two legs, with the weekend results ensuring the Swans cannot catch Brentford for third place or, realistically, fall from fourth to sixth unless Barnsley go on a double-figure goal spree on the final day or the Swans suffered a huge defeat at Watford.

That means it’s either the Cherries or the Tykes for Cooper’s team who gained a morale-boosting 2-1 win over relegation-threatened Derby County in their final home game of the regular season.

“I really don’t mind who we play or whether we are at home or away in the last leg,” said Cooper.

“The reason it shouldn’t matter to us is because it can lead to defeatist talk if the option you want doesn’t happen. We are a group that prides itself on overcoming obstacles, so whatever happens we will be ready.”

Tom Lawrence, the Welsh international, had given Derby a precious lead in the 48th minute but Wayne Rooney’s unreliable side then conceded two goals within three minutes just past the hour mark.

Former Derby striker Morgan Whittaker – a player allowed to leave by Rooney on deadline day – headed home the equaliser, before Connor Roberts’ thumping volley left the visitors with that familiar sinking feeling. They have won only once in their last 14 games.

For Cooper, it was a welcome return to form after three matches without a win, although the club are still desperate to restore their talismanic striker Andre Ayew to the team after a hamstring injury and also have a worry over key defender Mark Guehi who has a groin problem.

“What we wanted to do before the game was get as many points as we can,” he said. “If we finish third, fourth, fifth or sixth, we take that as it comes.

“We are not sitting here saying we want to play this team or that team, because when you qualify for the play-offs, you are a good team. Whoever we play, they are going to be difficult ties.

“We have got 80 points in a really tough season, with the circumstances that we have to work and play on.

“The lads deserve so much credit for it and I am really proud of them that they have done that. If we can get to 83 points, that’s impressive.

“I don’t think it was a great game, probably until they went 1-0 up, full respect for the position they’re in and I understand their approach to the game, but when that happens, a game can lack a bit of intensity and rhythm.

“Recently we’ve dropped too many points here. We’ve conceded some late goals of late, and it was good to see out the win.”

Neither Ayew nor Guehi featured against Derby and both may also be missing in the final day on the regular season away at Watford next week.

“They were not fit,” added Cooper.

“Marc has been managing a groin situation for a while now. He went away with England’s Under-21s. He didn’t even come back to Swansea, he went straight to Birmingham when we played on the Good Friday.

“It’s been a bit of a complex situation managing Marc.

“Andre wasn’t fit to start the game last week. With that 30 minutes, he just had a slight setback. Nothing to worry about and hopefully we’ll see them back on the grass at some stage this week.

“Whether they play against Watford I’m not too sure yet.”

England’s record goalscorer Wayne Rooney watched his side fall to their sixth straight loss, meaning their fight to stay in the Sky Bet Championship is now out of their hands.

The Rams must beat Sheffield Wednesday next weekend and hope Rotherham lose one of their two remaining matches if they are to avoid slipping into the third tier of English football for the first time in 35 years.

Derby were on course to beat the drop when Lawrence headed home two minutes into the second half, but two goals in two minutes from Whittaker and Roberts condemned them to another defeat.

“We leave ourselves with one game left of the season and we have to win,” Rooney said. “We’ll certainly see who the men are and see which players can stand up and be counted for the game on Saturday.

“I’ve never been in a last day battle to stay in the league, I know it’s my job to make sure the players are ready and that’s all I can focus on.

“The players will be ready, it’s a shoot-out between the three of us and we know if we win the game Sheffield Wednesday can’t go above us, then we have to hope Rotherham lose one of their games.

“We work hard to stop those goals, so it’s disappointing. Every time we seem to switch off, we seem to concede.

“The players are fighting for each other. There is no lack of fight or character. The players will be ready for next week. We know what we have to do to stay in this league.”