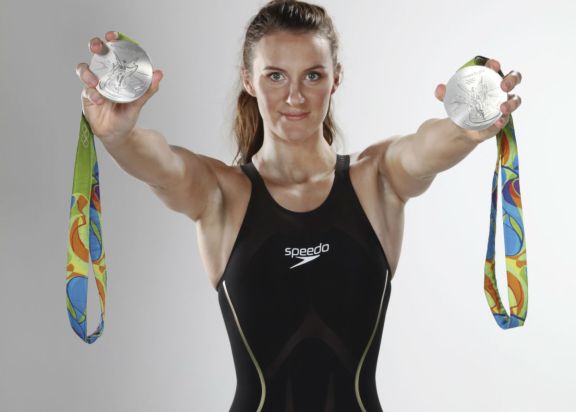 Just four short years ago relief was the overwhelming emotion for Jazz Carlin as she booked her spot for Rio 2016 in her final race at the British Olympic trials at Tollcross, Glasgow.

Although she had finished first in the 200m and 800m free, neither time had been inside the qualifying mark and it all came down to the 400m.

The pressure was almost intolerable as she lined up on 16 April 2016 but 4mins 04.33sJecs later and Carlin had made it, to bring to an end four years which had started with the Welsh swimming great almost walking away from the sport after glandular fever scuppered her chances of competing at London 2012.

There were European and Commonwealth titles plus world bronze but throughout those four years Rio had been the beacon at the forefront of her mind.

She would go on to win double silver in the 400 and 800 in Brazil but it was at Tollcross that the weight of the world was lifted from her shoulders.

Carlin posted on social media last week, four years to the day after punching her Rio ticket, and recalled the spectrum of emotions she experienced that week from her fears that she would once again miss out on the Olympics to “one of the most amazing feelings I’ve ever had and will never forget”.

It’s 4 years ago today that I qualified for the Rio Olympics and I still remember it like it was yesterday ❤️👇🏼 pic.twitter.com/V5yu3rfIRU

Now 29, Carlin told Swimming World: “It was actually one of the most stressful weeks of my life. I think just because I had built up to it for so long, after missing out on London as well, this was my dream.

“I’d been in a bad way most of the week but then made up for it by qualifying, getting the time on my last swim, my last race. A funny time to look back at, a bit crazy really.”

The British trials would have been taking place this week had it not been for the coronavirus (COVID-19) pandemic which forced the cancellation of sporting events across the world, the Olympics the biggest of them all as Tokyo 2020 became Tokyo 2021.

Carlin believes she would have found it hard had she been in that position back in 2016 but would have had no choice but to refocus.

“It would have been really difficult if it was four years ago for me thinking back to it.

“At least knowing that they’ve got time, they don’t have to try and rush back and they can keep things ticking over until they are allowed back in the pool. A really tricky situation but it will probably favour some people.

“I’d aimed for Rio for so long: it had been in  my mind since missing out on London but then I guess I would just have had to have dealt with it and reset and it would still have been the Olympics, still been something I really wanted to aim for so I think I would have just have reminded myself of that really.”

The immediate reaction of athletes to the Tokyo postponement varied although many appeared to quickly reset their goals.

Positivity is key for Carlin, who said: “In these kind of situations there is not much you can get out of dwelling on it and being negative about it.

“It is a champion’s mindset: I think you need to be able to accept, park it and move on and reset.

“Just being able to think ahead and think ‘oh I can now reset for next year, my goals still remain the same I am still as determined as ever to achieve it’.

“I think you’ve got to be able to tell yourself positive thoughts, you’ve got to build yourself up, if you dwell on it I don’t think that’s going to help you at all and it might bring you down even further.”

Carlin retired in February 2019 after a career that brought Olympic, world, European and Commonwealth medals.

Only 2008 Olympic champion Becky Adlington and 2019 world silver medallist Simona Quadarella have gone quicker in European waters over 800m than Carlin and her European title-winning time of 8:15.54 in 2014.

She has discovered a passion for cycling and works in a mentoring role with Swim Wales and has been sharing exercise demos on social media during the British lockdown along with co-star Poppy the cat as part of “Swim With Jazz”.

A little video to show you what Swim with Jazz is all about.

Carlin set up the initiative where she brings together a team of coaches and sports professionals to give support, training plans and practical advice to anyone at any stage of their swimming journey, regardless of age or ability.

She explains: “I wanted to be able to help people I guess and give people some of the support I didn’t really get in my swimming career from a young age.

“It’s only normally when you get to a certain level that you get that access so I just wanted to bring it down to people at any level really. It has been a long time in the making.

“I just wanted to bring together a world-class team of physios, nutritionists: a lot of people pull out of sport because they don’t have access to that support but I wanted to do it so anyone could have that access. That was the idea behind it.

“The idea is you have these events where all the team come together. You can see the physio and ask them about your shoulders and this and that, the nutritionists, the psychologists and ask about your confidence – all the things that come with being a professional athlete but so they can access it at any time.”