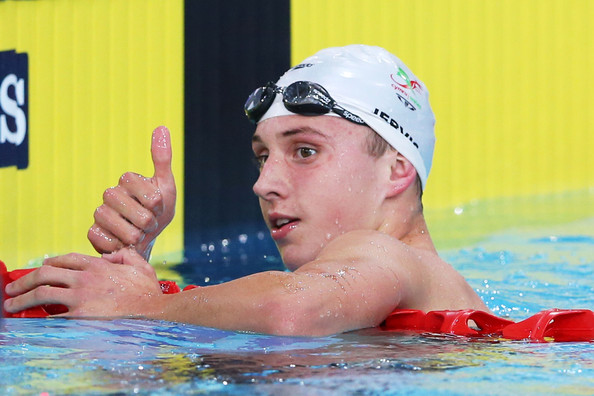 Daniel Jervis cut a frustrated figure after the opening session of the World Championships in Gwangju, South Korea.

The 23-year-old finished 17th in the 400m freestyle heats of which the top eight went straight to Sunday’s final, ruling Jervis out.

Alys Thomas also failed to make it through from her events, finishing 24th in the 100m butterfly in 59.24, 1.04secs outside her trials time.

Jervis’ time of 3mins 50.90secs was 3.33secs outside the personal best he swam en-route to victory and qualification to world titles at the British Championships in April.

He would still have had to eclipse that time by some margin to have reached the final but the Swansea Aquatics swimmer’s exasperation was clear.

Jervis said: “It was a good swim but a little bit disappointed. You’ve just got to keep your head high. I’m not swimming now until the last but one day, the 1500, that’s the one I want to perform in.”

Jervis finished eighth in the same heat as eventual winner Sun Yang, the Chinese athlete whose presence is looming large in Gwangju following months of furore after details of an incident in which his blood sample was smashed by a hammer were revealed.

The Chinese athlete has a vocal band of followers in South Korea whose cheers and screams are of the sort more often reserved for pop stars and celebrities.

Jervis felt their behaviour went beyond acceptable, saying: “Just loud and disrespectful I think to the athletes in my race.

“Obviously they know the one swimmer that was in the race with me and everyone else in the race had to go through it as well.

“But I think its disrespectful you have to get up on the block, get back off, up and then back off again because they were so loud.”

Jervis can now turn his attention to the 1,500m in which he rattled David Davies’ British record in April.

“My biggest issue is when I get to these competitions I freak,” he said. “I am so ready for Brutish Champs and everything: at British Champs it is so much different competing when you know you are going to win and then racing against people like you know – the big dogs in the pool.

“Sun Yang being one of them, fair play to the guy, he’s an incredible swimmer.

“It’ll be good to get back and focus on the 1500. I’ve got to forget about that race. Now I’ve done that tough swim I have got to look at all the other athletes in the world at past competitions who struggled on the first day and then come back to absolutely smash it in the final stages of the competition.

“That’s what I’m going to do: that’s why I’m training this hard, to make the final in the 1500. I had no pressure in that race, I wasn’t expected to make the final, but I just put a little bit of pressure on myself.”