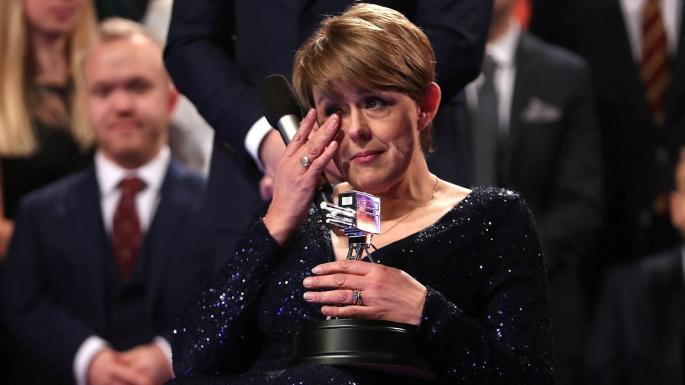 A tearful Tanni after receiving her award.

Tanni Grey-Thompson has added to her huge collection of medals and trophies by winning a lifetime achievement award at the BBC Sports Personality of the Year night.

She claimed victory in the London Wheelchair Marathon in 1992, the first of six wins over her career. She went on to compete at the Barcelona Paralympics where she won four gold medals in the 100m, 200m, 400m and 800 metres and a silver in the 4x100m relay.

Her final Paralympic Games in Athens 2004 saw her take gold in the 100m and 400m. Following her retirement she has remained heavily involved in sport, working on the board of the London Marathon and the SportsAid Foundation.

Ben Stokes was crowned BBC Sports Personality of the Year 2019 by public vote in front of an arena of 10,000 and millions more tuning in from home.

The 28-year-old held his nerve as England triumphed in a Super Over to win the Cricket World Cup in July, and just over a month later his glorious unbeaten 135 at Headingley won the third Ashes Test for England.

Stokes’ sizzling summer had made him the overwhelming bookmakers’ favourite for this award, and the public vote saw him finish ahead of Lewis Hamilton and Dina Asher-Smith at the event in Aberdeen on Sunday night.

“Obviously it’s an individual award but I play in a team sport and the best thing about that is you get to share special moments with team-mates, backroom staff and management who make days like we had in the summer possible.

“I’m up here receiving this award but without the efforts you put in this summer, I wouldn’t be up here doing that. So thank you so much.”

It is a story of redemption for Stokes, who in 2018 was cleared of affray charges following an incident outside a Bristol nightclub in September of the previous year.

Stokes and his fellow World Cup winners were named Team of the Year while the moment the trophy was secured claimed the Greatest Sporting Moment of the Year award.