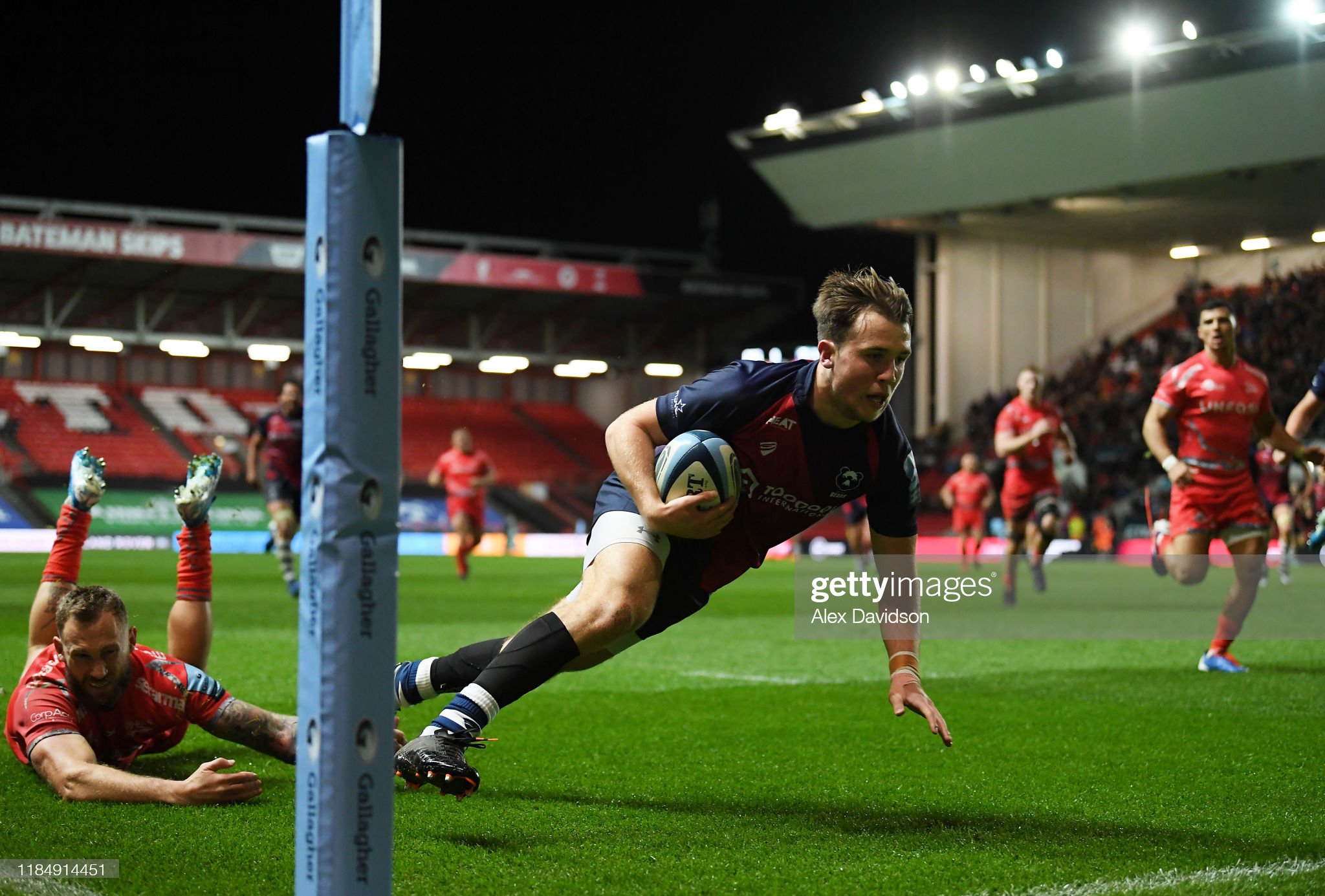 Ioan Lloyd is the latest in a long line of players who have graduated to professional rugby from Ysgol Gyfun Gymraeg Glantaf in Cardiff. The Wales Under 20 star has recently been making a name for himself with Pat Lam’s Bristol Bears and is widely acknowledged as one of the brightest young prospects in the Gallagher Premiership, but there’s a lot more to come as he tells Alex Bywater.

But the 19-year-old has a chance to get one over a fellow old boy later this month, when former Wales centre Roberts lines up for the Dragons in their quarter-final visit to Bristol in the European Challenge Cup.

“We’ve got the quarter-finals of the Challenge Cup to look forward to as well and there is a huge buzz around the training centre at the moment,” says Lloyd.

“All the boys are buzzing for the opportunities and games coming up, which give us the chance to put ourselves in the best position to make a Premiership semi-final and, hopefully, progress in Europe.

“Obviously, we’d like to win both and everyone is excited about that being our target. Regardless of who is involved everyone in training everyone is trying to help us reach that goal.”

Having played for the Cardiff School and Blues South U16, Lloyd was due to graduate into the Blues U18 squad, but then got an offer to go on a sporting scholarship to Clifton College. It was simply too good an opportunity to turn down.

There was also the added attraction of playing alongside former All Blacks superstar Charles Piutau.

He adds: “In my mind, I thought that if I was going to go to Clifton I wanted to give it a full shot rather than keep going back and forth. I was lucky my teacher at Clifton, Matt Salter, linked into Bristol so he helped me get involved in the club,” he added.

“It was definitely not an easy decision and I went back and forth in my mind over whether I should stay or leave. Obviously, I’m very happy now with the decision I made.

“I was 16 at the time, so I wasn’t going to get ahead of myself, and there is no way I thought I’d be getting the opportunities I am at the moment. It was an opportunity which came up and I was very lucky to get it.

“Growing up, and going to such a big rugby school with a great rugby culture, I looked at players like Jamie Roberts and Rhys Patchell – they were massive inspirations for me. I was lucky in that in my first game for Bristol this year against Bath I came on at the same time as Jamie.

“It was a double-whammy of getting on the pitch for my first Premiership game, which was nuts, and at the same time I was coming on to face one of my heroes. It was a crazy experience meeting him on the touchline and we had a bit of a chat, although I doubt he knew who I was.”

“I remember watching Charles Piutau playing at the Arms Park against the Blues when he as in the PRO14. There are a few other players I grew up watching who are now my team-mates.

“I watched Charles and Steven Luatua play for the All Blacks and I also remember seeing John Afoa play when I was growing up. It’s a surreal feeling every day at training and I still have to pinch myself.

“I’m not sure that will ever change. Charles is one of the best players in the world and it’s really rare to meet someone like that.

“It’s a very strange, but amazing, feeling to go into training and speak with him and learn how he does everything. I recently got to train at full-back for the day and he was behind me the whole time talking me through what I should be doing.

“Just getting his appraisal on everything means so much. I’m really enjoying my time at the Bears and it’s a great environment to be in.”

Striking major silverware before he leaves his teens would be a fantastic achievement for Lloyd, but he also wants to go further in the game. Having tasted international rugby at age-grade level he wants to go all the way.

If so, he is going to have to decide in which position he is going to push himself. Equally at home at full back or outside half, he certainly has a preference.

“Playing at No 10 is where I’ve always played and feel the most comfortable. I’m still learning both in that position and in the full-back role,” he added.

Statement. Made.@BristolBears are off to a flyer as they ran out 43-16 winners over Bath playing some fantastic expansive rugby 🔥

A sold-out Ashton Gate absolutely loving it as 18-year-old Ioan Lloyd got in on the act! pic.twitter.com/WLoBtBOdNa

“I loved Gavin Henson and James Hook when I was growing up and more recently I’ve looked up to Dan Biggar. They are all outside halves, but I like Liam Williams as well.

“Full back is a completely different position, but I do enjoy playing everywhere and just love getting out on the pitch. Wherever that is for Bristol makes me happy, but outside half is where I feel most comfortable.

“It’s definitely my long-term goal to try to play for Wales, but at the moment it’s a long way off. I’m just focusing on trying to get starts in the Premiership for Bristol and to play more regularly.

“That’s my focus at the moment and for the moment I’m not worried about anything outside of Bristol.”