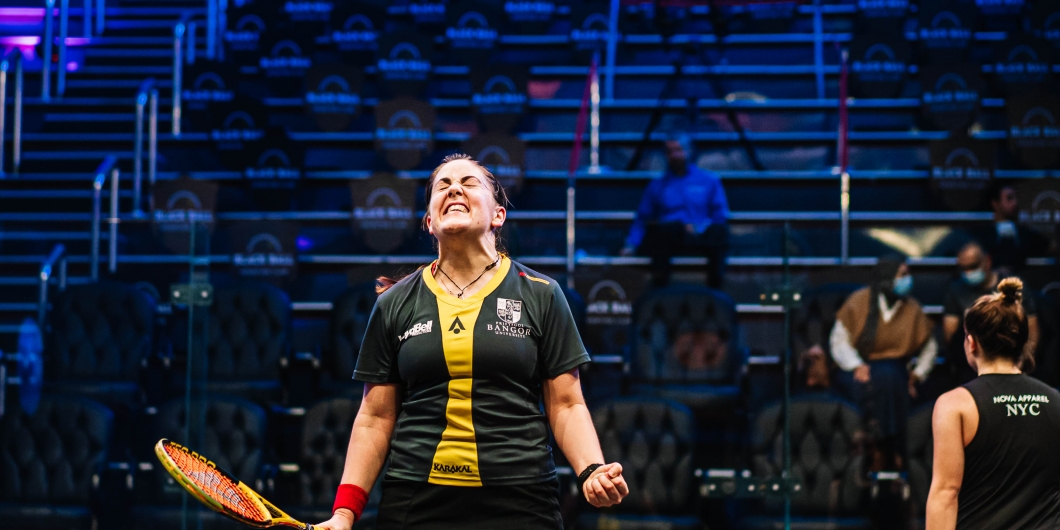 Tesni Evans missed much of last season with injury but showed she is getting back to her best against Olivia Clyne of the USA.

Tesni Evans is confident she is getting back to her best after booking her place in the quarter-finals of the CIB Black Ball Open in Cairo.

The last time the pair met, at the Tournament of Champions in New York in January, Evans hobbled off the court after 17 minutes with ankle injury that ended her season.

“I think the first two games, it was probably the best squash since I have been injured,” said the 28-year-old from St Asaph.

“So I was overly happy and Liv is too good for that. She played some unbelievable shots and she went for it for two games.

“I should have kept up with it more because she is a quality player. The last time, I only lasted 17 minutes against her because I got injured so I am happy I got the win but she is tough to play, that’s for sure!”

World No 9 Evans, who did not make her comeback until September with squash also suspended due to COVID-19, won a tight first game on the tie-break.

The Cardiff-born player took the second more comfortable before the American, ranked four places below her in the world, reeled off successive games to set-up a decider.

Evans, in only her fourth tournament since her return, took the first six points of a final game she dominated, taking it 11-7 after Clyne saved one match ball.

“Counter that and get on my toes and get up the court. She was getting so many opportunities off me. More than anything, it was mental. I needed to be a bit more positive and I had to leave it all out there today.

“There are so many things, the girls are playing some unbelievable squash and I need to catch up so for me, I just want to give it everything and see where I am at. I will always leave everything I have on the court.

“I just want to get better and that’s all I can do!”