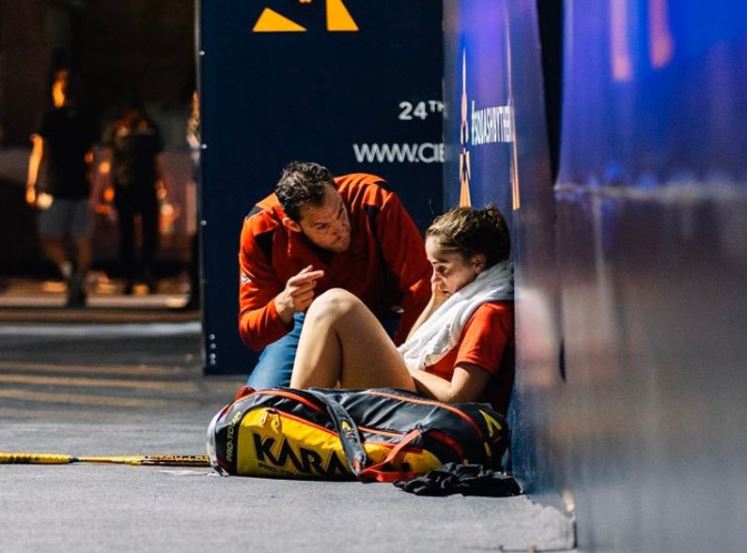 David Evans, here in his role of coach with Tesni Evans, was the only other Welsh player to reach the PSA World Tour finals.

Tesni Evans will return from Egypt and the world championships with renewed belief she can continue her progress up the global rankings of women’s squash.

Wales’ world number nine went out in the last 16 of the PSA Women’s World Championships in Cairo at the weekend, when she was beaten by England’s world number seven, Sarah-Jane Perry.

It was a successful revenge mission for Perry who had lost to Evans in three of their last four meetings, but Wales’ Commonwealth Games medallist is confident that a new fitness regime – for mind and body – can enable her to further adjust to the demands of being in the world’s top 10.

“I was completely outplayed in the match and always on the back foot,” was Evans’ honest assessment of the game. “But it was a great experience getting to play on that court for the first time.”

The Bangor University-based athlete was back in Cardiff in the middle of October to play for the Welsh Wizards, Wales only Premier Squash League team.

She beat Joelle King – the world number six and Commonwealth Games gold medal winner last year – as the Wizards started their home campaign with a 4-1 victory over St. George’s.

“I worked really hard over the summer on certain things that I felt I was lacking last season,” says Evans.

“It was mainly off the court stuff – my physicality, for instance. I put a big concentration on that and worked hard.

“I wanted to be physically stronger. At the back end of last season, I wasn’t always feeling amazing and fresh.”

But she also worked on her mind – how to stay level-headed in an individualist sport where she often has to travel the world alone and there are no teammates to lift her after a poor performance or setback.

“The mental side is also really huge. I used to be really up and down and that was difficult to cope with. But I’ve worked hard with my psychologist to try and level out my feelings, to not get so up or down.

“I don’t want to be too excited that I’m not relaxed, or too down about things. It’s about finding that middle ground, which isn’t always easy.

“I’m lucky to say I’ve never really suffered from mental health problems that can come from the sport, but I can completely see how it happens.

“We train every day in a career where we really want to achieve the most we can. When it doesn’t work out, that can be really hard to take. You put so much effort and things don’t work out, it can be easy to get really down.

“So, it’s important to keep a clear head and have people around you that you trust and can easily talk to.

“I find that it is really important after I’ve played that I talk with someone. I don’t want to get too down over a loss, or too over-excited by a win. Keeping on that even keel has a massive part to play in any sport.”

Before making her season debut for the Wizards – who are next in action in Cardiff on November 26 against Coolhurst – Evans was in the USA where she reached the last eight of the US Open in September.

Quarter-finals are now the minimum requirement for Evans at most worldwide tournaments if she is to play to her ranking or above – a fact that has brought added pressures as well as the satisfaction of making that top 10 breakthrough.

“When you get into the top 10, there is a whole new pressure of expectation. That can be really hard when you go to a tournament and you have this new status. It can bring extra stress before you’ve even got on the court.

“When you scrape into a draw and no-one expects anything of you, it’s still fun. You feel that even if the player is better than you, you can just be free to give it a really good go.

“But now, I know that other players are feeling that about me. You have to adjust. There is always another level to get to and you have to work on those fine margins in order to look forward and improve.”