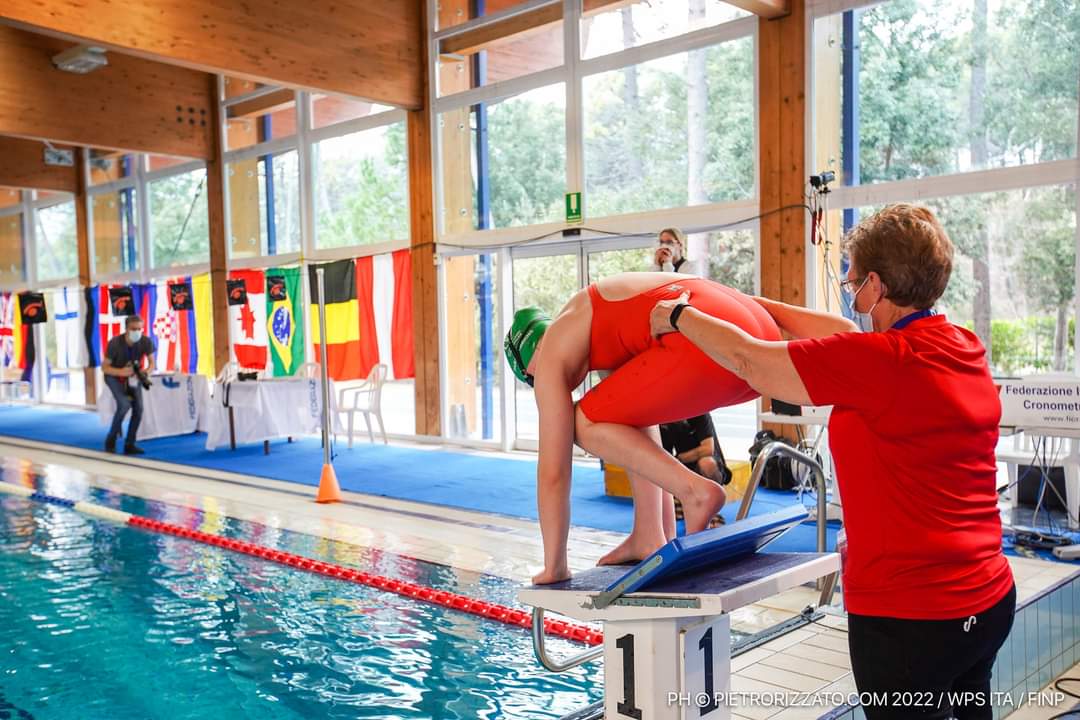 Lily Rice in action in the pool. Pic: Swim Wales.

Welsh world champion Lily Rice has switched sports and will make her Commonwealth Games debut in para swimming in Birmingham later this year.

Rice – the 18-year-old renowned for her wheelchair backflips – is already a world champion in women’s wheelchair motorcross.

But now she is poised to represent Wales in para swimming as part of a four-athlete squad who will compete at the Games in July.

Each of the four swimmers had to rank in the top eight in the world for their event and class to seal qualification for the Games.

Rice, who swam regularly as a youngster before competing in wheelchair motorcross and now swims for the Pembrokeshire County club, will race in the 100m backstroke S8.

Torfaen Dolphins will be represented by Broom and Willis, who will compete in the 200m Freestyle S14 and 200m individual medley SM10 events respectively.

Rice, from Tenby, has defied the odds to reach her first Commonwealth Games after only returning to competitive swimming seven months ago following a lengthy hiatus.

Rice lives with hereditary spastic paraplegia which affects her lower limbs, and has used a wheelchair since the age of 10.

After winning the WCMX World Championship and becoming the first female in Europe to complete a backflip in a wheelchair, she now has her sights set on success in the pool at Birmingham.

She said: “It’s really exciting, especially as I haven’t been swimming competitively for that long since coming back.

“To have an opportunity like this is amazing. I swam when I was younger at some of the British junior international meets but I took a big break with the WCMX and came back into it in October last year.”

“The Olympics and Paralympics last summer really inspired me to get back into it. When I saw the people I had competed against previously swimming at that level, it made me want to come back even more.

“It’s definitely exciting to push myself and see what I can do at the Games. I’d love to go sub-1:20:00, but I’m working hard in training and we’ll see if that pays off.”

The para swimmers will be in action across six days of swimming, from July 29th through to August 3rd.

But after conversations with his coaches and a British Swimming sports psychologist, he is back to his best and ready to take on the world this summer.

He said: “The way I found out was pretty interesting. My coach Ian knew, and we were out on a boys’ squad day out paintballing. As we were coming back home, he called me over in Newport and he told me there and then, and I broke into tears on the side of Malpas Road.

“At the start of this year I was considering quitting swimming. I wasn’t making any progress or improvements to my times. I think it was a mental block, physically I was fine but mentally I couldn’t get there.

“There was a couple of things that changed that for me. British Swimming got me talking to a sports psychologist. I had a really good chat with my other coach Tom as well and that really made a difference.

“It’s amazing to be representing Wales, this will be the biggest event I’ve ever competed at. It’s a home games, my brother and all my family will be there and even my friends bought tickets which I was surprised about because they’re so expensive! I’m going to have to perform for them now.”

Cwmbran swimmer Willis is the youngest of the quartet at just 14 years-old. The SM10 athlete, who was born without a right hand and partial forearm, has recently won youth gold medals at Para Swimming World Series events in Aberdeen and Italy to earn a nomination for the Disability Sport Wales Emerging Athlete of the Year Award.

She said: “It was a real shock when I found out, we were having a nose at everyone else’s times and I wasn’t sure whether I’d get in as the last qualifier or not.

“In my head, I’d told myself that it was fine if I didn’t make it, I would always be able to have another shot.

“So when I found out it was a bit of a shock and it took a while to settle in. I think it was the next day when I realised I was actually going! It was quite surreal.

“I get more excited than nervous; I try to stay as cool as a cucumber. When the build-up starts to get more intense the nerves might start to come in, but I’m just keeping happy and excited for now.”

Lewis, from Church Village, will compete in the SM10 200 Individual Medley event alongside teammate and friend Willis.

Lewis, who has mild hemiplegia cerebral palsy on her left side, underwent hydrotherapy as a young child and discovered an ability to swim.

She said: “It’s an honour to be able to represent your country, I come from a family of proud Welsh people. I’m really excited but I am a bit nervous for Birmingham.

“I think my mum and my sister will be up there supporting me, they’re my biggest fans. Everyone’s been asking me if I know if I’m going so I can’t wait to finally tell them.

“I had to do hydrotherapy when I was younger and that’s how I discovered I was a strong swimmer. I started lessons at five, joined Pontypridd SC at nine then moved to RCT when I was 10 or 11.

“I have mild hemiplegia cerebral palsy on my left side which affects the strength of my whole left side. Swimming has always been a release for me, I love being in the water no matter where I am.”