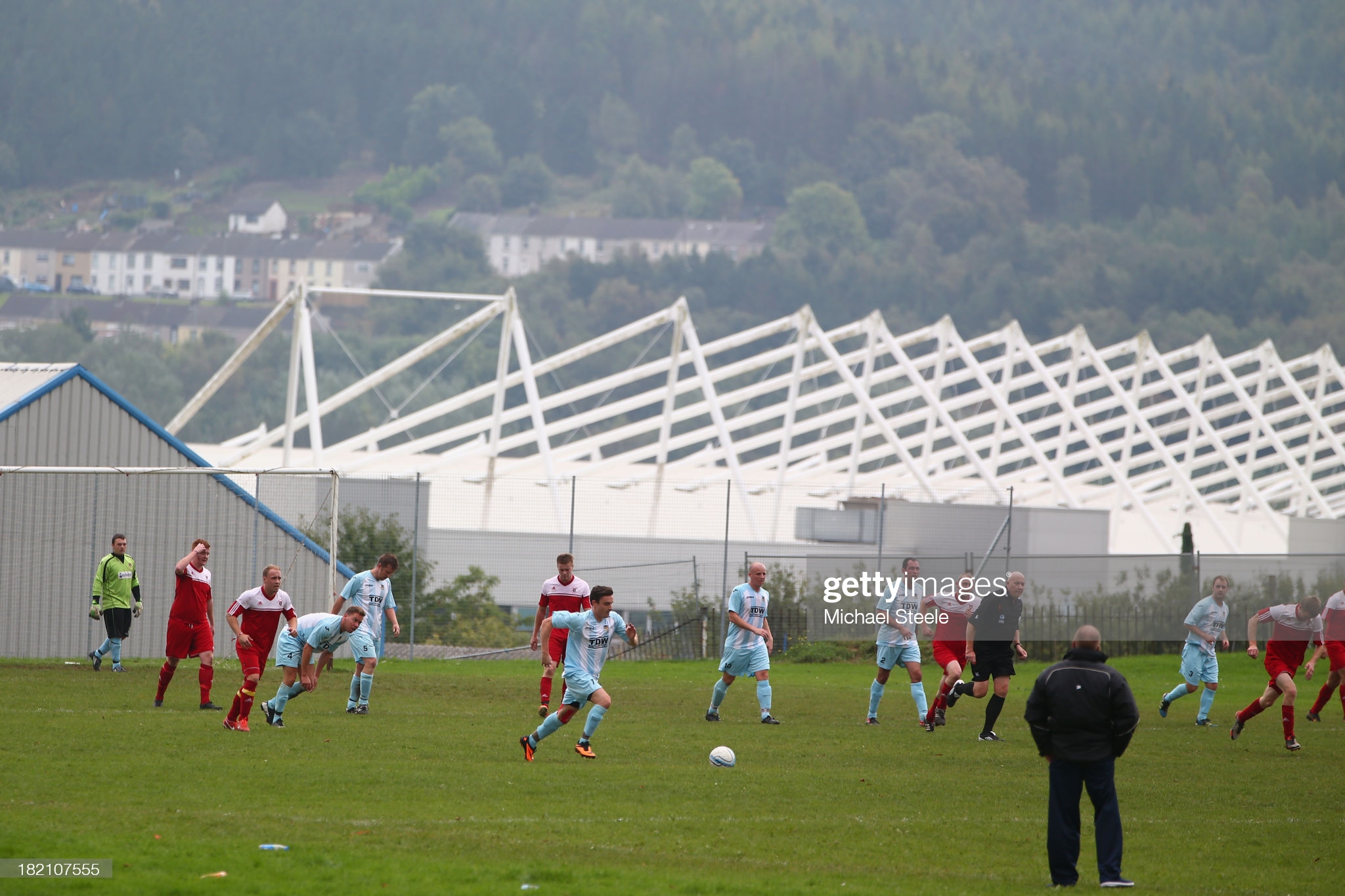 A local league game goes ahead in Swansea in the shadow of the Liberty Stadium. Pic: Getty Images.

The end of the year is often a time for taking stock, for looking back and maybe offering a pat on the back to those who have done well. More unusual is for a sport to pat itself on the back. Fraser Watson says the conceit of Welsh football leaders over 2020 is misplaced and likely to offend many in the grass roots.

As glowing self-appraisals go, this was one that gravely misjudged its audience.

The post-Christmas claim of the FAW Trust that, “we’ve proved what we can achieve if we all work together” stirred some serious reaction amongst amateur footballers and clubs in Wales.

To say the majority of it was unfavourable would be a ludicrous understatement.

The line – posted above a press release on the sea of equity that is Twitter – was meant to relate to children’s football.

Such is the feeling of resentment at grassroots level towards national authorities, however, that anger from those involved at youth and senior levels in the sport aggressively spilled out.

There is, of course, context behind a nine-month period that many feel has left the amateur game in Wales hanging by a thread.

Since March, the FAW have been hit by an unprecedented situation, which temporarily rendered the very notion of football futile.

Getting children playing football in 2020 has been a massive challenge but we’ve certainly proved what we can achieve if we all work together. #MoreThanAGame | #TogetherStronger https://t.co/MAEVHnLuDN

Authorities should always be braced to deal with multiple scenarios, but functioning effectively amidst a global pandemic isn’t one anyone can meticulously plan for.

Hence, why the original postponement of the game in Wales at all levels was met with widespread understanding.

But it’s been the attempt – or lack of it – to help amateur clubs safely emerge from the doldrums that has converted that understanding into universal frustration.

For all those below the JD Cymru Premier, the competitive action has been curtailed and yet the COMET fees – a membership registration system operated online – have not.

This summer, clubs were still required to part with thousands of pounds in membership payments in order to keep their affiliation to their respective leagues.

Whilst a small percentage of those payments covered club insurance, there was no offer of a pay freeze or potential reduction for a campaign that was never going to be played to its full capacity.

An explanation as to why, or whether struggling sides will be allowed to have their payments rolled over should no meaningful action take place this season, has not been forthcoming.

The phased “return to play” protocols did belatedly allow for a brief window for junior and then senior friendly matches to take place – albeit with a maximum of 30 personnel. That effectively allowed for one substitute per team, once officials and coaches were taken into account.

Regardless, that window was promptly slammed shut as a second wave of Covid-19 swept throughout Wales.

Given current lockdown restrictions, there appears little chance of it being re-opened again anytime soon.

But throughout a common theme has emerged – complaints from grassroots clubs and local football league organisers about a lack of communication or response from those in charge.

The manner in which football has, until now, continued at the other end of the scale in Wales has been welcomed by some, resented by others.

The Cymru Premier division got going again in mid-September and sure enough, opening up all football in Wales in one mass swoop was inconceivable. A phased return was ultimately necessary – it’s just phase two never really materialized.

JD Cymru South and North clubs, many who have had to upgrade facilities to meet the criteria needed to play at that level, have the capacity to safely host matches and yet have not been deemed elite enough to get going.

2020 a year never to forget for all involved at @the_nomads being crowned @CymruLeagues Champions and competing in the @ChampionsLeague for the first time in the clubs history. Privilege to be part of the journey and the amazing team and staff. Onwards to 2021 together. #oneclub pic.twitter.com/iJAWCzyHCZ

Indeed, the use of the term “elite”, carelessly banded around by the Welsh Assembly Government when it originally looked to open up sport in certain sectors, has not helped matters.

With the exception of The New Saints and Connah’s Quay Nomads, the top flight in Wales is made up of semi-professional clubs.

To brand it with a term usually reserved for the Christiano Ronaldo and Lionel Messi figures in our game has only served to heighten the “us and them” mentality currently adopted by many in the amateur game.

Out of the many aggressive responses to Sunday’s ill-advised tweet, accusations of the FAW only caring about the elite was among the more consistent themes.

So no, now is not the time for that same FAW to be publicly reciting self-appraisal for its work at grassroots level in 2020.

It’s a time to acknowledge that it’s been a difficult year.

It’s a time to acknowledge mistakes have been made, dating right back to the ridiculous delay clubs endured in finding out when their respective leagues would be decided when the 2019/20 season was curtailed.

It’s a time to acknowledge that better communication with clubs is needed moving forward.

It’s time for transparency as to where COMET fees have gone, and whether or not they’ll be returned.

Difficult days still lie ahead, regardless. For all the positive hysteria surrounding the Covid-19 vaccines, the notion of football at every age group level of the game going ahead on a Saturday afternoon across Wales remains a distant one.

But clubs should not be charged for non-activity. And they should be provided with clarity as to what circumstances will allow them to partake in the game they love at a competitive level again.

But the fear is many players, coaches, and volunteers at grassroots level have already drifted away in bewilderment – and more will follow.

In one sense, the FAW was right, a lot can be achieved if we all work together.

It’s time for them to practice what they preach at grassroots level, before a disrupted generation becomes a lost one.