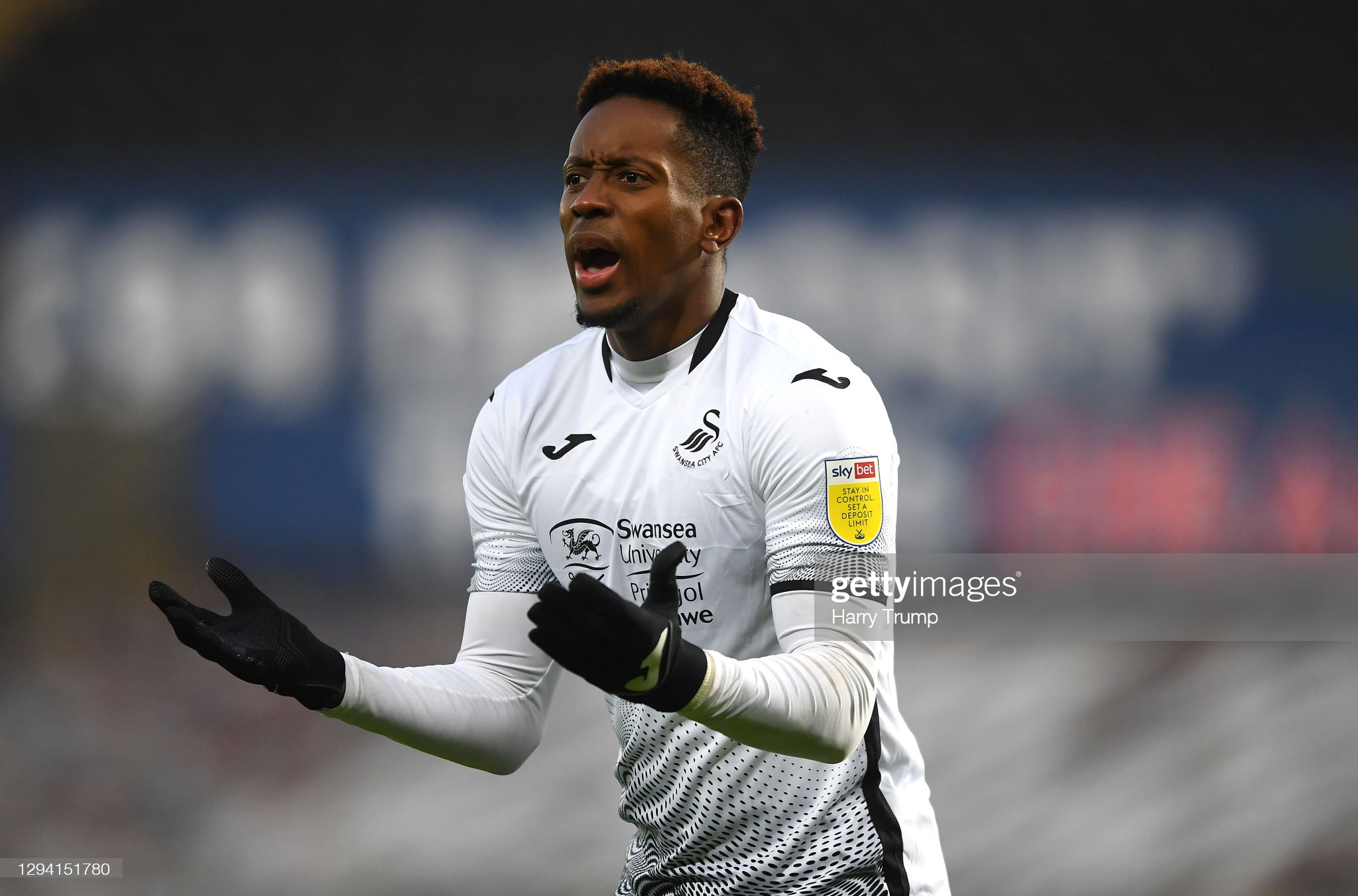 Jamal Lowe calls Andre Ayew “The King” at Swansea City, but insists the club’s African royalty has no hang-ups over who is wearing the scoring crown.

Of the two strikers, it is indisputably Lowe who is the monarch of the penalty box at present with six goals in his last six matches.

In the same period, Ayew has scored just once – in the away victory at QPR – but Lowe reckons defences like Barnsley’s, who the Swans face on Saturday – would be ill-advised to concentrate on just one or other of the pair who have scored 18 goals between them so far this season (eight for Lowe and 10 for Ayew).

“It doesn’t matter who’s scoring so long as we are winning,” says Lowe.

“It comes from the back. I think we’ve got the most clean sheets in the league. You hear people say ‘Swansea don’t blow anyone away – they only win by one goal’ but if we win, we win.

“It’s not who scores the most, it’s who has got the most points so we don’t really care. Our success is based off clean sheets, conceding very little, and we know we’ve got the players to create chances.”

“Andre, like everyone, is just happy if we win. If he scores the goals and we win, I’m happy. If I score and we win, he’s happy. As long as we play well and we win everyone is happy and we can hold our heads high.”

Lowe’s scoring streak is proof of the accuracy of head coach Steve Cooper’s hunch that the 26-year-old former Wigan winger would be better used as a central striker, even though he had not played in that position regularly since he was 12 years old.

The Swans paid out what now appears a bargain £800,000 to bring Lowe to the Liberty Stadium last summer, with the preconceived plan of converting him from a wide player to a more orthodox striker.

“He (Cooper) told me he had a vision and he saw me as a striker. With the style of football we play it’s not all long balls like some teams who need a 6”5 striker.

“Andre is not 6”5 and neither am I. With the style of football we play you don’t have to be the traditional striker and that helps me as do the players we have around.”

“Obviously, it’s a change. With a different role, you have different jobs to do, your back is to goal a lot more. I’m also trying to change my mindset and adapt as the games go by.

Jamal Lowe said if he scored against Ben Foster he wanted to make it on to his YouTube channel, all in the plan 😂😂 pic.twitter.com/qBAiZcwLeS

“I’ve got the king (Ayew) next to me who is obviously a top striker and has been for years.

“He’s a big player and I watch, train and speak with him every day. He helps me and I do a lot of video work with the gaffer and Marshy (assistant coach Mike Marsh).

“It’s also out and out training. We do a lot of work in our shape and it’s just practicing where to move. If I make a mistake or go in the wrong place, I soon find out the ball is not going there. You get to learn the players, the position, and the role.

“It took a while to start with, that’s the truth. It’s taken a lot of time on the training ground and in the video room watching clips and learning which way to move.

“It’s a big change. Playing on the wing is a lot different to playing up front where you have your back to goal and are making different runs and different movements.

“You’re playing against predominantly the most physical players in the centre backs. Normally I’m playing against the right back or left back who are a little bit smaller or weaker.

“I might be able to dominate them, but I definitely can’t dominate a lot of the centre backs in the league. It’s about trying to learn how to use your strengths against them.”

Lowe’s goals have helped the Swans climb to second in the Championship, a position which was consolidated in midweek when third-placed Bournemouth were held to a draw by Millwall.

At the precise midway point of the season, the club have amassed 43 points. If they collect the same tally in the second half of the campaign, and finish with 86 points, that would be 16 more than they managed last season.

It would also be three more than West Bromwich Albion achieved last season in finishing second and gaining automatic promotion to the Premier League.

“Our mindset is to win and not just to stay in the top six and see how it goes, but to push for the top two,” added Lowe.

“Offside, piss off” was my highlight. Unreal feeling as a keeper being let off like that

Jamal Lowe CELEBRATED In-Front Of My GoPro vs Swansea City | Away Days |… https://t.co/RV4stslPK0 via @YouTube @BenFoster

“That’s been our mindset from day one, it’s what the gaffer told me, and it’s inside everyone here.

“I can’t say I’m surprised, where we are although I don’t mean to sound cocky. The players we have are good players.

“They were in the play-offs last year and that wasn’t by fluke. This year it’s about hopefully going one step better, getting in the top two, and staying there.

“It’s not like when Leicester won the league and everyone was surprised.”

One thought on “The King And I . . . Swansea City’s Jamal Lowe On Playing Alongside Andre Ayew”