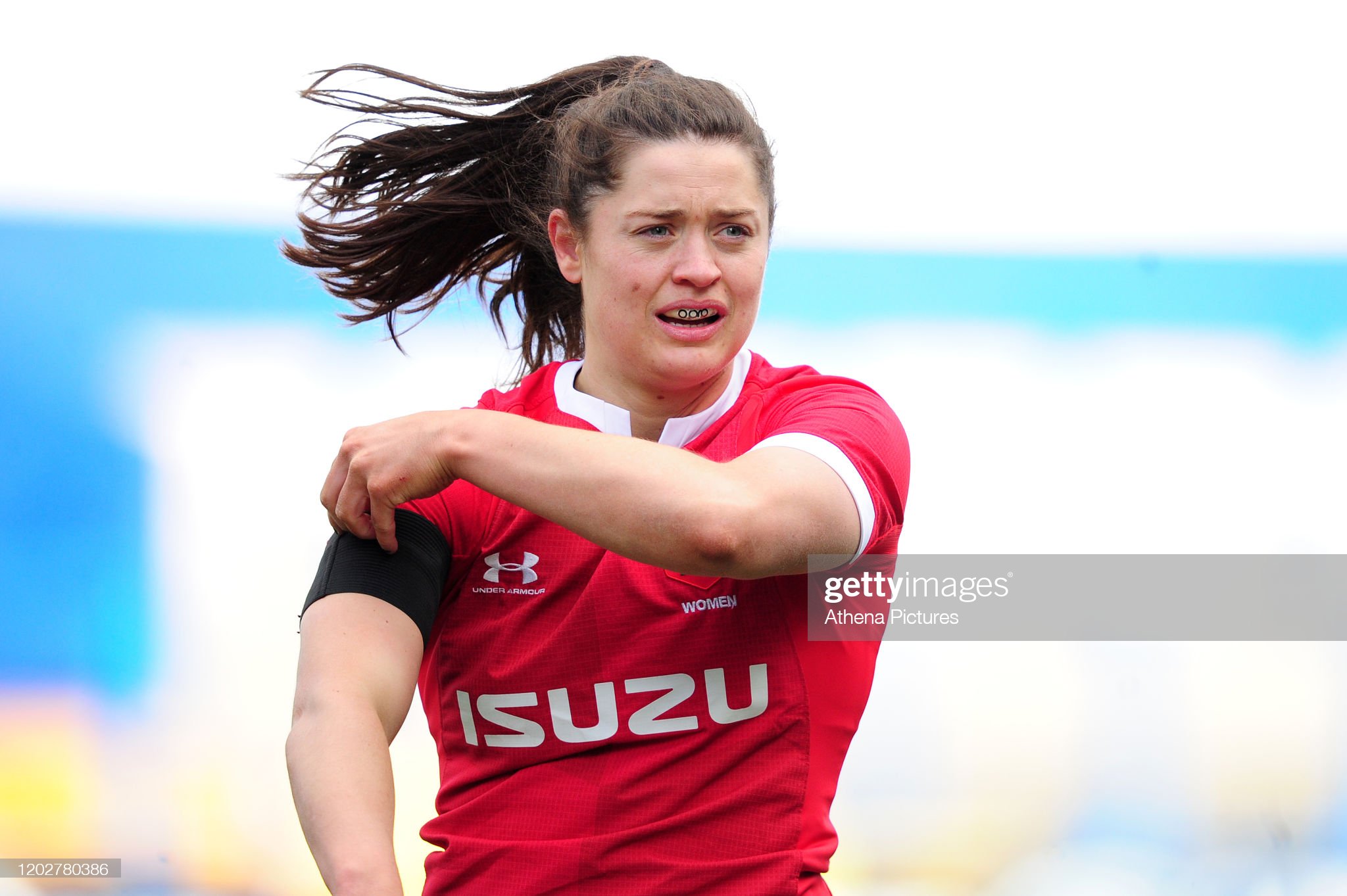 CARDIFF, WALES - FEBRUARY 23: Robyn Wilkins of Wales during the Womens Six Nations Championship Round 3 match between Wales and France at the Cardiff Arms Park on February 23, 2020 in Cardiff, Wales. (Photo by Athena Pictures/Getty Images)

Robyn Wilkins admits she has felt more than a little jealous of her own Wales teammates as she prepares to face France on Friday night.

The Gloucester player – who has been switched from outside-half to centre for the fourth round of the TikTok Women’s Six Nations tournament – is now a rarity among the starting XV.

Unless most of her teammates who will run out at Cardiff Arms Park, in a match that is live on S4C, Wilkins has no contract with the Welsh Rugby Union.

The early weeks of Wales’ campaign may have underlined the long overdue necessity of full-time and part time professional deals, but Wilkins – who is a science teacher at Bassaleg Comprehensive school – has neither.

Here's your Wales team to face France back at Cardiff Arms Park in our fourth round fixture of the #TikTokW6N.

➥ Wales are refreshed and ready to host France back at home this Friday. #HerStory

“I was in talks about a retainer contract as I am a teacher,” says the 27-year-old, who will win her 59th cap.

“I was hoping to combine the two and juggle a retainer contract, but I was unable to do that. Ideally, I would have loved to have taken a retainer contact. I am very envious of the other girls.

“But even though I couldn’t take it this year, hopefully there will be opportunities in the future. I still like to think I am young enough at the grand old age of 27 to take one potentially in the future.

“For now, I am focused on the Six Nations and then the World Cup and then hopefully another opportunity for a contract will come.”

Absolutely fantastic to see that the WRU have offered contracts to the women's team.

That is quite literally a game changer.

In every sense of the word.

The WRU announced in November that 12 players would receive full time professional contracts and a further nine players would be offered retainer deals.

Her teaching commitments meant that Wilkins – the daughter of former Wales and Bridgend wing Gwilym Wilkins – was currently unable to sign up, but she is grateful to the support her school has provided.

Balancing her time between teaching and playing sport for her country is no easy task and requires Wilkins to prioritise.

“I have to be really organised. I have been very lucky with my school, obviously I wasn’t able to take a retainer, but they have allowed me opportunities to go and play for my country.

“They are supportive if I have to go training with Gloucester, letting me miss a meeting once in a while or now with the Six Nations I might need to miss a Friday.

“It has been stressful at this point in time, with the lack of teachers out there, the demands within the job have been really difficult to manage.”

Wilkins made her international debut back in 2014 and is one of Wales’ most experienced and influential players.

She came off the bench in the wins against Ireland and Scotland at the start of the campaign and was picked at No.10 against England, a match Wales lost 58-5.

The defeat has led to five changes being made by head coach Ioan Cunningham, including switching Wilkins to inside centre.

Whatever happens – win, lose or draw against the French – she knows her biggest supporters and her most honest inquisitors will be there when she opens the classroom door on Monday morning.

“I am lucky they like their rugby at Bassaleg. The kids will be the first port of call the day after the game on whether things have gone well or not. They are really supportive, always asking questions, they do love to grill me!

“I think the awareness has always been there but outside of school the awareness is a lot bigger now, especially with the Six Nations being at a different time to the men’s. TikTok becoming involved has also had a massive impact and has skyrocketed the sport.”

🏉 The TikTok Women’s Six Nations is showing no signs of slowing down. Bring on the weekend for round 4! pic.twitter.com/wOThxVhol3

Wales have enjoyed an excellent Six Nations campaign so far, beating both Ireland 27-19 and Scotland 24-19 before losing to the world number one side, England.

France have won all three of their games so far, beating Italy 39-6, Ireland 40-5, and Scotland 28-8. The visitors have been building in confidence and will be looking to put on an exciting show at the Arms Park.

Wilkins adds: “I think it is about using learnings that we took from the England game. England play in a similar way to France; their forwards are dominant, and we expect the French forwards to be dominant.

“It is something we need to be prepared for and we need to have a good understanding of our own back field coverage.

“They have a lot of strength in depth. Whoever is kicking we need to put them under pressure and not give them any easy outs or positions to allow them to kick however many 50/22’s they want.”

France’s head coach, Thomas Darracq, has called on his team to raise their performance levels going into their last two games, as they are still in with a shout for the title.

“Rugby is all about pressure, as long as we can keep our discipline we are in with a chance,” insists Wilkins.

“If you look back at the Ireland game, we gave away five penalties, we were very disciplined in our territory and possession.

“But when you look at the England game, we gave away around 30 penalties. There’s no game you can win giving away that many penalties.

“We need to be squeaky clean, and we need to front up. We are showing we can create chances, which is a positive, but we need to show as a team we can take those chances.”