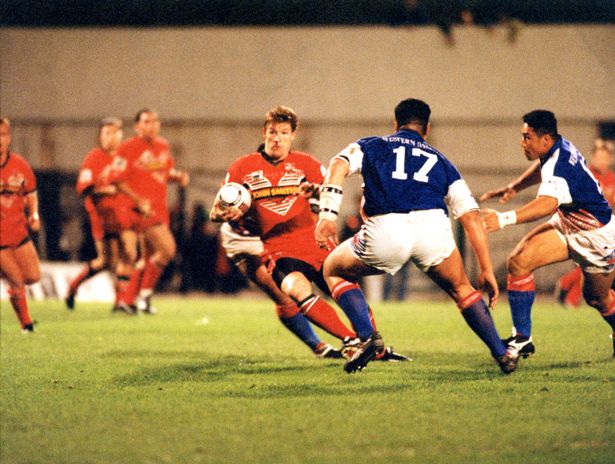 By the time the vaccines are all handed out, it could be October of this year and that may mean one of the first non-restricted tournaments is the Rugby League World Cup. With that in mind, Harri Morgan has been getting in the mood by re-watching Wales v Western Samoa back in 1995 – a classic that remains vivid for anyone who was there.

In theory, the line-up of sporting events scheduled for 2021 is an absolute belter.

The columns and comments should be fizzing with discussion of which players should make Warren Gatland’s Lions squad, whether Wales can repeat their 2016 heroics in the European Championship finals, and, of course, who will be the dominant force in Skateboarding’s Olympic debut.

The pandemic has no regard for ‘should’.

Instead, we are stalled on different iterations of a ‘will they?, won’t they?’ dilemma.

One international tournament that is not captured in this bracket, is the Rugby League World Cup.

This might be because it is deemed ‘safe’, given the vaccine roll-out and it not commencing until the back end of October.

Conversely, it doesn’t register on the public consciousness to the extent that its feasibility gets the air time attributed to other events.

If the latter is true, then this year’s tournament is a great opportunity to capture an audience.

Which game from each tournament are you most looking forward to?

Be the first to hear about the #RLWC2021 ticket sale ⤵️

Sports fans are likely to be desperate for whatever live sport they can get. Having been deprived for so long.

With a lack of rugby last weekend, I strapped into the YouTube time machine and landed at the Vetch Field for the Rugby League World Cup Group D decider between Wales and Western Samoa.

The prize – a showdown with England at Old Trafford for a place in the Final.

The date is Sunday, October 15th, 1995. A time when rugby league was far more prominent in the Welsh sporting landscape than it is today.

Prominent – but not universally popular.

Such was the impact of the talent migration from South Wales to the wealth of the M62 corridor.

Before I got into the action, I was compelled to take a detour. First stop, eBay, to try and locate one of the glorious Puma numbers donned by the Welsh players back in 95.

Next on the agenda was to establish who and what ‘L!VE TV’ was. I had assumed, prior to hitting play, I would be treated to 80 minutes of Ray French. Alas, the provider of the coverage was a channel that in 2006 saw its name changed to ‘Babeworld’.

The Welsh line-up is packed with familiar names – but Scott Gibbs was absent at right centre where he was replaced by John Devereux, with Adrian Hadley filling the vacancy on the wing.

Talking of which, Dai Young is one of a group of Welsh players who break the line, and march toward the Samoans during their dance-based communication of war.

A front foot act that typified Wales’ willingness to goad the Western Samoans into ill-discipline throughout the encounter.

As for the recently re-appointed Cardiff Blues director of rugby, I was intrigued to see how the scrummaging tight-head I watched in the late 90’s would go in a sport where a prop’s value is determined by the push and shove in the tackle, rather than the scrum.

The Pacific Islanders lose a man to the bin early on. A stiff right fend and charge for the line by – name drop alert – Scott Quinnell, ends with the ‘lock’ being hauled down just shy of the line.

Tackler, John Schuster – himself a dual code international having been an 80’s All Black – delays a quick play the ball.

Ropati, looks confused. I still am.

The subsequent penalty goal is missed, but Samoa play themselves into trouble trying to run the ball from their goal line.

The Welsh capitalise. Opening their account through a try from a 19-year-old full back by the name of Iestyn Harris.

The number one stepped up to first receiver, showed the ball to Devereux on the switch, before gliding between the would-be tacklers en route to the line.

The commentator asks, ‘does he like that, or does he not?’

There is such joy in watching players who make the game look so effortless.

Captain and stand-off, Jonathan Davies knocks over the extra two as the Vetch bursts into a chorus of Bread of Heaven.

Davies misses an opportunity to extend the lead, after Samoa are penalised for the use of the forearm in contact.

The commentators are concerned about the ‘outbreak of World War 3’. Paul Moriarty is not.

Wales’ lead is only four as the players scuttle down the tunnel.

📢 We are on the lookout for a Sports Presentation partner to work with us across the 21 venues & 45 matchdays.

Creatively working with us to excite our in-venue crowds and deliver a world class experience for those watching at home.

A solo effort from a beautifully scrum-capped, Vila Matautia, is cancelled out when Davies identifies space and punts long on tackle one.

He backs his horse, and Anthony Sullivan doesn’t disappoint – outstripping his opposite to toe poke the ball over the line and dot down for the try.

Both scores are converted, with Schuster adding two further penalty goals – one a monster from just shy of halfway – to Davies’s one.

Samoa make it abundantly clear early in the second half that if Wales want a path to victory they will need to take the rough with the smooth – or the rough without the smooth.

Ropati drops a knee into the Welsh captain early doors, before an off the ball incident involving Matautia and Moriarty sparks some grabbing and jabbing – mostly grabbing.

The crowd are having it.

A team made up predominantly of economic migrants, once accused of being mercenaries and disloyal to their nation, were absolutely revelling in the red of Wales.

Each ferocious collision a middle finger to their band of detractors.

2/2
And on Sunday, Wales take on Western Samoa in the 1995 #rugbyleague World Cup when a packed Vetch Field, Swansea, witnessed an absolute cracker. The full match kicks off at 3.00pm.@WelshCharRFC @TheRFL @WalesRugbyL @RLSamoa @RLWC2021 pic.twitter.com/xcILrf8fRS

Western Samoa’s discipline costs them. Des Maea puts a high shot on Wales’ left centre, Alan Bateman, and is sent to the bin.

The Welsh skipper nudges an important goal to put his side ahead by two scores, having earlier knocked over a drop goal with Wales struggling to breach the Samoan defence.

Willie Poching looks to have set-up a grand slam finish when he drives for the line. Poching thinks he has scored.

Referee Smith is having none of it. Replays indicate Poching had a strong case.

Wales were on the right side of a couple of handy decisions from the man in the middle.

Although, Brian Laumatia was lucky not to get marched for throwing one at Scott Quinnell, who had done well to avoid a clothes line from his Wigan team mate, Va’aiga Tuigamala, just seconds before.

Quinnell got his retribution, and Smith let both men walk free.

The victory was secured by a late one pointer from the boot of Harris, and a later still try from Kevin Ellis, who was the beneficiary of a Samoan error as they chased the game from deep in their territory.

Watching Wales v Samoa from 1995, brutal game. Reckon that Wales league side would have run Wales union side close at the time. Rugby League dropped the ball not putting a side in Swansea or Cardiff of the back of the Wales world cup performances. #scrumv #RugbyLeague

A superb victory for Wales, in front of a passionate crowd of over 15,000.

A day of the like, Welsh rugby league may never see again.

With Tonga and Papua New Guinea, both of whom defeated the GB Lions in 2019, awaiting in the group stages this year – the struggle, as they say, will be real.

Oh, and as for Young Dai, he goes pretty well as an all action, ball-carrying, big-hitting, league front rower.

Even dropping a hint of a left foot step during one rampage.