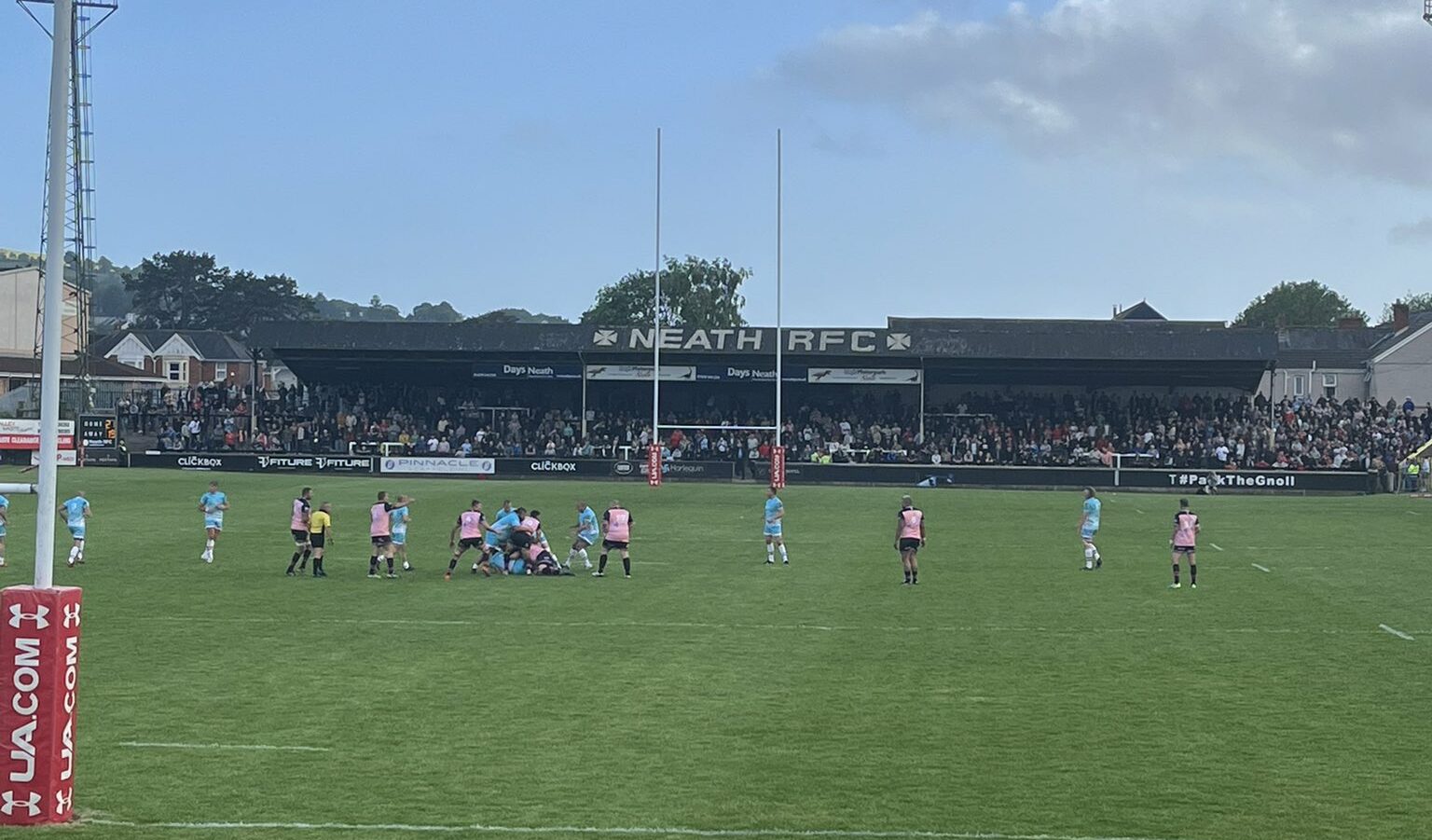 A crowd of around 4,000 watched the James Hook testimionial match. Pic: Paul Kift.

A night to celebrate James Hook’s testimonial in Neath produced a high-scoring encounter as some of Welsh rugby’s biggest names turned out to honour a true great.

The match at The Gnoll was the one of the highlights of former Wales, British & Irish Lions, Neath, Ospreys, Perpignan and Gloucester star Hook’s testimonial year.

A James Hook Select XV took on a Classic Lions side in front of an impressive crowd of around 5,000 – and Hook’s heroes edged it, 45-43.

The likes of Shane Williams, Mike Phillips, Phil Vickery, Colin Charvis, Allan Bateman and Mark Taylor all turned out to impress those who turned up.

The Gnoll was a fitting place to host Hook’s testimonial given it was also the venue for his first and last professional games.

Hook and his three children were cheered on the field while both teams posed for a group picture before kick-off.

The first tryscorer was no surprise.

As the Classic Lions looked for a response they were undone by a Taylor intercept.

Great to watch James Hook’s testimonial match at the Gnoll this evening. pic.twitter.com/BASDLeYhew

But the Lions got on the board through Nick Williams who immediately decided he’d had enough. The Lions then made it two with a penalty try after Charvis knocked on.

Phillips looked up for the battle and danced through midfield, engaging in a spiky contest with Martin Roberts.

Jonathan Thomas grabbed the second for Hook’s side which was improved by the man himself.

Matthew Rees then spilled the ball over the line before Hook rolled back the years to jink his way over the line in trademark fashion.

The Lions grabbed one back after Williams raced clear and produced an outrageous no-look pass to Michael Paterson.

Will Price grabbed the first of the Lions’ next two scores before Williams’ dancing feet again wowed the Neath crowd.

Hook’s son Harrison stepped up to convert the try in expert fashion.

It wasn’t enough to stop Hook’s side turning around 36-28 behind.

At James Hook’s Testimonial game in Neath. Mike Phillips has already smashed one player, hit a ‘ruck’ like it’s the World Cup final and shoved Martin Roberts off the ball after he tackled him. #somethingsneverchange @HookTestimonial

The scoring rate slowed at the start of the second half as both teams tired.

Former flanker and Wales captain Charvis, now 50, proved he can still jackal by producing some fine breakdown work to win his team a penalty.

Aled Brew then raced to the corner for the first try after the break and Maama Molitika responded for the Lions.

Hook’s XV had to chase the game in the final quarter with the main man’s team 10 points down.

Both teams kept the substitutions flowing in true testimonial fashion.

Charvis then produced another fine breakdown exhibition allowing Hook’s team the chance to set up a trademark set-piece penalty move from down the years.

Soon after that Hook got his second of the night scoring close to the posts.

After a hugely successful career inc 81 International Caps, 2 Grand Slams, & 3 Rugby World Cups, Acorn’s Business Development Consultant James Hook will be taking part in his final testimonial match and dinner tonight.
If you are attending be sure to give him an extra loud cheer! pic.twitter.com/Rc8fS0zyb9

Harrison Hook then appeared from the sidelines to convert once again to huge cheers from the Neath crowd.

A brilliant try-saving tackle from former Cardiff No 8 Nick Williams kept the Lions just ahead by three.

Shane Williams turned down three simple points and a possible draw to tap and go but then saw his team concede a breakdown penalty.

He ghosted through a gap with a show and go and from there he kicked ahead with Brew racing on to the ball to score.

It proved to be the winning try as both teams embraced and signed autographs at the final whistle.