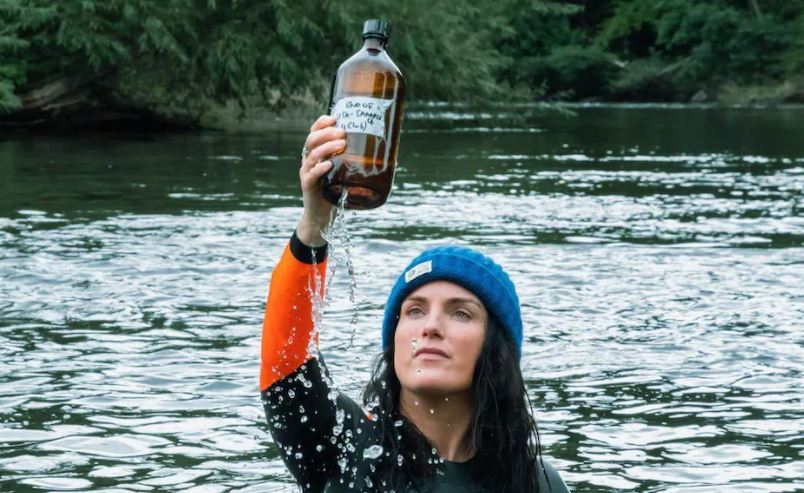 Open water swimming has seen a rise in participation numbers during 2020 as more people have turned to the sea, rivers and lakes for their physical activity. Some, like Laura Owen Sanderson combine their swimming fix with helping protect the waters around them as she tells Graham Thomas.

Laura Owen Sanderson calls herself a “waterlogger”, a wild swimmer, an adventurist, environmentalist, artist, company director and a mum.

She also happens to be the woman Bangor University have asked to help collect water samples from the UK’s national parks in order to test for the presence of micro-plastics.

Combining open water swimming with environmental research and campaigning feels like a natural fit for someone who took to the water as a form of therapy following her own personal biological disaster.

Laura – who is a speaker at this year’s Kendal Mountain festival (Nov 19-29) – was in a senior position in teacher training in Llandudno before becoming ill and turning to swimming.

“Basically, I burnt myself out and got really ill,” she says. “I got diagnosed with fibromyalgia and needed a full blood transfusion.

“My muscles became extremely stiff and one doctor suggested I take cold baths. I didn’t want to do that, so instead I started going into the sea by my house to swim and I soon found it alleviated my symptoms.

“I became a bit addicted to it, I suppose, and then I started to swim the rivers and lakes in the mountains and that was it. I was hooked.

“It’s a combination of the freedom you feel, the beauty of the surroundings and the natural pleasure of being in open water.”

What began as an antidote to stress, became an obsession and then a business as Laura founded We Swim Wild, a not-for-profit company that promotes open water swimming and environmentalism.

It’s growth has coincided with the boom in interest in taking to the coastlines, rivers and lakes of Wales as a form of recreation and exercise  – an upsurge of activity that appears to have grown since the first lockdown and the restrictions on more formal, organised forms of sport.

Like walking, or running, open water swimming involves nothing more than taking to the natural world, although open water enthusiasts stress the need for planning, preparation and safety.

“You need to educate yourself about the different types of water,” says Laura.

“If you’re a sea swimmer, you need to know about the local tides and rips and know the best times and you should always try and have a swim partner.

#waterloggers are gearing up to launch on Oct 31st! Swimmers up and down the country, taking on the biggest #citizenscience study on microplastics in UK waters. Gathering evidence to tackle authorities to start testing for #microplastics pic.twitter.com/DMeukI5ylC

“You need to know about currents in rivers, how to swim parallel to a river bank or the shore, check the temperatures and the weather forecasts and the right equipment to have with you. So.

“There’s lots to consider. But it’s just about being sensible and minimizing the risk.”

Laura’s tie-in with Bangor University and the national parks project came after a previous piece of research she was involved with, which looked at the water at Glaslyn, near the summit of Snowdon.

Academics wanted to see how far along its journey to the coast, the water became polluted with micro-plastics so asked Laura to swim the route and take specimens as she went.

To their dismay, researchers discovered that even the source water itself is contaminated with tiny particles of plastic.

The current research is examining the water purity across the UK’s 14 national parks, including the three in Wales – Snowdonia, Pembrokeshire Coast and Brecon Beacons.

“I swim with one other person who is on a pack raft, and I hand the samples to them as I fill the four bottles at a time,” says Laura.

“You have to be in the middle of the water flow and take the sample about 10cm under the surface. They’re big bottles and when they’re filled they’re quite heavy.”

When she swam 47km along the River Cleddau, in Pembrokeshire, it wasn’t the plastics that that proved the only concern. She became ill and believes agricultural slurry running off the banks into the water caused her stomach bug that forced her to stop swimming for a week.

“At one point, I was swimming along, and cow pats were floating by so that wasn’t very pleasant.

“There is supposed to be a 10-metre buffer between the agricultural land and the river, but that’s not very much at all when there has been a lot of rain.”

Cow pats aside, Laura – whose life as a swimmer and environmentalist is captured in the film “Hydrotherapy” which is featured at the festival – has certainly not been put off the open water.

The current pandemic may have slowed the completion of the national parks research, but it has not slowed interest in her swimming across the sporting world.

“I have taken out a lot of triathletes this year for instruction classes,” adds Laura, who works alongside Dr. Christian Dunn, a senior lecturer at Bangor University.

“They are normally super- fit but sometimes they get a bit scared in very cold water. Maybe it’s because they’re a bit younger and haven’t got any blubber to support them, but they end up loving it once they get used to it.

“That’s the thing about swimming in lakes, rivers and the sea. It’s very addictive.”