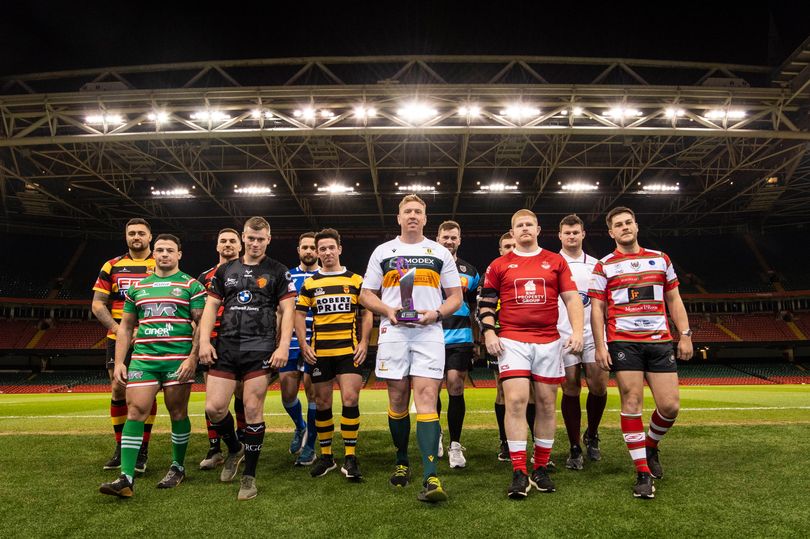 Clubs have been forced to adapt their own trophies. Pic: WRU.

Mountain Ash adapted an old darts trophy and Llandudno re-used their 2019 league title glass bowl as clubs around Wales continued to improvise at the end of the season to mark their achievement in coming out on top in the Admiral Leagues.

Championship winners Bargoed set the tone when they made their own banner and used an old trophy to mark their success in getting into an unbeatable position in the Championship, despite not completing all the fixtures.

The WRU indicated at the start of the season there would be no promotion or relegation in a campaign dedicated to getting clubs back into action after COVID restrictions were lifted, but the way everything has ended has left many bemused and angry.

Many clubs have refused to complete their seasons, citing cost and play availability issues, yet many divisions across the country have played to a point where a winner can be established.

“We took a commonsense approach in North Wales over unfinished games. Other clubs didn’t want to complete the season, so we rang Nant Conwy, who were top, and Bala, who came to play us in their last game and decided that the champions would be declared after our game,” said Llandudno chairman Robbie Shields.

“Nant were top, we were unbeaten in second place and Bala could have finished third. In the absence of anyone letting us know how or if a winner would be declared, we mutually agreed that Nant would be champions if we lost, and we would be if we won.

“This is our 70th anniversary season and when the WRU ended the season in 2019-20 due to COVID we had won 15 games in a row and we were well on our way to defending our title. No winners were declared then and we felt the players deserved something to show for their effort through another difficult season.

Great Day yesterday 1sts finishing top of the league & @bargoedwarriors getting to the final💪🏽 pic.twitter.com/tdBsVOcIZg

“After we won, I took out the old trophy we were presented with in 2019 and represented it to the team. I just hope we are given another one for this season’s effort.

“It often seems to us that nobody really cares about rugby in North Wales. Our feeling is that the WRU should have made a commonsense decision to help save the integrity of their competitions.”

The Goats have become the dominant side in the north over the past four years, losing only one game in 44 league fixtures. Prior to that they had three successive fifth place finishes and a fourth place after winning the Division 2 title in 2014.

They easily came out on top against Bala, scoring seven tries in a 37-12 home win. Scrum half Byron Davies got two of them and kicked a conversion and Connor Harding also bagged a brace.

The other tries came from Delwyn Jones, Lloyd Evans and Brian Pike as The Goats ended on a high with a perfect nine out of nine record. Nant Conwy were second and Bala ended up in fifth, just behind Bethesda and Ruthin.

Llangennech finished on top in Division 1 West thanks to a 36-22 win at Aberystwyth. That took them two points above unbeaten Newcastle Emlyn having played one more game.

They picked up a bonus-point with a penalty try as they outscored the home side by four tries to three. Centre Ryan Nunes, lock Sam Melmoth and No 8 Craig Thomas got the other tries and Osian Evans kicked 14 points.

Having lost their only league game 29-20 at Newcastle Emlyn, they will now look to gain some revenge in the West Wales Cup final on Saturday when they meet them again.

Mountain Ash maintained their unbeaten record as they made it a perfect 10 out of 10 in Admiral Division 1 East Central as they beat title rivals Treorchy 23-8.

Congratulations to Llandudno RFC 🐐
Kings of the North, again, winning the Division One North Title.

Over 44 games unbeaten in Div 1.
They could quite well be, the GOAT North Wales side.
How does their current side compare with other top North Wales sides of the past? pic.twitter.com/SOQdgIUdxy

A crowd of almost 500 tuned up to see the battle of the two unbeaten teams in the league and they were rewarded with a full-blooded affair in which two interception tries from the home back line turned the game on its head.

In what was the final game of the league campaign for both sides, the incentive for the home side was to complete their 100% record and stop Treorchy from taking any points away with them. They did that to end on 45 points from 10 games.

That meant that even if the Zebras had been able to scoop the maximum 15 points from their three unplayed game, they would not have been able to overtake The Old Firm. Club secretary Mark Bennett ensured there was something to give to his players by taking an old darts trophy off one of the club shelves to mark a significant moment in the club’s history.

Outside half Callum Hall got them off the mark and then converted the first of two breakaway tries. Wing Declan Conway picked off the first interception score from just inside his own half.

Lima Lloyd kicked a first half penalty for Treorchy and Hall added a second to make it 13-3 at the break. In the second half, home full back Jarrod Cushion raced in from 70 metres after intercepting a wayward pass and Hall’s conversion and third penalty completed the scoring.

Treorchy grabbed a consolation try from Ellis Fackrell, but it was another defeat for the Zebras to follow on from their loss to Penallta in the WRU National Plate final at Principality Stadium.