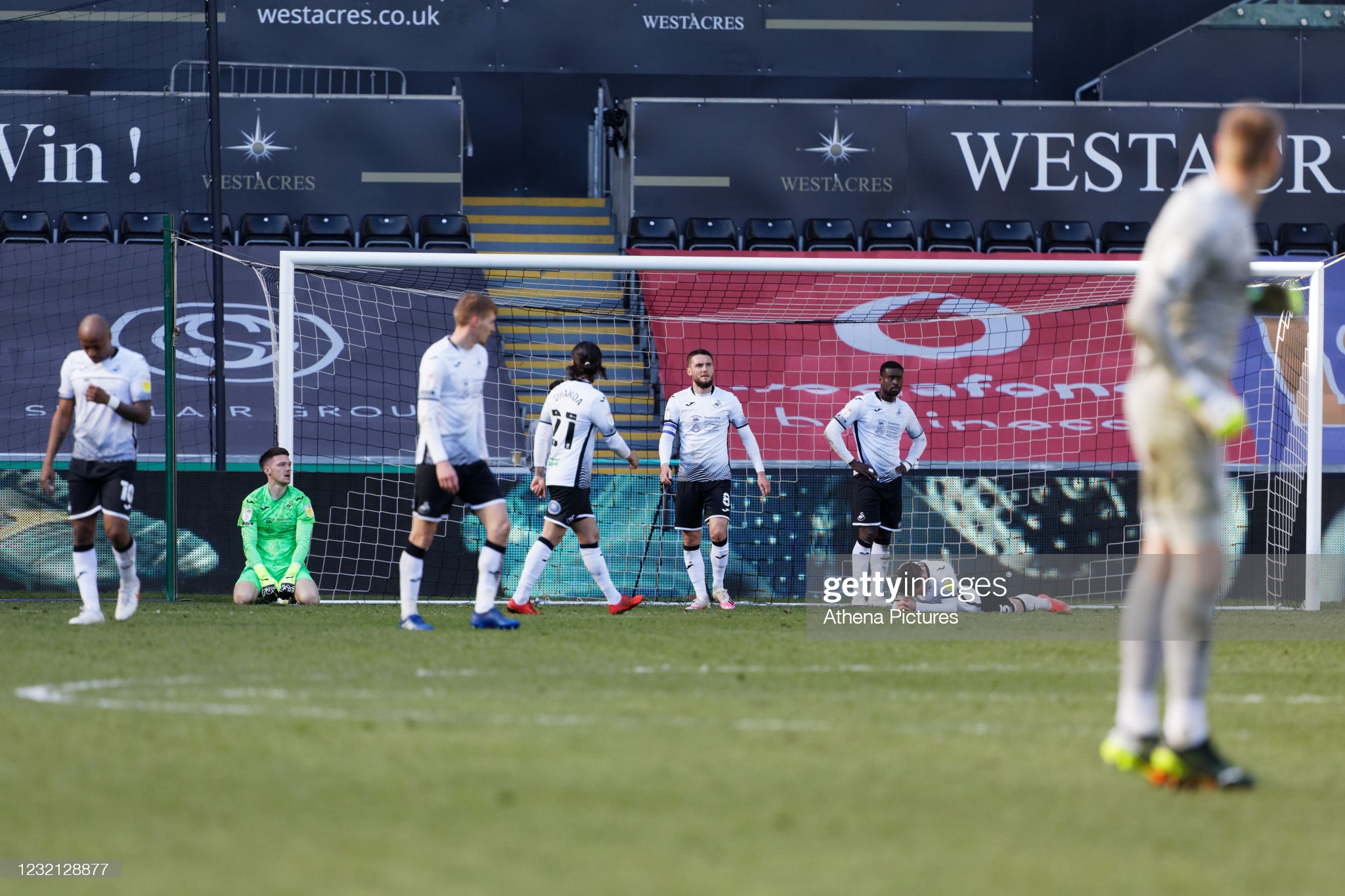 Steve Cooper has been adamant that Swansea City are not about to throw in the towel – but they do need to deal with what others are throwing at them.

Despite the huge 10-point gap that now separates the Swans from the automatic promotion places, their head coach has insisted they will continue to try and chase down second-place Watford.

But Cooper is equally clear that if they don’t improve their weakness in dealing with long throws, then even a play-off place may prove beyond them.

Monday’s 1-0 home defeat to Preston was Swansea’s fourth in succession – giving them the worst current form of any team in the Championship – and the injury time goal conceded again stemmed from an opposition long throw.

Back in February, Cooper’s side boasted the best defensive record in the Championship, but now a run of just one clean sheet in eight games has been compounded by three of those losses all coming from the same source.

Against Cardiff, it was a long throw into the area that led to Adam Flint’s winner, the same scenario prompted the injury time penalty at Birmingham, and against Preston it was another hurl into the Swansea box that inadvertently led to Matt Grimes’ own goal after a shot by former Swans hero Scott Sinclair.

“You could say we’re a little bit unfortunate with the ricochets and how it [the goal] has gone in but that’s three long throws in three games where we’ve conceded and lost games. That’s an issue,” conceded Cooper.

“We know that we’re not looking as much of a threat as we should do. We don’t look like scoring a goal. They’re the two things, without having too much time to reflect, that are playing on my mind at the moment.”

Preston interim boss Frank McAvoy admitted it was a Swansea flaw that his side had planned to exploit. Consequently, Tom Barkhuizen proceeded to pepper the home side’s area at every opportunity.

“We thought our long throws could cause Swansea some issues,” said McAvoy.

“The analysts had fed that back to us. In the game against Birmingham, they conceded the penalty kick from a long throw and we just thought with our size and presence at times we could get first contact and look for the second ball.

“We actually tried it against Norwich (on Friday) where we felt we could be a threat from throw-ins and today was a good opportunity for us to do it again.

“Tommy has got it in his armoury. And we’re fortunate enough that one fell for Scotty.

“It’s come off the Swansea boy but he’s there and sniffing about as we’d expect and we got the win.”

Next up for Swansea it’s Millwall on Saturday lunchtime. Gary Rowett’s side notched a good win at Stoke yesterday and still harbour feint hopes of the play offs – something evident by dint of the fact they sent a scout to the Liberty Stadium on Monday.

He, too, would have noted the throw-in issue as he reports back to a Millwall outfit who are on a three-match winning streak.

There are many areas Cooper and his players will have to address in the final seven games of what is now shaping up to be a tense play-off race – but cutting out soft goals from long throws appears to be one of the primary targets.

One thought on “Throwing It All Away . . . Swansea City’s Steve Cooper Gives Set Piece Confession”