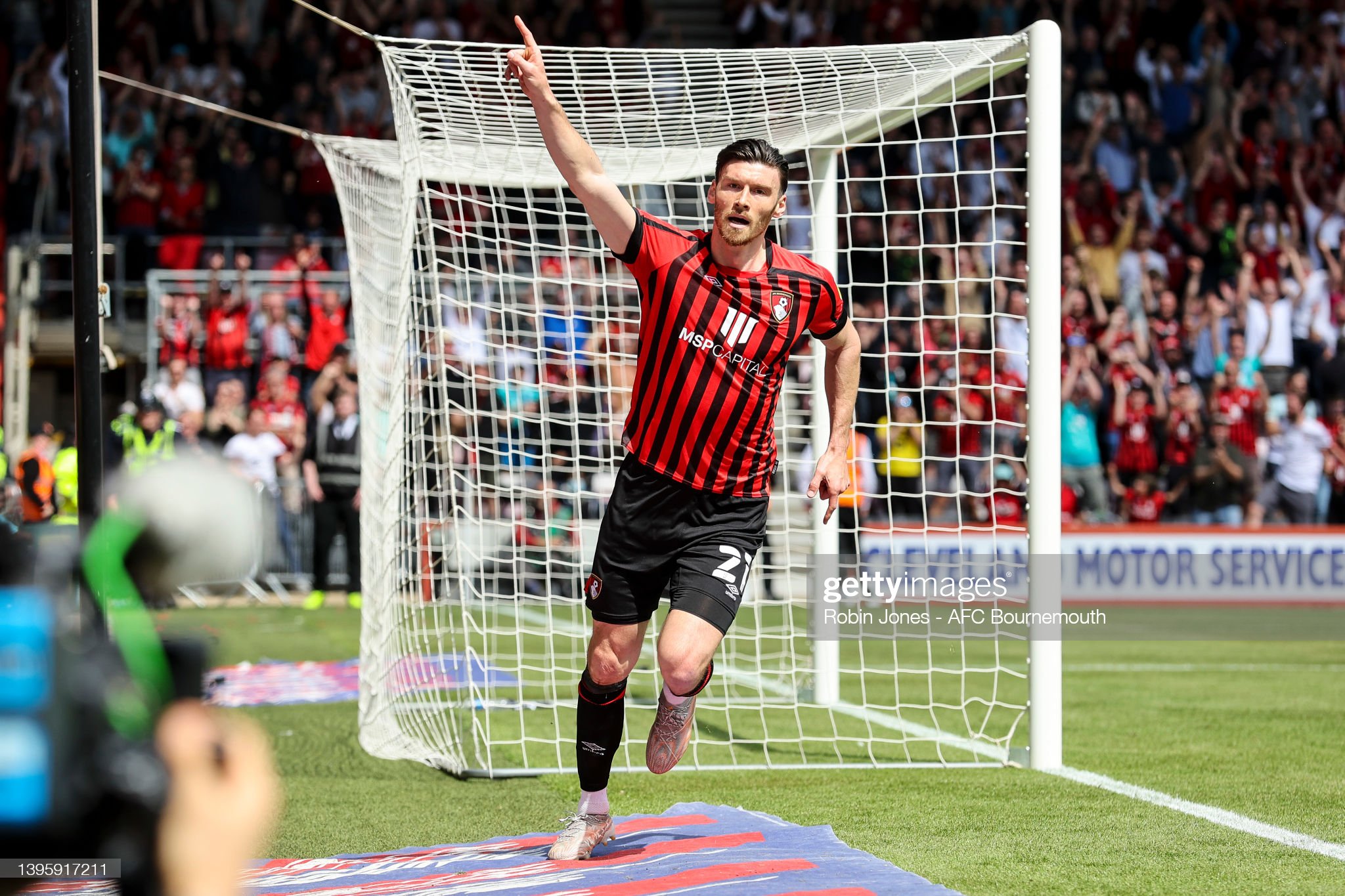 Kieffer Moore has been in brilliant recent form for Bournemouth. Pic: Getty Images.

It’s coming. D-day for Wales in their bid to make the World Cup finals. But few things are certain about this fixture, including the eventual full starting team that manager Robert Page will plump for. Daniel Parker reckons nine are nailed on, but two more will keep us guessing . . . and arguing.

Sunday 5th June – it’s getting a bit close for comfort now, isn’t it?

We’re less than three weeks away from Wales men’s golden opportunity to end 64 years of hurt by qualifying for a World Cup, and there remain a host of Rusmfeldian “known unknowns” in play.

The most obvious of these is who the opponents will be: foes of yore Scotland or Ukraine, fresh off the back of Eurovision glory and carrying the well-wishes of neutrals around the world.

Another unknown – and the one that will doubtless have Robert Page tossing and turning through sleepless nights – is which 11 players will take to the field in red at Cardiff City Stadium.

On the face of it, there aren’t that many big calls for Page to make: Wales may have better strength in depth than they have had for years (ironically, more than they did when they reached the Euro 2016 semi-final) but as many as nine places in the starting XI are effectively nailed on.

Four of these “irreplaceables” – Gareth Bale, Aaron Ramsey, Joe Rodon and Danny Ward – are all short of game time at their clubs this year, but consistently deliver at international level even when they come in from the cold.

Fitness permitting (touch wood and cross every possible finger) all will start on 5th June.

You can add Narberth’s most-beloved poultry conservationist Joe Allen to that list.

The “Welsh Pirlo” has been a vital cog in the Wales midfield for a decade now, and dictates the pace of attack.

You could argue that he’s been less influential since returning to action from a ruptured Achilles tendon in 2020 – and ongoing speculation around his club future is undoubtedly a distraction – but Allen is a big game player.

We saw that when his enforced exit in the gut-wrenching 2018 World Cup qualifier against Ireland turned the tide of the match. Surely, he starts against Scotland/Ukraine.

Defensive lynchpin Ben Davies, now fully in favour at Spurs, is another definite starter, as are wingbacks Neco Williams and Connor Roberts.

Both have been in flying form at club level over recent months and Page deserves huge credit for developing a cogent system that can incorporate two mercurial right-backs.

I would also add Daniel James to the list of Wales’ untouchables.

His season with a struggling Leeds United team has been a mixed-bag – not helped by being picked out of position for large swathes of the campaign – and goals have been in relatively short supply.

Dan James “Feels Terrible” . . . And Red Card Means His Next Games Will Be For Wales, Not Leeds United

James has still cropped up with some vital assist, though, and his electric acceleration – comparable to a souped-up Yamaha motorbike competing in the famous Aberdare Park Road Race in his late father’s native Cynon Valley – is a potent weapon.

He’s not just a pace merchant though: James’ distribution is superb, and he’s been the cornerstone of the pressing, defensive game Wales  have operated so well over the last two qualifying campaigns.

Yes, his finishing will need polishing, but James already makes up for that with his skill-set, application and work-rate.

He is a vital player for Wales in the here and now and will, surely, only grow in influence over the next decade.

Presuming those nine players all feature, the make-up of the remaining two starting places will be all-important.

Given that Wales went with a secure 5-3-2 against Austria (albeit incorporating two very attacking wingbacks), you would expect more of the same in June.

That leaves room for another defender to step up into the backline, with Ethan Ampadu in pole position to resume the mantle at centre-half.

Ampadu has enjoyed a decent enough season at Venezia, even with I Lagunari now on a one-way gondola ride out of Serie A, but he remains something of a forgotten man at his parent club Chelsea.

Still only 21 (despite seeming to have been around for ages), Ampadu will now be pondering whether his future lies as a perennial loanee in exile from Stamford Bridge.

Ethan Ampadu has had a quietly excellent loan move. 👏🏻

He has played for a horrific Venezia side, yet has managed to shine. 💫

This was a last minute deadline day move, as Ethan was meant to stay at Chelsea until deadline day, making the loan even more impressive. 💎 pic.twitter.com/jlSZU4kby4

Irrespective of his fortunes at club level, the Exeter-born Welshman never seems to let his country down, and Page will have no hesitation about starting him in a game of this magnitude.

The recent injury to Swansea City’s Ben Cabango – a player who has grown in confidence this season – probably means that Amapdu’s place is secured; with Bournemouth’s Chris Mepham and Luton’s Tom Lockyer recent returns to club action probably coming too late to force them into contention.

Unless Page chooses to throw caution to wind and ditch a defender for the play-off final – an incredibly unlikely scenario – that leaves just one starting spot up for grabs.

Three players will fight for it: Harry Wilson (who started and impressed against Austria in March); Brennan Johnson (who has led Nottingham Forest’s push for the Premier League this season); or a returning Kieffer Moore, whose comeback from injury proved the decisive factor in Bournemouth clinching automatic promotion to the Premier League this month.

On form alone, each player merits a start.

If continuity is Page’s preference, Wilson – fresh off a stellar campaign with Championship winners Fulham – may be the rational choice.

But there’s also a strong argument for starting Moore: he has a proven track record of scoring big goals for Wales against quality opposition and is the most effective out-and-out target man the national side have fielded since John Hartson.

The relative lack of height in both the Scottish and Ukrainan defences may well tempt Page to throw the big man into the mix.

On the other hand, selecting Moore up front would mean giving a midfielder the axe: and who do you cut out at this stage?

Is it more likely, then, that Moore – and Brennan Johnson – will feature as gamechangers from the bench?

The question of who else might make a cameo appearance (perhaps after the half-time oranges are divvied out) will depend on the specific circumstances on the night.

The affable Sorba Thomas has also returned from injury at the right-time; while veteran frontman Sam Vokes is looking back to his best at promotion-chasing Wycombe.

Might that kind of experience be handy to have in tow next month, especially if Robbie Savage is to repeat his classic commentary haiku about waking the kids up in the event of something special happening? Who knows?

What’s certain is that we all have a few sleepless nights ahead of us – and getting forty winks on June 4th might be particularly hard.

Who would have it any other way, though?

In Page we trust.